Photo by Mark L. Baer — MLBaer Photography Millie gets some serious hangtime after launching from the dock during a Dock Diving event. 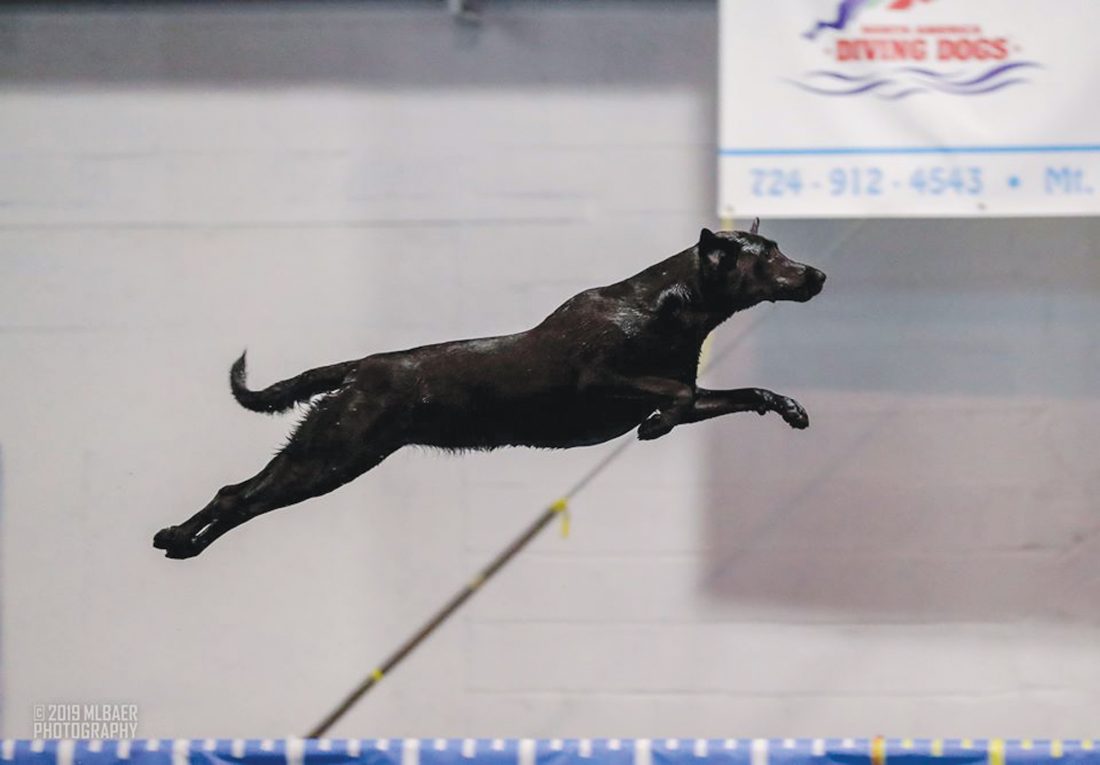 Photo by Mark L. Baer — MLBaer Photography Millie gets some serious hangtime after launching from the dock during a Dock Diving event.

Some people take their dogs places.

In the case of Walt Stover of Tidioute, Millie is taking him to Orlando.

They’re a team, but Millie does the hard work.

In 2018, Stover was preparing a young Millie to hunt with him. 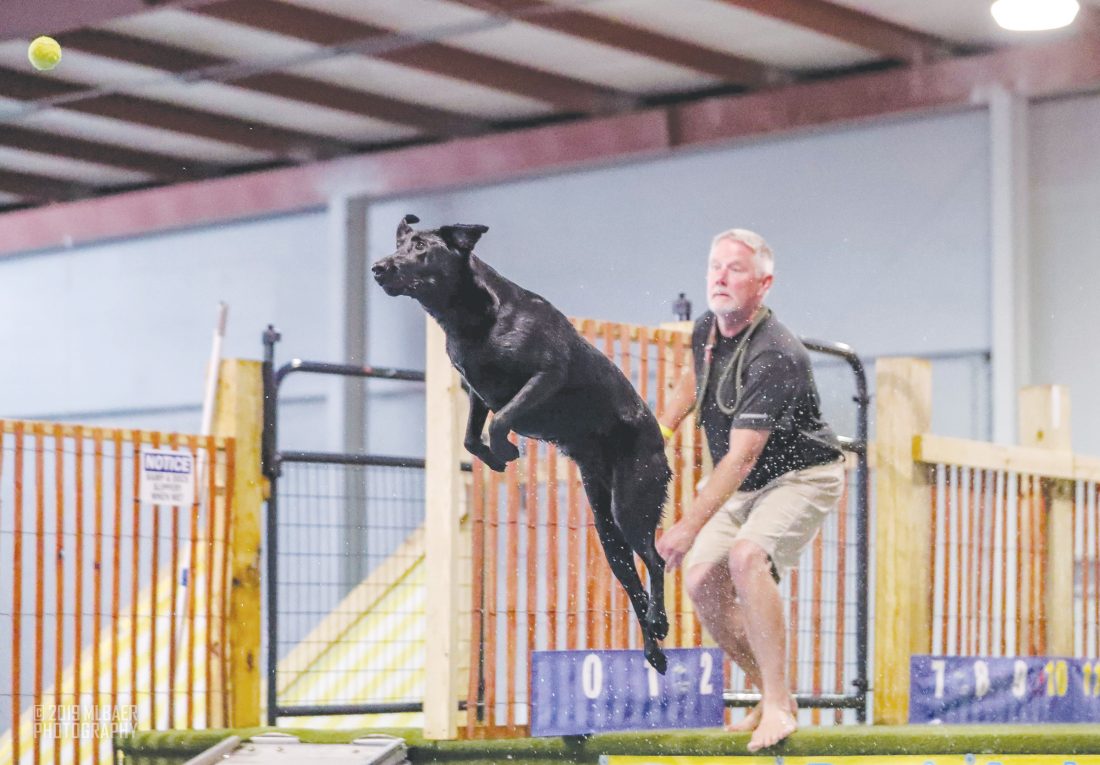 “Being a lab, she loves the water,” he said.

But there was more.

“As I was training her to retrieve ducks, I noticed how much she loves to jump,” Stover said.

To let her have some fun, “I took her down to the Tidioute Boat Launch.”

She did have fun. He had fun. She was jumping a long way.

“I got a wild idea, found an outdoor show in Bath, N.Y, in October 2018,” Stover said. “Dock Dogs had their pool set up. It was part of the event. We went up and entered.”

Dock Dogs and North American Diving Dogs (NADD) are the governing bodies of the sport.

Having never jumped competitively before, Millie was in the novice division. “She was jumping 14 to 17 feet. We brought home ribbons.”

“We were kind of hooked at that point,” he said. “I’ve been spending money ever since. This isn’t a way to make a living.”

Since then, Millie and Stover have been practicing.

Liking water and being a jumper aren’t enough.

“What people don’t realize is how much time goes into training,” he said. “You have to spend a lot of time with your dog. But, that’s why you have them in the first place.”

Stover’s job at the pool is to throw a toy into the water for Millie to try to grab. “What I’m throwing out there is like a tennis ball,” he said. “I need to time it so she’s not only going out, she’s going up. I want her focused on it and right in front of her nose. If I can time it just right… that’s incentive for her.”

Learning the sport and practicing with Millie, “keeps me out of trouble,” Stover said.

He expressed his thanks to the Spargo family. “They have a pond with a dock on it,” he said. “It is 40 feet long, two feet off the water. That’s what a regulation dock is.”

“I can’t ask for a better training facility and I’m allowed to use it,” Stover said.

And use it they have.

“Through the summer, pretty much every night after work,” Stover said.

Jumping into freezing water isn’t ideal, so finding an appropriate place for winter training is more challenging. “There’s an indoor facility in Mount Pleasant,” he said. “Through the winter months, you can get pool time.”

She is now averaging 19-feet 3-inches on her jumps, Stover said.

That puts her near the top of the senior division — dogs that jump 15 feet to 19-feet 11-inches — of larger dogs like Millie. The ‘lap class’ includes dogs under 16-inches at the withers.

The open class senior division is the biggest group. “That’s where most of the dogs are,” he said.

Some dogs don’t get close to 15 feet. “You get dogs that are only jumping two, three feet,” Stover said.

Then there are dogs that soar well past 20 feet.

The Masters Division starts at 20 feet and goes to 24 feet where the top group — the Elite Division — begins.

Any dog can participate.

Labs are popular and good at the event.

“There are labs that are consistently jumping well into the 20s,” he said. “I’ve seen Yorkie terriers to great Danes. I saw a whippet jump 33 feet.”

That’s close to the record for the distance event.

So far, Millie and Walt have been to regional events from Mount Pleasant — as recently as New Year’s Eve — to Buffalo and Ohio, and less regional events in Maryland and Virginia.

“Last night I got the invitation for the National Championships for NADD in Dec. 2020,” Stover said.

That’s even less regional. It’s in Orlando, but he didn’t even think about not going.

“I’m going to nationals,” he said.

“Qualifying to go to National Championships, you have to jump at the top end of your division,” he said.

They’ll have a shot to do well at that event. Recently, Millie has been ranked from fourth to seventh in her division, Stover said.

Distance isn’t the only NADD event.

Millie is working her way into those.

They have not tried speed retrieve, but they are signed up for it at a competition this month in Maryland.

During competitions, there is a lot of chaos.

“The first thing that caught me off guard was the number of dogs that are around,” Stover said. “There are dogs that bark a lot and dogs that don’t bark at all. There’s a lot of commotion going on around you. You have to get used to it.”

The participants get locked in when it’s their turn.

“When you get up on the dock, it’s just you and it’s nice and quiet,” he said.

He said there are people who take the events very seriously. “Most of them are there to have fun with their dog and watch them jump,” he said. “People have been very nice. They’re helpful — giving me hints.”

Stover likes to see Millie do well, but that’s not the goal. “I have a lot of fun with her and she enjoys it,” he said.

There might be a little more pressure in Orlando.

“We all have aspirations to be national champions,” Stover said. “There’s never been a dog from Tidioute jump in a National event.

“I’m going to the National Championships with a dog from Tidioute,” he said. “We’ll see how bad the announcers butcher the name.”