Times Observer photo by Brian Ferry Maddie Walker (left) and Sky Kophazy test the bridge they made in the spontaneous event at the annual Technology Ingenuity Challenge Saturday at Edinboro University. 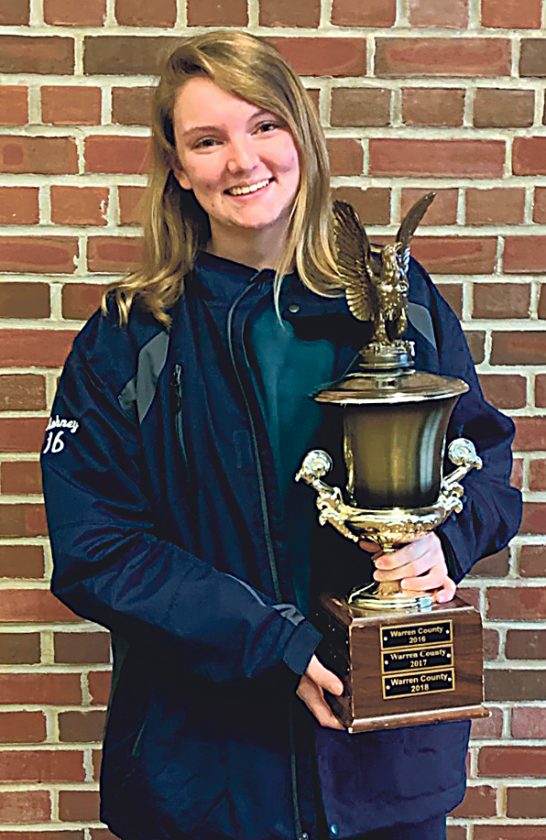 For the next year, and the fourth year in a row, Warren schools will keep the Koehle Cup.

It wasn’t just the Sawyer Mohney show, but the Warren Area High School senior played a key role in the competition and in the discussion after.

The Koehle Cup is awarded to the team champion at the Technology Ingenuity Challenge, held Saturday at Edinboro University.

A school’s standing is based on points awarded to students for placing in the different categories and different events. 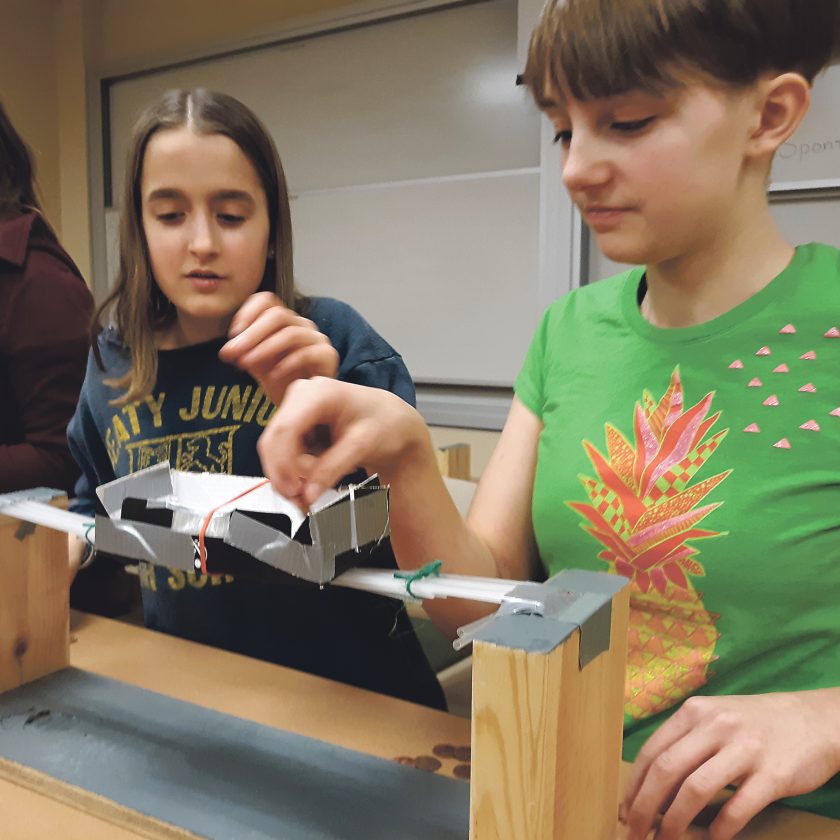 Times Observer photo by Brian Ferry Maddie Walker (left) and Sky Kophazy test the bridge they made in the spontaneous event at the annual Technology Ingenuity Challenge Saturday at Edinboro University.

At each grade level, there were five first place awards, five seconds, and five thirds.

Students in grades six through eight created mousetrap-powered cars. Freshmen and sophomores made CO2 dragsters. And students in 11th and 12th grades put Tug O’ War Bots to the test.

The youngest students focused on accuracy. Their vehicles competed in a Mousetrap Tractor Pull, with the goal of pulling a weight six feet to the center of a bull’s-eye.

The middle group had a need for speed — their dragsters were pitted in head-to-head races.

And the upperclassmen were all about power. The Sumo Bots competed one-on-one in a tug of war — winner take all.

At each level, students created detailed drawings of their vehicles. Judges scored each entry on creativity and craftsmanship. And students gave oral and written presentations about their work.

Juniors Trey McMichael and Serenity Eggleston worked together on their bot, winning a first in presentation and a third in craftsmanship.

Seventh grader Maddie Walker finished in second in the mousetrap competition. She was awarded first place for both her craftsmanship and presentation.

“I was proud of this school” for winning the Koehle Cup, Walker said. “We all gave of our time after school to do something great.”

Her dragon-themed car scored 16 points out of a possible 30 — hitting the bull’s-eye for 10, and adding a four and a two.

“The hardest part was getting the right amount of traction,” Walker said.

Some of the vehicles didn’t go at all. Some went off at an angle.

All of the mousetrap cars used the same method of locomotion. “We wound up a string on the axle,” Mowrey said. The string was tied to the trap. “When we let go, the force of the mousetrap would make it go.”

Mowrey scored 11 points with a best of 8. The top three runs out of four were counted. “I was surprised how well it did,” he said. “When I tested it before the competition, it didn’t get any points.”

During development, Mowrey’s car broke a number of times. He hopes to return to the competition and avoid that next year.

Every student – some in groups – competed in the spontaneous event. Each year, organizers come up with a challenge that is introduced to the students on the spot — with about one hour to complete. This year, they were given a number of small straws, a piece of string, a length of duct tape, and a rubber band, and told to build a bridge that would span 17 inches and hold a weight. The bridge that held the heaviest weight for three seconds was the winner.

“We had no time,” Mowrey said. “They told us what we were doing and we just had to start right then. You had to think up something as quick as you could.”

Warren students cleaned up on that event.

Alix Lytle and the team of Sky Kophazy and Walker took first in their divisions. Hecei took a second and Carlson and Hampson each brought home a third.

During the sixth-through-eighth grade spontaneous event conclusion, organizers said Kophazy and Walker had the “best innovation” of the day.

In addition to supporting the weight, part of the challenge was to keep the weight — any of three boxes that students added pennies to — balanced.

The Kophazy-Walker bridge was fairly narrow, but they had an extra building block in a good position to help. They put the rubber band on the bridge, but it had no structural value.

“We asked if we could use the rubber band to hold the weight in place,” Walker said.

When approved, they effectively tied the weight in place.

The event is a stepping stone. “It gave me more confidence in what I can do in technology and STEM,” Walker said. “I felt very proud of myself.” And she hopes to return.

At the awards banquet following the competition, organizers said there may be changes ahead for the event.

With only a handful of schools participating, and the number of students dropping each year, officials asked for suggestions from participants on ways to draw more schools and students to the event.

One sure change next year, after nine years, is that Mohney will not be earning any points for Warren.

The events are only open to students in sixth through 12th grades. But, when Mohney was in fourth grade and her older brothers were competing, she decided to try her hand in the spontaneous event, according to Advisor Craig King.

Her result was in the top three and the judges ruled that, since she was a student from a participating school, that result counted. Mohney earned Warren some points toward the Koehle Cup two years before she was eligible to compete.

She has competed every year since.

The Mohney era ended this year as she earned a third place in the Tug O’ War competition, second for her drawings, third for her presentation, and, appropriately, a first place in the spontaneous event.