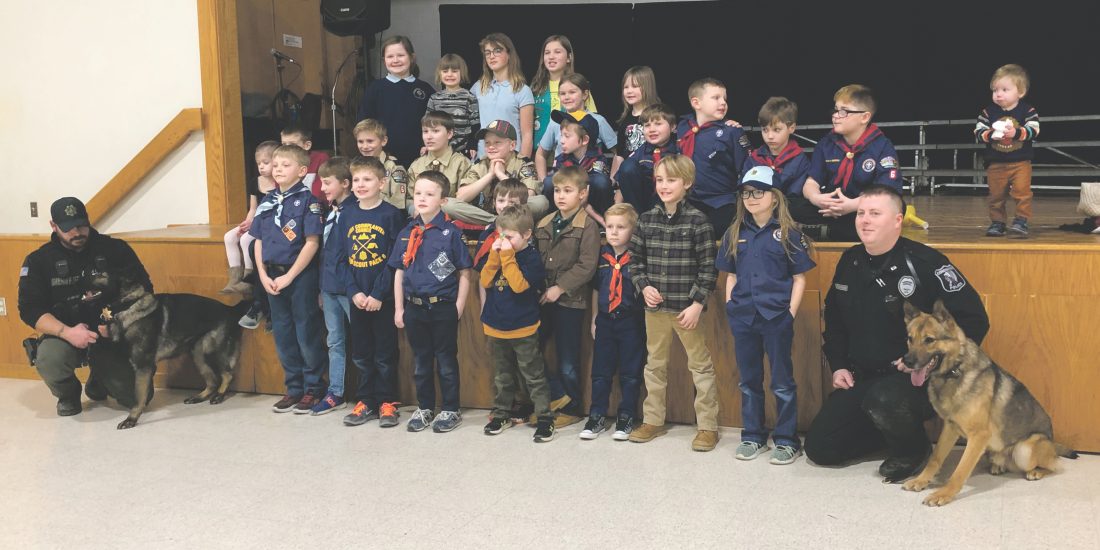 Warren County K-9 units made a visit to Pack 6 at their monthly meeting Wednesday evening.

K-9 officer Nic and K-9 officer Dina demonstrated their obedience skills and received some affection from the Pack before departing.

Both K-9s are originally from Slovakia. They began their training in Slovakia before flying to the United States where they were chosen by their human counterparts and trained with them for eight to twelve weeks before entering the field of justice together.

Officer Scott Neiswonger has been an officer for 14 years and is currently working with the Conewango Police Department. Nic is Officer Neiswonger’s second K-9, losing his first K-9 officer, Choper, to injuries sustained in a training incident. Nic is almost three years old and has served with Officer Neiswonger since Nov. 2018. 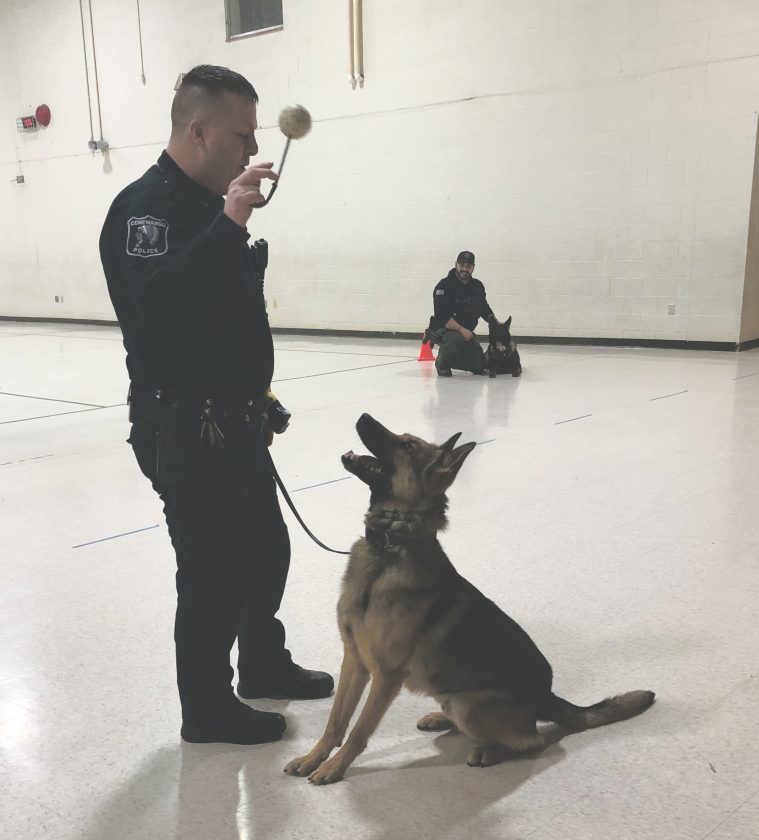 Each of the K-9 officers lives with their human partners.

“There is only one person they will respect and listen to,” said Officer Neiswonger. “Even though they’re the same commands, Dina will not listen to me and Nic won’t listen to Deputy Kibbey.”

The K-9s are trained using the Dutch language and will not respond to commands called in English. The dogs begin their training by learning obedience and commands.

“Just like people, they have good and bad days,” said Deputy Kibbey.

“When you say a command, they have to listen. Part of the certification is the dogs must be very obedient. If they don’t listen to you even once, it’s a fail,” said Officer Neiswonger.

All K-9 officers are trained to locate and apprehend criminals as well as smell for drugs and weapons.

“After they retire, they can get treats and steaks, but for now it’s dog food and Nic’s favorite toy, a ball,” said Officer Neiswonger.

Nic exercises for thirty to sixty minutes everyday, even on days off. It is mandated that the K-9s train for a minimum of sixteen hours every month. Some training they do is practice running through a line of officers while attempting to apprehend a criminal so they’re less likely to mistake a cop for a criminal in the heat of the moment.

“When a criminal is evading, you want to get the dog’s nose right to them,” said Officer Neiswonger.

Both human and K-9 officers keep themselves busy working the night shift and assisting fellow agencies around the County. Each officer’s vehicle has a cage in the back where the K-9 officers ride around helping patrol the County.

“They’ve got so much energy and exercise constantly, they’re like a child,” said Officer Neiswonger.

“So you’re looking at around $22,000 for each K-9. They cost a lot of money, but they do a lot for Warren County,” said Officer Neiswonger.

Although both Nic and Dina are German Shepherds, Officer Neiswonger has experience in training other breeds to be police dogs. He mentioned training labradors, dobermans and pitbulls.

Officer Neiswonger also shared that 95% of K-9 officers are males.

“Female dogs typically don’t have the testosterone and drive. If you do find a female dog, they’re usually really really good at their job. So Dina, she was the best out of ten or twelve dogs, she’s got the mindset,” said Officer Neiswonger.

Although Dina is the female, Nic is actually the smaller of the two. Dina weighs in at 84 pounds whereas Nic only hit 65 pounds. Both dogs are done growing height wise, although they could always gain or lose weight. According to Officer Neiswonger, German Shepherds are considered full grown by the time they are 2-years-old. Dina is 3 and Nic is 2.

“We’re very privileged to have two dogs, around here you’re lucky to have one,” said Officer Neiswonger. “We only had one here for four years, it’s helped out tremendously to have two.”

Those wishing to make a donation to the K-9 program can do so by donating to the Warren County Community Foundation and put a memo for the K-9 Fund.

At the end of the demonstration, the kids got a chance to show some affection to the K-9 officers and posed for a photograph with the officers.

Those wishing to book a K-9 demonstration can do so by getting in contact with one of the officers.

Anyone looking for information on joining a scout pack can do so by visiting the website, www.cccbsa.com, or the Facebook page.