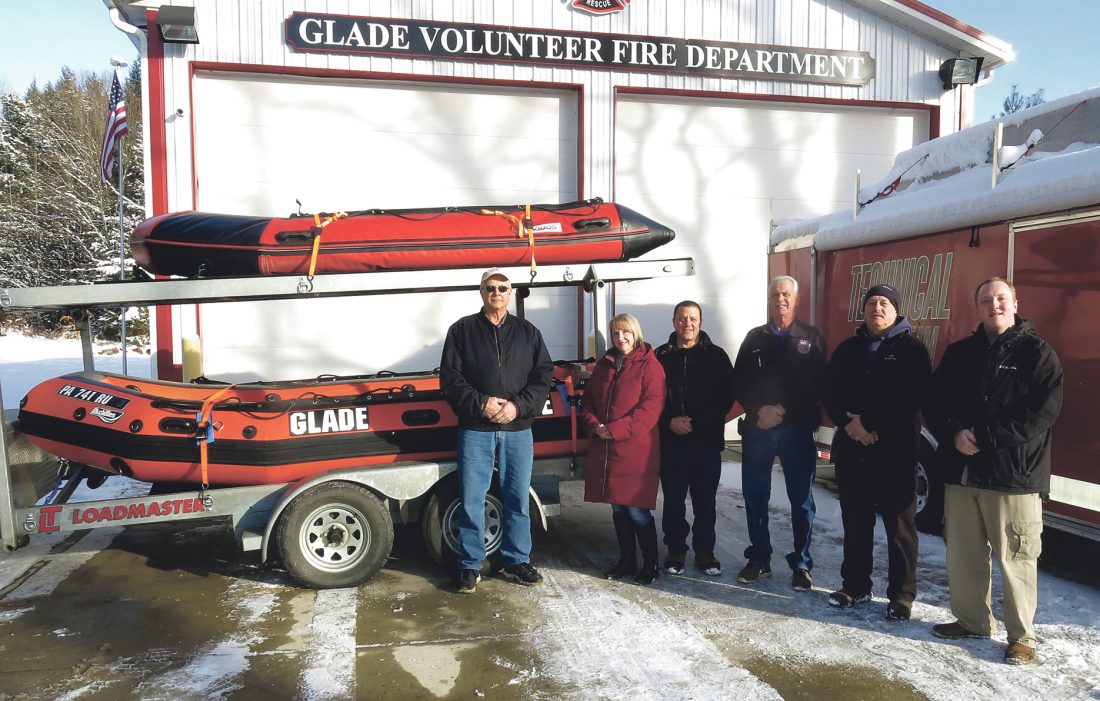 The Glade Volunteer Fire Department Water Rescue Team has been running a little short of a full complement.

Thanks to United Refining Company, the department has a new flagship — a 16-foot, rubber, inflatable Achilles rescue boat.

The Achilles joins the department’s fleet, bringing the number of watercraft to five — two aluminum boats and three inflatables. The department’s previous primary rescue boat was manufactured by Sillinger in 1984. That boat will remain in use as needed.

“We needed a second boat,” First Assistant Chief Doug McClain said. “Our plan for the past 15 years was to have a second.”

The Achilles may not have been acquired first, but it is not the department’s second. It is “one of the top rescue boats out there,” McClain said.

It will be fitted with a 60-horsepower engine, also donated by United.

And it will become a powerful rescue asset to Warren County and the region.

“We had trouble with the Sillinger,” boat operator Daryl Kittell said. “We started looking for ways to replace it.”

Glade has a mutual aid agreement with United and the two groups have worked together on river-related responses.

In talking with United Safety Director Tony Gigliotti, Kittell was steered to Human Resources Director Barb Kulinski and the possibility of a donation.

“We saw this as an opportunity to give back to the community,” Kulinski said. “It’ll be a great asset.”

“We donated money for the purchase of the boat and motor,” Gigliotti said.

It was not a purchase the department could have made on its own.

“They are responsible for the gift of the boat to the Glade Volunteer Fire Department,” Second Assistant Chief Dave English said.

The team now has the boats it needs. Anyone interested in joining the rescue team is encouraged to contact the department. “We’re always looking for new members of our water rescue team,” McClain said.