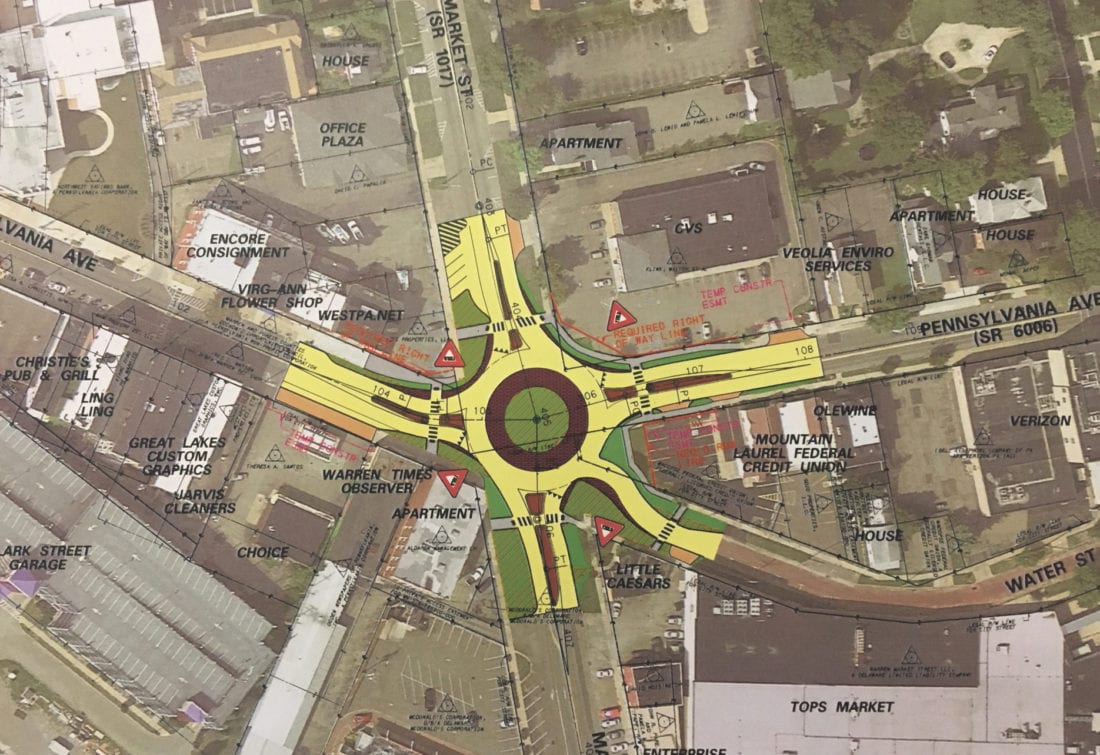 Times Observer file photo Since Warren City Council initially selected the roundabout option for intersection upgrades at Market St. and Pennsylvania Ave. over a year ago, new council members have said they would like to discuss rescinding or amending the motion that selected that option.

Round and round we go.

It’s been over a year since Warren City Council initially selected the roundabout option for intersection upgrades at Market St. and Pennsylvania Ave.

And the issue will be debated – again – next month.

Right at the end of council’s Monday meeting, new Councilman Christian Zavinski said he would like to give notice that at the next meeting – Feb. 17 – he wants to “revisit the issue of the roundabout” and “would like to discuss rescinding or amending the motion” that selected that option.

City staff indicated that the total PennDOT would expect in repayment for engineering and design costs if the plug was pulled in the project is in the area of $180,000 and climbing.

City Manager Nancy Freenock said after the meeting that Solicitor Andrea Stapleford reviewed the situation and said the item could be brought back before council if the action taken by council over a year ago has not resulted in actions by PennDOT that are deemed permanent. If it’s determined that the work already completed has crossed a proverbial point of no return, then council’s initial decision cannot be changed.

Cashman asked about his “reasoning for wanting to rescind this and pay a substantial penalty,” taking those funds to “throw in a ditch.”

New Councilman John Wortman highlighted the initial proposal from the city’s engineer that indicated an annual maintenance cost of $26,000 for the roundabout option, indicating the maintenance for new traffic lights was estimated at $8,000, arguing that the savings there over time would resolve the payback amount over a decade.

“It’s a guess,” Cashman responded. “That’s what they told me, not a yearly cost.”

City Engineer Chad Yurisic indicated that cost was based on maintenance that included the concrete truck apron, which PennDOT has since agreed to maintain.

“That’s a substantial chunk of concrete the city would not be responsible for,” he said.

Wortman and Zavinski raised the costs projected – between $150,000 and $200,000 – for the movement of a sewer main and manhole relocation and asked Yurisic to provide updated maintenance cost information.

Cashman noted that work would be covered by the sewer fund and Holtz said the pipes probably date to the 1940s but Wortman asked “Why replace it if it’s working?”

Holtz said it would have to be removed if the roundabout was installed.

The original traffic signal replacement option was cheaper than the roundabout and Councilman Paul Giannini questioned if PennDOT would “ding us if we save them money?”

“We will pay them back and (they will) pull this project,” Freenock told council. “There are other communities more willing to have work done” and that are “easier to work with. They acted in reliance on the vote taken by council.”

Freenock said she asked PennDOT what would happen if council changed its mind and said she was told the current lights would be re-timed and that PennDOT would pull the project.

Zavinski noted there are “other arguments” for revisiting the decision, as well. “I’m just talking money.”

“Something has to be done with that intersection,” Giannini noted while Councilman Phil Gilbert noted that if council overturns the roundabout “nothing would get done.”

“This is a major improvement project,” Freenock told the Times Observer after the meeting.

She said that the city asked PennDOT initially to examine the intersection for potential upgrades and said it’s still unclear how the $180,000 PennDOT has already expended would be repaid if council changes its mind.

“All of staff was against the roundabout,” she noted, but said that it is her position now that the city does not “have the luxury to go back and relitigate” the decision.

She emphasized that it is staff’s job to implement council’s decisions and said she is concerned about the city’s reputation should council change its mind, indicating she doesn’t want the city to pick up a reputation that would discourage state officials from working with the city on projects.

“I think that’s a real possibility.” she said.