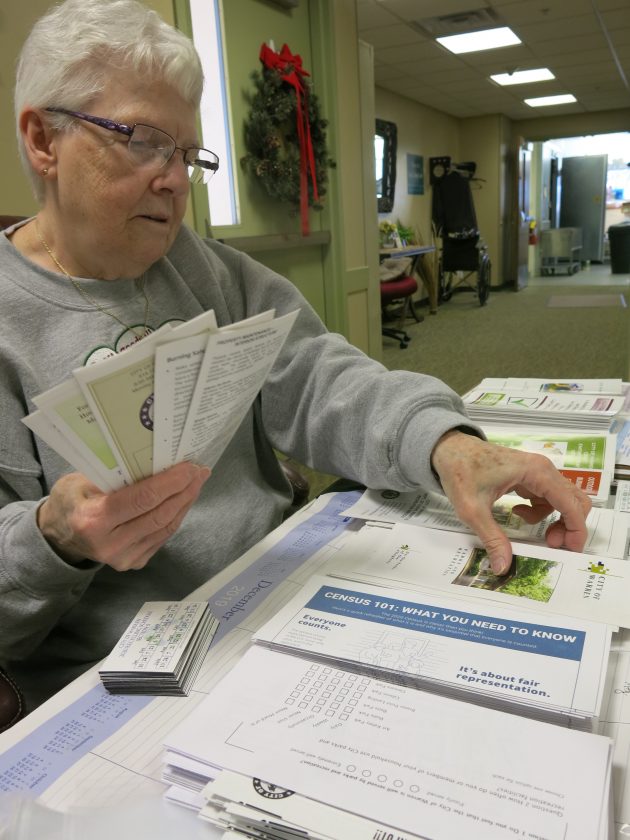 Times Observer photo by Brian Ferry Allegheny Community Center volunteer Karen Wingard stuffs packets of information about the City of Warren. The packets will be distributed throughout the city.

They’re not utilizing chimneys and the presents they’re leaving might not be on some people’s lists, but City of Warren workers are going house-to-house delivering packages this season.

The city’s annual recycling packets are being distributed now.

In each packet is a survey about parks and recreation, information about burning regulations, a pamphlet about property maintenance, a magnetic recycling schedule, a parks brochure, even information about the 2020 census.

Volunteers at the Allegheny Community Center have been helping city workers make sure all of the appropriate materials are in each packet.

The survey is a new item in the packets.

“The purpose of the survey is to collect residents’ input as to where they would like the city to make capital investments in parks and recreation,” Building Code Official Terry Williams said. “Part of the city’s Parks and Recreation Plan, which kicked off this summer, the survey is an opportunity for every resident to have their voice heard.”

City officials are hoping many residents will take the time to fill out the survey.

“We really want to hear what the residents think about current parks and what opportunities they would like to see offered in the future,” City Manager Nancy Freenock said. “It is important that we know what investments to make to ensure that we are meeting our residents’ needs. We included the survey in the recycling packets as a way to ensure that every resident has an opportunity to participate and are hoping for a high completion rate. It should only take about 10 minutes to complete.”

Residents are asked to complete and return the surveys by Tuesday, Dec. 31.

Completed surveys may be returned to the city municipal building — 318 W. Third Ave. Residents may also fill out the survey online at www.papersurvey.io/s/kz9iuq.

PennDOt to honor employees who died in the line of duty

The City of Warren Fire Department is on the cusp of having a safe aerial truck again. While the truck Warren City ...