Photo submitted to Times Observer Uber’s interface notifies riders with the name of the driver and a description of the vehicle they will be driving In Scott Lynds’ case, he arrived in a Honda Odyssey minivan like the one pictured above. Scott Lynds of Warren has been driving with Uber and Lyft since 2017.

Photo submitted to Times Observer Upon requesting a ride through the app’s interface, riders are introduced to their driver via a screen that shows their rating and reviews. 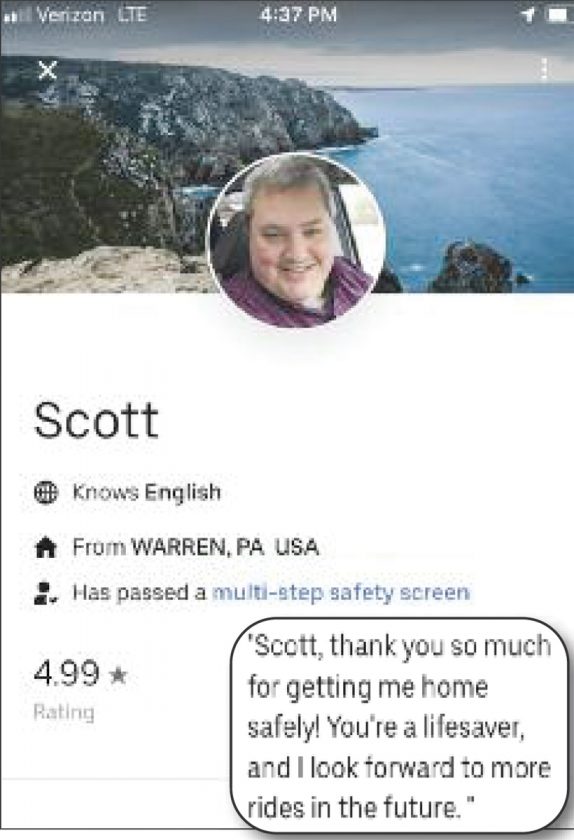 Photo submitted to Times Observer Upon requesting a ride through the app’s interface, riders are introduced to their driver via a screen that shows their rating and reviews.

Coming up in the “pre-internet” age, it was often difficult to comprehend what life was like 20-30 years prior, but in today’s modern world there has never been more truth to the sentiment.

For example, fifteen years ago, I found myself stranded alongside Rt. 6 in the middle of a blizzard a few miles outside of Corry. For those who have yet to experience this, well they haven’t really lived.

Traffic was heavy. There was no shortage of good samaritans stopping to lend a hand. But as small and light as that paper-weight Toyota Corolla seemed as it drifted off the road, there was no way it was coming out of that ditch without some serious assistance.

With no cell phone and no AAA, I had no choice but to hitch a ride into town with a helpful stranger. 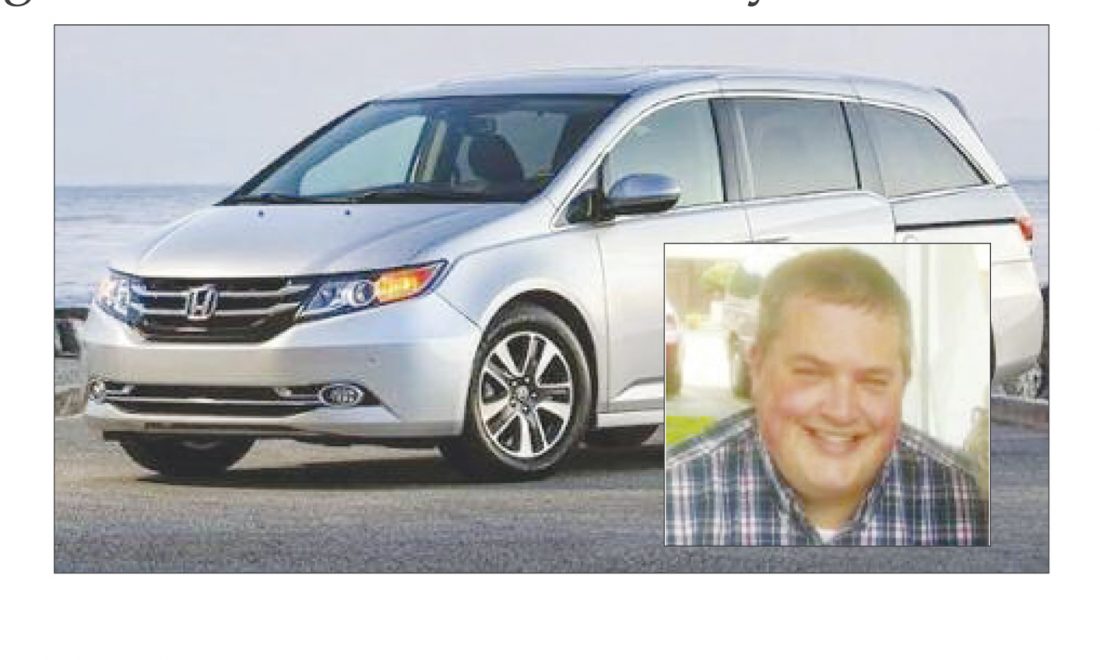 Photo submitted to Times Observer Uber’s interface notifies riders with the name of the driver and a description of the vehicle they will be driving In Scott Lynds’ case, he arrived in a Honda Odyssey minivan like the one pictured above. Scott Lynds of Warren has been driving with Uber and Lyft since 2017.

From a payphone (!), I called my dad at home in Lander who offered, dadly, to let me use his AAA membership to arrange a tow truck to fish out my car.

Our silver 2004 Subaru Outback has seen 15 years and 240,000 plus miles worth of adventures. Along with our Golden Retriever, Baxter, it has journeyed from Las Vegas and the Grand Canyon to New York City and Nova Scotia.

It’s endured many a brutal Northern New York winters and would often put newer vehicles to shame with its reliability. I began to see it as our very own Millennium Falcon, and with Baxter as a frequent co-pilot, I felt more than a little like Han Solo.

“She may not look like much, but she’s got it where it counts.”

That was until Saturday, Nov. 2 when it suddenly began to overheat and stalled.

After it cooled down, it started back up. I continued the drive to see if it happened again and when it did, I pulled it off the road at the Pittsfield Kwik Fill.

Pushing midnight, I soon learned that the gas station was closing. Thankfully, snow was still a week away, but there wasn’t a soul around. With only about 10 miles left to get home, I didn’t want to chance finishing the drive at night.

As I scrolled through Google on my phone searching for taxi services, it hit me, “Doesn’t Warren have Uber?”

I had signed up and downloaded the app last year, although I never used it. The only question remaining was, were there any active drivers nearby at that time of night?

Within seconds of requesting a ride, I got a message stating, “I have one stop to make before heading your way.”

The app introduced me to my driver, Scott, and his profile informed me that he had passed a multi-step safety screen, had a 4.99 star rating, provided excellent service, and great conversation.

It indicated that the vehicle I was to look out for would be a Honda Odyssey minivan. His profile was also accompanied with a photo, and I thought, “I know that guy. How do I know that guy?”

Wherever this unknown sense of familiarity came from, it certainly added a sense of comfort when the minivan arrived fifteen to twenty minutes later and I hopped into the passenger seat.

During the short ride to Pleasant Township, the conversation was indeed pleasant. As it neared 2 a.m., Scott clued me into his typical Saturday night clientele by telling me he was just about to call it a night before my request. Based on my location his instincts told him I was someone who needed help, according to Scott.

The next day, after a good night’s sleep, I hailed another ride to return to the car and once again, Scott arrived promptly.

By then I knew him as Scott Lynds, 1993 WAHS graduate and my next-door neighbor’s one-time high school boyfriend from when I lived in Lander.

Lynds began driving with Uber in 2017. His first foray on the app was during the May 2017 Mom Prom, a ladies-only Caring 4 Life charity event at the Men’s Club. Unfortunately, it didn’t amount to much.

“I was a little disillusioned,” he said. “But it wasn’t costing me anything, once you sign up, for my insurance it’s only an extra $10 a month. I decided to keep it, but I sort of laid low through the summer.”

It wouldn’t be until closer to Labor Day 2017 when things would pick up.

“I didn’t really attempt any rides until the following September.” Lynds said one day he “decided to turn on the app and give it a whirl.”

Lynds also offers his driving services through Lyft. Part of the deal with both services is that all of your vehicle information must be up to date.

“Uber and Lyft both keep track of my inspection, my license, my registration, and insurance.” he said. “Thirty days out I start getting emails and texts from them to remind me to update my records. Because if I don’t, by the time they expire, and it’s legit, right at midnight on the day, they shut you right off,” until all the records are updated.

While the multiple reminders can be annoying, it add incentive to stay current, especially if you want to keep driving.

“Warren is a very small market, and not very busy,” according to Lynds. “A few rides divided by too many people, it gets to the point where it’s almost not worth it.”

He structures his driving time to revolve around his full-time job in Falconer, and family time always comes first.

“The driving times that I pick, which are Friday night, Saturday day and night, and Sunday are pretty over-saturated I’d say.” he explained.

Only he and about a handful of other drivers are available during those times. But according to him, along with some friendly competition, most of the regular drivers get to know each other and often help each other out by cluing them in on unfamiliar territory, or the occasional tip for a potential fare.

“We all get along,” Lynds said. “I’ve become pretty good friends with Jim, another driver. We’ll just kind of compare notes, and if Jim says he’s going to log off at midnight, I’ll ask him if he has anybody ‘out.’ We don’t want anybody to take an Uber out to somewhere and not have a way back. We’re very conscientious about that. Just so I can keep an eye out for them and try to make sure I can get them where they need to be.”

According to him, a majority of the passengers he picks up are under 40, but depending on one’s tech savvy, he has developed a fair number of over 50 and some retirees as regulars.

“We know everybody by first name because that’s how it comes across on the app, but if I tell (Jim) I’m picking up Tom, he’ll generally know who I’m talking about. We have a lot of regulars that cover a spectrum”

It’s clear in the two years he’s been driving that Lynds and his fellow drivers have developed a sixth-sense intuition for his passengers. But that doesn’t make them any less unpredictable.

“I’ve really worked around things as best I could.” he recounts. “Not last year, but the year before I was taking my sons to the Big 30 game” that takes place in Bradford every year.

“I got a call in the afternoon telling me to go to Aldi’s,” in North Warren, he said. “I told my wife I would be back in a few minutes.”

“As I’m driving to Aldi’s the (prospective) rider called me.” Lynds said. “I could tell he had an accent but I wasn’t sure where it was from.”

Upon pulling into the Aldi’s parking lot Lynds discovered a family of 5 from Holland who had become stranded here.

“The father did most of the speaking,” he said as he sat up front with him and told their story.

“They came from Holland, had visited New York City for a little bit, then they decided to go see Niagara Falls.” he said.

After Niagara Falls, they headed toward the Allegheny National Forest and stopped at Aldi’s for picnic accouterments. When they came back out of the store, their brand new rental car wouldn’t start.

After calling the rental company, they hailed Scott via Uber.

“The closest rental car was in Erie.” Lynds said. “I thought, oh man,” understanding that the family didn’t realize how far Erie was.

“I called my wife real quick,” to ask if she cared if he drove to Erie. “I’ll still have time to get back to take the boys to the Big 30 game.”

After getting the greenlight from his wife, he loaded that family and all their groceries into the van and headed off to Erie. When they got there, the family discovered the rental company did not have a car that suited their needs.

“I didn’t feel right just ditching them,” so I waited with them. Fifteen or twenty minutes later “The father came out and he was disgusted.” Apparently the nearest appropriate rental was in Pittsburgh.

“They were begging me to drive them to Pittsburgh so they didn’t have to get another driver.” he said. “It would have been a great payday, but I had promised my sons we were going to go to the Big 30 game. I told them I didn’t want to. but I had to disappoint the family,” as opposed to his sons.

“They understood. And we did get to the Big 30 game on time.”