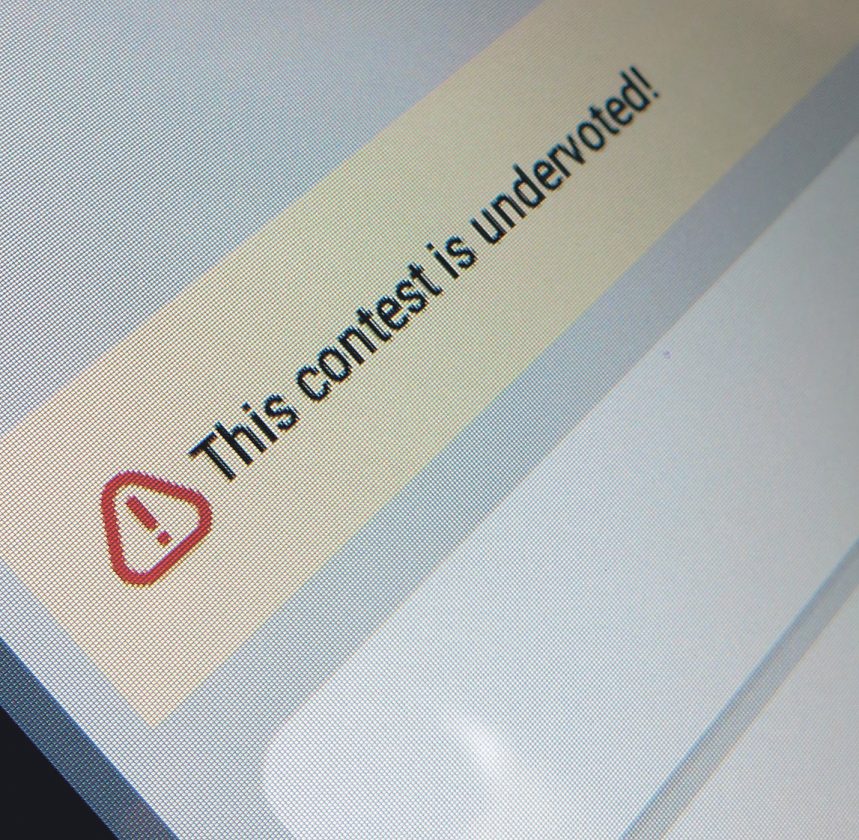 Times Observer photo by Brian Ferry Of the list of complaints leveled against officials who oversaw November’s election was that the new machines notified voters who undervoted, but did not notify them of overvoting.

Warren County has publicly responded to complaints about election procedures.

She said her purpose in lodging the complaint was to “not have these issues occur again. I believe they all had the effect of suppressing voting.”

Rivett agreed that the county should endeavor to avoid the problems that arose during the election. “The best we can do is to use what we learned during the election under investigation to improve the performance of poll workers, as well as voting equipment, in subsequent elections.”

Zaffino explained in the letter that the Pennsylvania Department of State advised she take up the issue with the president judge, district attorney, and the Board of Elections.

She said she did not believe the members of the board, as county employees, would be “able to be impartial in this matter. Their salaries and working conditions are greatly influenced… by the board of commissioners.”

In a typical election year, the county commissioners serve as the board of elections. However, when the commissioners’ positions are up for election, they must recuse themselves and a new board is appointed.

Rivett responded to each of Zaffino’s allegations, but she started her response by defending the character and actions of the appointed board members.

“Mr. Dan Glotz, Mr. Ed Burris, and Ms. Kim Exley are honest and highly respected in their respective positions…” she wrote. “All three… took their responsibilities… very seriously, and acted with both integrity and impartiality.”

1. that people were not notified that there would be new voting machines… for “a very important election”;

3. a lack of appropriate paper for the new equipment;

4. that the machines notified voters who undervoted, but did not notify them of overvoting;

5. a shortage of paper ballots;

7. delays caused by printers that broke down;

8. that some voting machines were not working when the polls opened;

9. that votes handwritten on copy paper were not counted;

10. that the website warrenvotes.org — which publicly displays the voting results for the county — is administered by Commissioner Jeff Eggleston, and that there were concerns about numbers that appeared thereon;

11. some write-in votes for Zaffino were not accepted due to problems with the first name, while multiple variants of another candidate’s name, including a nickname, were accepted; and

12. that groups of people helping Director of Elections Lisa Rivett on Election Night “have displayed a willingness to do other’s bidding” and were therefore suspect.

Rivett responded in writing to each of the concerns and Schmidt added “legal observation and factual background” regarding some of the items.

Those responses were addressed to District Attorney Rob Greene, Skerda, Zaffino, the board of elections, the commissioners office, Rivett, the Department of State, and the Times Observer.

Rivett did not dispute that the election did not go as well as she would have liked.

“I agree that the lines… and wait times… were extremely long at some precincts,” Rivett said. “We handled that as best we could. The length of wait times was not acceptable on a regular basis. That being said, every person that waited in line until it was their turn to vote was able to do so and had their vote properly adjudicated.”

According to a mandate from the U.S. Department of Homeland Security, each county must have a voting system that provides a paper ballot or record in place no later than the 2020 general election.

The Pennsylvania Department of State set a deadline of Dec. 31, 2019.

Warren County’s new system was in place for the past general election — meaning there was one trial run — albeit during a ‘live’ general election — before a primary election in a presidential year — when there is generally much higher voter turnout.

Zaffino said that most precincts “had their machine numbers cut in half.”

That “most” had half as many machines, was not accurate, Rivett said, but there were fewer machines in some precincts than there had been in previous year. “Due to the high cost to the county…” Rivett and Commissioner Jeff Eggleston recommended a lower total number of voting machines to the board of elections.

Paper was an issue at the polls. With unexpectedly high turn-out, the amount of paper provided with each printer and with poll workers was insufficient at some locations, Rivett said.

Schmidt said he and his assistant volunteered to help with the paper problem, purchasing copy paper locally, and driving to Bradford to collect paper of the recommended weight for the machines.

Rivett said rovers were sent out with paper as soon as she was notified that polling places were running low.

Zaffino said an “untrained person” was put in charge of a precinct when the judge of elections there was unavailable.

“No untrained poll workers have ever been placed in charge of polls during an election,” Rivett said. The elected majority inspector was given the oath and served as judge of elections.

Regarding undervoting, the machines allow voters to cast their ballots without entering votes in every race, but do put a warning up on the screen in those cases. They do not allow voters to overvote in any race.

“‘You have undervoted’ with a hazard sign comes up on the screen,” Zaffino said. “I wonder how many people cast additional votes to make the warning go away.”

“The lack of paper ballots at polling sites was a concern,” Zaffino said.

“As soon as a precinct communicated to the election office that they were running low… more were copied… and delivered to each precinct,” she said.

Rivett said no printers broke down, but some did run out of paper and had to be refilled.

She also said each precinct — including the one cited by Zaffino as not being opened promptly — called in prior to 7 a.m. to report that their machines were up and running.

Rivett said that there were paper ballots filled out at that precinct and that they were counted.

She said she personally posted the results to warrenvotes.com and the posted results match those generated by the ballot scanners.

Posting those results did take longer than usual. “By midnight on Election Night, we were unable to get warrenvotes.com completely updated,” Rivett said. “The scanning of all ballots… was completed by the afternoon of Wednesday, Nov. 6.”

“Write-in ballots with incorrect first names for me were not counted,” Zaffino said. “There were ballots for Carol, Cathy, Cindy Zaffino. I advised that I was the only Zaffino in all of Warren County running for office.”

She said that demonstrated ‘voter intent.’

She said votes for another write-in candidate, Charles Morrison, were approved if they were for Charlie, Charles, Chuck… and even PeeWee.

“Mr. Morrison communicated with the elections office prior to the election regarding different name variations, including ‘PeeWee,'” Rivett said. “Other write-in candidates also submitted name variations prior to running for office, in order that write-in votes… would be counted. Ms. Zaffino did not pre-report to me that she went by the names of Carol, Cathy, or Cindy.”

She said the board had to consider that Commissioner Cindy Morrison, who was also not on the ballot, received numerous write-in votes and that a vote for Cindy Zaffino could have been intended for either.

Schmidt said there are proper channels Zaffino could have gone through if she wished to challenge the decisions of the board. The deadlines for those challenges was long past when she sent the letter, he said.

“Even is Ms. Zaffino had been awarded every vote in her favor that required adjudication, her final count would still have been far less than what would have been required to have her declared the winner,” Schmidt said.

Zaffino did not state in her letter that it was her goal that the election results be overturned or that she be installed as a commissioner.