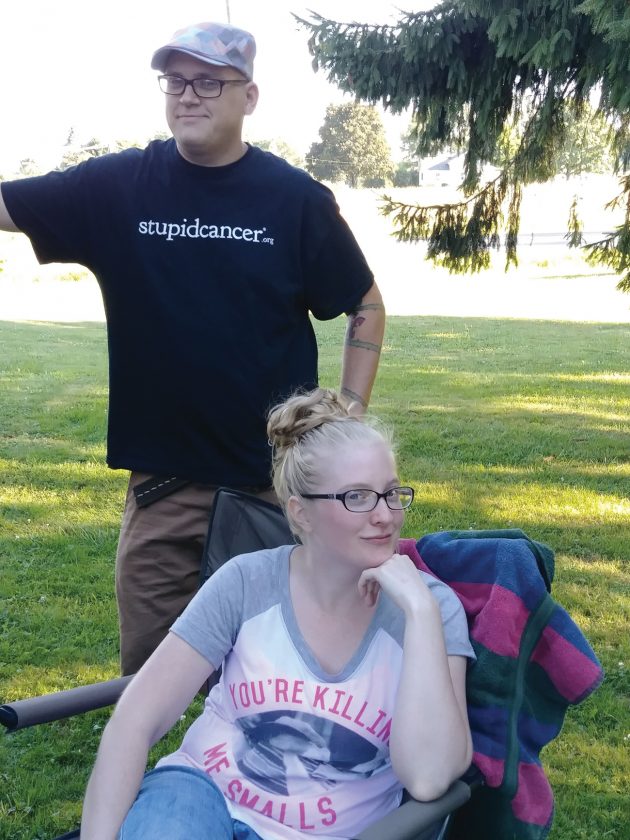 At the time, he thought it might have been appendicitis. However, by the end of the day, he found himself at Shadyside UPMC in Pittsburgh. The diagnosis: acute myeloid leukemia.

For the next nine months, the Warren County resident was in and out of the Pittsburgh hospital undergoing numerous rounds of chemotherapy, testing, and other treatments. Finally, as Christmas of 2018 approached, he was declared to be in remission. He came home to begin recuperating, and by summer, life was beginning to stabilize.

Then on July 30 of this year, the family got the call they had all hoped would never come — Campbell’s bloodwork showed that the leukemia had returned. The medical professionals determined his best option was a stem cell transplant after one to two rounds of chemotherapy.

About this same time, Campbell’s wife, Stacey, began to have some health issues of her own. Within two weeks of Campbell’s relapse, Stacey learned she too had cancer. She was diagnosed with metastatic choriocarcinoma, a rare cancer, but one that usually responds well to treatment. Ever the optimist, Stacey Campbell created a logo and hashtag: Team Campbell #cancerbuddies.

On Nov. 12, Campbell had his stem cell transplant at Shadyside UPMC in Pittsburgh. His brother Bryan was his donor. He will continue to live in Pittsburgh until early February with trips to the hospital a few times each week.

Meanwhile, Stacey Campbell continues to get her chemotherapy in Warren. She travels to Pittsburgh as often as possible to be with her husband.

Stacey Campbell’s mother, Julie Mills, said she was “shocked” to learn of her daughter’s cancer diagnosis around the same time her son-in-law’s cancer returned.

“The response from the community has been overwhelming,” Mills said. “They have received a lot of support. Everyone has been great.”

The couple has two children, house payments, some uncovered medical expenses, and hefty travel expenses. Campbell receives disability, but it is not enough to meet all of their needs. Stacey Campbell is unable to work at the present time due to the chemo treatments.

In order to provide support and financial assistance to the couple, a benefit has been planned. The Jamestown (N.Y.) Christian and Missionary Alliance Church (the couple’s home church), the Busti (N.Y.) Church of God and many family and friends are hosting a pasta bar and basket giveaway on Sunday at the Busti Church of God from 12:30 to 4 p.m.

Those unable to attend but would like to help the Campbells can go to Gofundme.com/f/brandonsbattlewithleukemia.

Eric Tichy contributed to this story