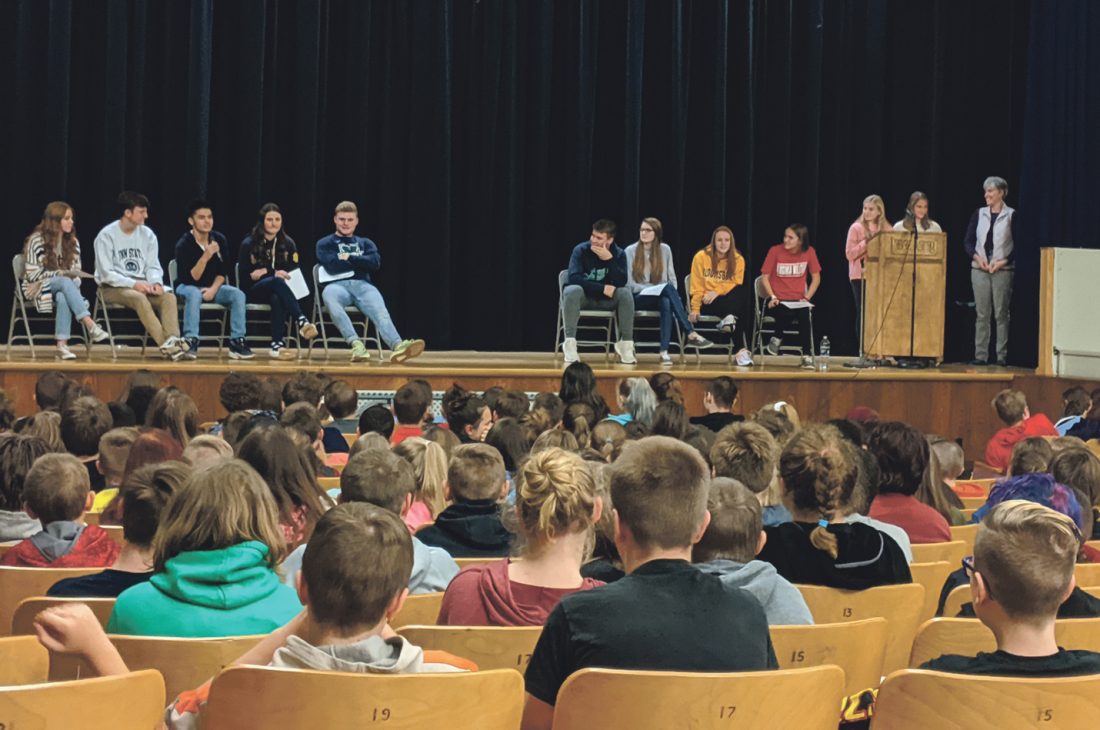 Times Observer photo by Lorri Drumm Nine members of the senior class at Warren Area High School took the hot seat as they fielded questions from students at Beaty Warren Middle School on Wednesday. Their mission was to offer advice as the prospective high-schoolers plan their futures.

The premise behind a slew of questions posed to Warren Area High School seniors on Wednesday seemed to be, “If you knew then what you know now, what would you do differently?”

The answers were often similar — don’t be afraid, study more, prioritize and expect to slip or trip in front of your peers at some point.

The first Senior Panel Discussion was held at Beaty Warren Middle School on Wednesday. Nine members of the WAHS senior class answered about an hour’s worth of questions posed by seventh and eighth graders.

Lori Hahn, history teacher and event organizer, told the middle school students that there will be changes when they go to the high school. “The seniors are here to answer your questions,” she said.

Hahn told them that going to the high school offers them a “clean slate.” “It’s a great opportunity to start fresh,” she said.

One of the questions posed to the panel of seniors asked how they changed since middle school. Naomi Hahn replied that she wanted to be a dentist when she was in eighth grade. “Now I’m going into the military,” she said. “Don’t pigeon-hole yourself.”

Several students said that they were shy in middle school but changed as they made their way through high school. “High school is a time to grow out of your shell,” Riley Bickling said.

Allison Koebley told a story of one of her first encounters with an upperclassman. It was her first day as a high school student. She was trying to get into her locker. An older student yelled at her “for trying to get into my own locker,” she said. “I was so scared. I wish someone would have told me, ‘don’t be scared, just get over it.'”

While the future high-schoolers conquer fear and anxiety, the group agreed that it’s equally important to take their classes seriously from the start and learn to balance activities and academics.

“Freshman grades matter,” Bickling said. “They go on your college transcript. They affect your GPA.”