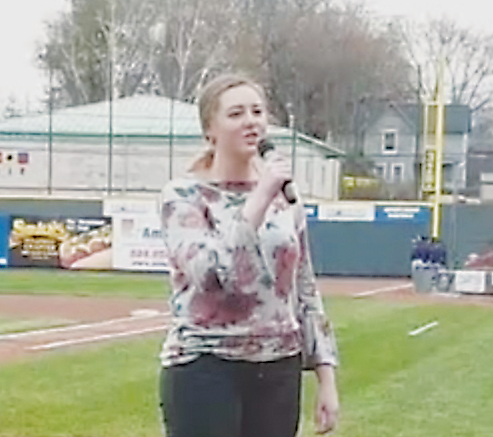 Warren County Dairy Princess Elizabeth Lucks is a woman of many talents and right now she needs your wows, likes and votes to sing the National Anthem at the Pennsylvania Farm Show in January 2020.

Entrants upload a video in the comments under the competition announcement on the Pa. Farm Show Facebook page. The top 14 entrants, based on total reactions (likes, wows, loves, etc.) will open each day of the Farm Show and Opening Ceremonies by signing the National Anthem.

Elizabeth was prompted to enter when a member of her Dairy Promotion Committee saw the Facebook post and immediately contacted her.

“I was right on it, my true passion is singing,” said Elizabeth.

She will already be attending the Farm Show as the Warren County Dairy Princess, so she thought why not throw in something else she loves and sing the National Anthem.

“It would mean a lot to me and I would be honored if I were to be one of the top entrants as I am very proud to be an American and very humbled and blessed to be able to sing.”

In high school, Elizabeth sang at several basketball games and wrestling matches. This past year she was selected to sing for one of the home opening games for the Sea Wolves.

She entered her first talent show in this past April in Youngsville, taking first place and also sang the National Anthem at this year’s tractor pull at the Warren County Fair.

“I think it is wonderful that there are two Warren County residents vying to win and since they are taking the top 14 winners by public voting, people can vote for both of us,” said Elizabeth.

The deadline to vote on videos is Monday, November 11 at noon.

There is no limit as to how many videos fans can vote for. Sharing the videos of entrants is highly encouraged to increase exposure and increase the chances of winning.

Remember, all reactions that will count towards the final voting tally must be on the original video, not on a shared post.