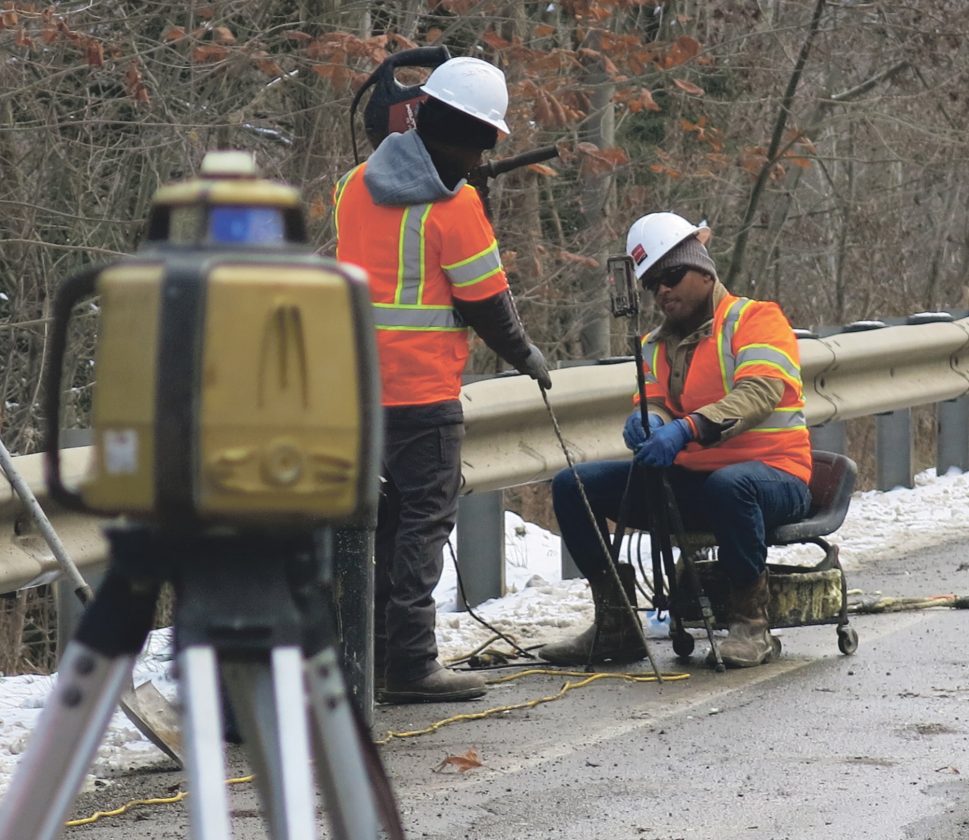 PennDOT has taken action to bolster a sinking section of Dorcon Road.

Instead of building a retaining wall or applying more pavement, PennDOT brought in a Houston-based company and tried a relatively new technique.

The Uretek USA team injected an expanding structural polyurethane into soft spaces beneath the road surface, according to Project Manager Dan Walizer.

“We’re going to stabilize and strengthen the foundation soils under the roadway,” Walizer said.

The company tested the density of the materials beneath the surface and discovered that the ideal depth for injection was four feet.

The polyurethane is a binary liquid — it is stored in two separate parts. When the two are mixed, a chemical reaction takes place and what was once a liquid with the viscosity of motor oil expands and hardens.

That process takes about 40 seconds.

The urethane can be seen expanding out of the hole once the gun that shoots it into the pipe is removed.

That material takes up space and compacts the material around — in this case above — it.

“It’s going to compact the soils and prevent settlement,” Walizer said. “Typically, we can lift this pavement and take this rut out of the roadway.”

The rut in the westbound lane is about two inches deep.

Using global position system elevations and lasers, the company tracked the changes to the pavement.

While the two-inch rut was still visible within minutes of the first injections, workers reported an upward change of five millimeters moments after finishing one injection.

There was no guarantee that the road would be lifted two inches. Preventing further degradation was the primary goal. “We can definitely prevent it from getting any deeper,” Walizer said.

The company is able to return to a job site and use the GPS data to follow-up, if the client is interested.

“It’s a different approach,” County Maintenance Manager Adam Elms said. The process was less expensive and less disruptive than the traditional construction of a retaining structure would have been.

Traffic was restricted to one lane and managed by flaggers.

Elms said the rut had grown 20 feet longer in the past year. The entire 90-foot section of road was finished Thursday, including using the polyurethane to seal the roadside ditch to prevent water from undercutting the road surface.

The expanding polyurethane project was the first of its kind for PennDOT’s District 1, Walizer said.

Uretek will continue lifting Warren County roads on Friday on a section of Route 59 above Kinzua Dam, Elms said.

If the work meets PennDOT’s expectations, Elms expects there to be more work available. “We’re looking to expand it,” he said.