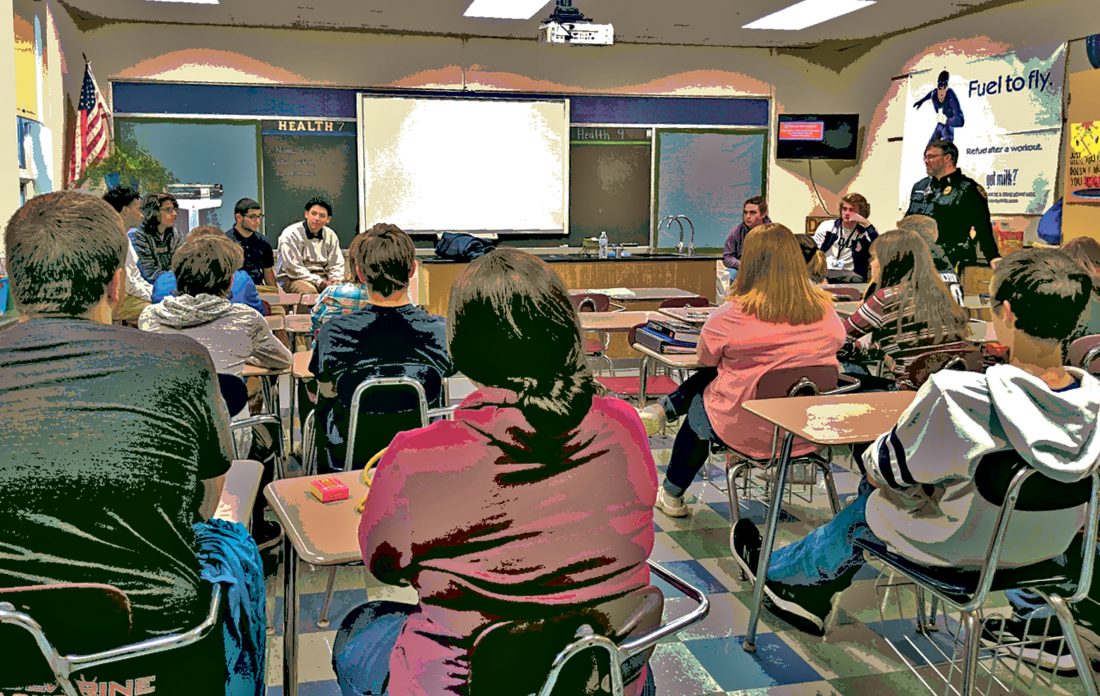 Times Observer photo by Lorri Drumm About a half dozen residents of the Abraxas 1 campus in Forest County spent the majority of a school day sharing their personal stories with students at Youngsville High School recently. Their message — don’t follow in their footsteps.

Most people probably wouldn’t expect life lessons to come from young people who have barely reached their teens.

Especially teens on a path that could have led to death.

About a half dozen residents of the Abraxas 1 campus in Forest County spent the school day recently sharing personal stories with students at Youngsville High School. They were accompanied by Youngsville Police Chief Todd Mineweaser. “They wanted to come talk to you,” Mineweaser told the students. “They’re here to educate you.”

Each of the young Abraxas residents had a unique story and background but there were some things they had in common. Mineweaser said they had all used drugs on a regular basis and, when he asked them if “getting arrested saved them,” most of them agreed it had.

One young man, who said he would “probably be dead if he hadn’t got caught,” told the students about the day that changed his life.

“I’ll never forget my first arrest,” he said. “It was Dec. 9, 2017. It was the first snowfall of the season.” He and his friends were in his room “tripping on acid.” His parents and sister were outside playing in the snow. He told the students that he “freaked out,” went outside and started walking down the middle of the highway. “I was screaming at cars and kicking,” he said. “The roads were horrible. Cars were swerving. Somebody could have gotten killed. I could have been killed.”

The young man said he hasn’t done psychedelic drugs in about 10 months, but he still has hallucinations. “Every day it’s like I’m still tripping,” he said.

When asked why he progressed from smoking marijuana to using psychedelic drugs, he replied that he “felt like he was never in control.”

“I was an addict even before I ever used drugs,” he said. “I felt like it was out of my control. It’s a disease. I was born an addict. I’ll die one.”

One 15-year-old male shared his experience of crime and personal loss. He started “smoking pot” at age nine. His 17-year-old cousin introduced him to it.

“I thought he was cool,” he explained as his reason for going along with the drug use.

The first time he was arrested happened when he had a physical altercation with his father. He ran away and, by age 13, he was selling drugs including marijuana and methamphetamine. By age 14, he was also selling guns.

“I met a guy who would give me anything, drugs, guns,” he said. “I was tryin’ to provide for myself.”

He also talked about an incident that happened when someone he was close to got robbed.

He described a scene where he was among seven people in a car who went to the apartment where an alleged thief was. “A bunch a stuff went down in that apartment,” he said.

He told the students he was arrested that night. “I got felonies and misdemeanors,” he said. “I was put in a 7-by-10 cell.”

Mineweaser explained some of the limitations the young man must now live with due to his arrest. “He can never buy a gun, go hunting, or be in the military,” he said. “He could never have my job.”

The young man has suffered personal tragedy due to drug use. His girlfriend was pregnant. He told the students he found out she was “using.” She suffered a miscarriage. “There’s nothin’ I love more than my girl and my family,” he said.

That love leads to frustration. “It’s hard not bein’ able to be there,” he said. But while he’s anxious to reunite with the people he loves, it doesn’t come without risk. “I gotta go back to the block. I got nowhere else to go,” he said. “People die every day where I live. There’s people who want me dead.”

The struggle to get good-paying jobs once they leave Abraxas adds to the possibility of returning to the same patterns, according to Mineweaser. “It’s hard to do the right thing,” he said. “But that fast cash ain’t worth it once you get caught,” one young man replied.

That same young man is anxious to get back to his life despite the statistics. “Don’t take life as a joke,” he told the students. “I miss huggin’ my mom and my sister. Now I gotta ask for everything I get.”

Abraxas 1 opened its doors in 1973. The facility has treated residents in the areas of substance use/abuse, socialization, education/vocation, family, delinquency, community awareness, and victim impact. Although rooted in substance abuse treatment, it continues to expand its services.