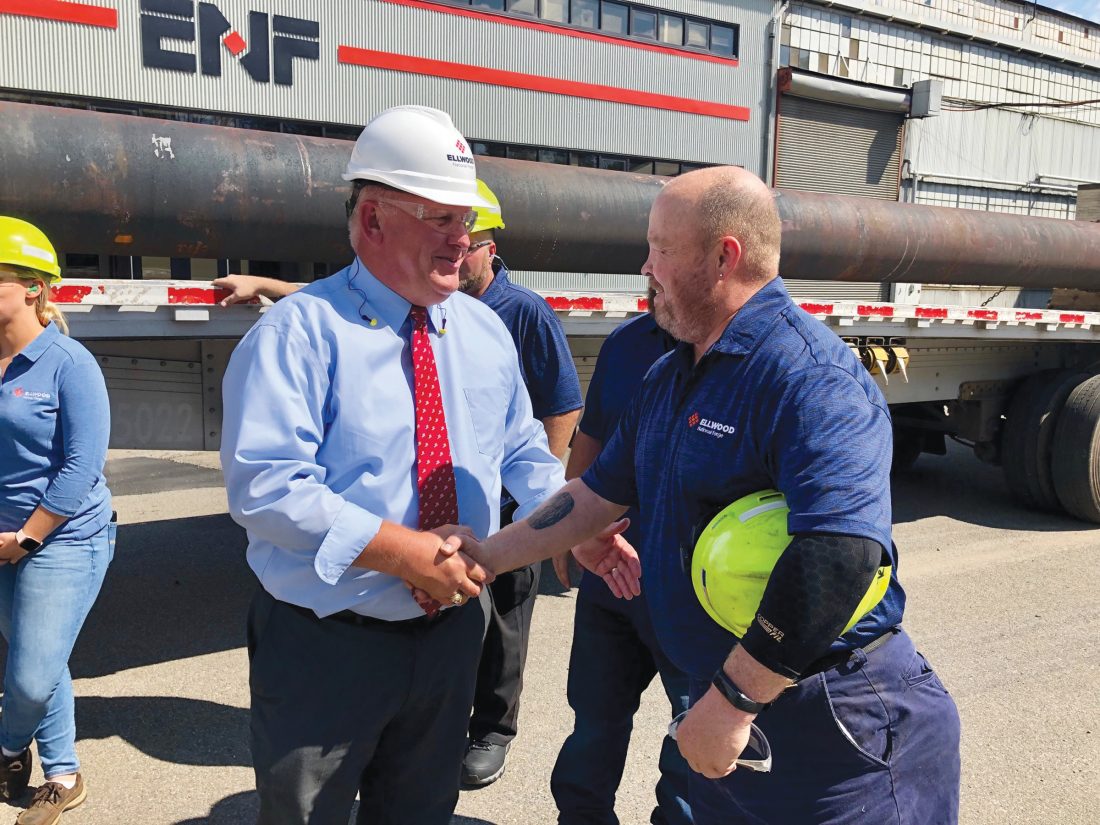 Times Observer file photo In this Times Observer file photo from Sept. 3, Congressman Glenn G.T. Thompson is seen shaking hands with an Ellwood employee during a his visit at the forge last month. Thompson has recently called upon Pennsylvania’s Republican delegation to implore Chairman Adam Schiff and House Democrats to provide increased transparency into what they fear may be a “sham impeachment” into President Donald Trump’s dealings with Ukraine.

Pennsylvania Republican members of the House of Representatives aren’t having it when it comes to House Chairman Adam Schiff and Speaker Pelosi and House Democrats’ “secret behind closed doors” impeachment inquiry.

In an effort to provide increased transparency into what Pennsylvania’s Republican delegation deems a “sham impeachment,” today, Congressman Glenn ‘GT’ Thompson, Dean of the Pennsylvania Republicans requested that the House Permanent Select Committee on Intelligence provide unrestricted access of Ambassador Kurt Volker’s testimony transcript to all members of Congress.

According to what has been reported so far about Volker’s testimony revolves around text messages he provided to House Democrats between himself, Ambassador Gordon Sondland and U.S. diplomat William Taylor.

Those texts, according to Democrats, suggest a link between U.S. military assistance to the Ukraine that was being held up over requests President Donald Trump had made to Ukrainian President Volodymyr Zelenskiy during a July 25 phone call to launch investigations into former Vice President Joe Biden, his son Hunter Biden and his connections to a Ukrainian gas company.

Texts from Taylor suggest the men were aware of the president’s political interests when he stated, “As I said on the phone, I think it’s crazy to withhold security assistance for help with a political campaign.”

Sondland replied by defending the president’s intentions, and stated the Trump administration’s oft-repeated line of “no quid pro quo’s of any kind.” Followed immediately by his suggestion that they, “stop the back and forth by text.”

According to House Democrats, no further proof is needed that the Trump administration was attempting to leverage foreign aid in exchange for Ukraine’s assistance in bringing down a political adversary, which is the beating heart of the House Democrats’ impeachment inquiry into President Donald Trump.

But according to U.S. Rep. Jim Jordan, R-Ohio, and the other Republican lawmakers who were present at Volker’s closed-door testimony before three House committees on Oct. 3, Volker’s answers disproved any allegations of a “quid pro quo” in the Trump impeachment inquiry.

“I hope every American gets a chance to read what took place in that room today — because when they do, they will see there’s no ‘quid pro quo,'” Jordan said on ‘Hannity.’ “They will see exactly what President Trump and [Ukraine] President [Volodymyr] Zelensky, was going on between these two countries.”

Jordan’s assertion raised concerns among other House Republicans that they weren’t being given the full extent of the House Committee’s interviews and the testimonies provided by U.S. diplomats.

It was precisely these concerns that led Congressman Thompson to draft a letter dated Tuesday, Oct. 22 to Chairman Adam Schiff requesting full, unrestricted access to the interview transcript of Ambassador Kurt Volker.

The entirety of the Pennsylvania Republican delegation joined Thompson in this request.

“Speaker Pelosi and House Democrats’ decision to withhold impeachment inquiry information from Republican Members of Congress should trouble all Americans,” said Congressman Reschenthaler, “My colleagues across the aisle have thrown transparency and fairness out the window as they conduct their sham impeachment in secret behind closed doors. Conducting an inquiry in secret and leaking select, cherry-picked materials proves this is a politically motivated inquiry. The American people elected their Congressional representatives-both Republicans and Democrats-to be their voices in Washington. They are ignoring the will of the Americans who don’t share their political views by denying Republican members the opportunity to view impeachment documents.”

“This ‘impeachment inquiry’ is a sham process without any transparency and lacking basic due process. The American public deserves to review the facts and weigh the evidence,” said Congressman Keller. “Instead, their elected representatives are being denied access to vital information while Democrats selectively leak testimony intended to drive their impeachment narrative. It’s time for House Democrats to open the hearings, release the transcripts, and provide the transparency needed for this solemn and serious procedure.”

“The secrecy in which Chairman Adam Schiff has shrouded this process is breathtakingly unethical and un-American,” Congressman Perry. “We don’t have secret trials, secret courts or secret impeachment proceedings in this Country, nor do we permit only one side to have attorneys, call witnesses and present information. Why is not every Member of Congress allowed access to this material? I join my colleagues in Pennsylvania to demand the immediate release of all documents, transcribed interviews, and information related to this inquiry. The American People must be allowed to evaluate this material and make educated and informed decisions for themselves.”

They closed the letter to the House Permanent Select Committee on Intelligence by saying that it was important for all members of the House of Representatives to understand the facts with respect to Ambassador Volker’s testimony before the Committee.