Officials plan ahead for Courthouse projects 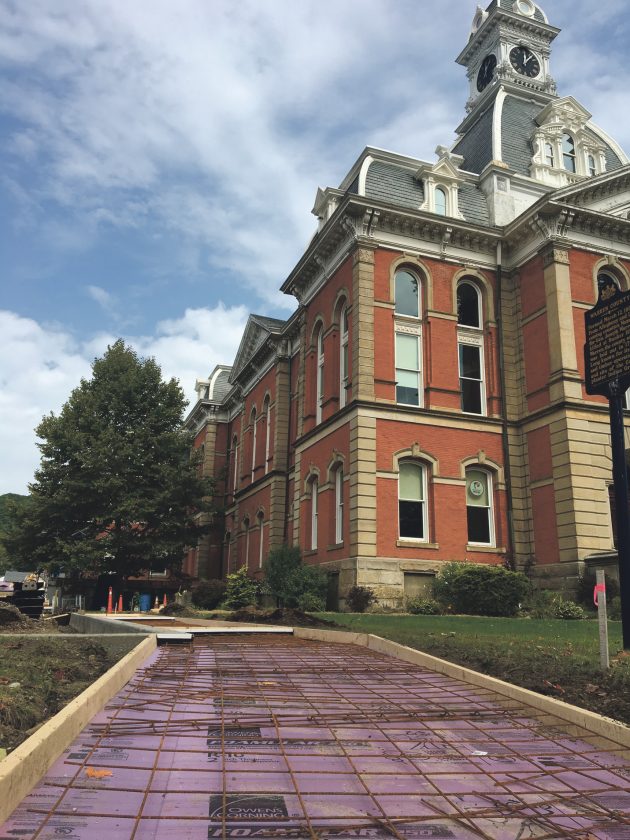 Times Observer photo by Josh Cotton Sidewalk work up the west side of the Warren County Courthouse is underway.

From the roof to the sidewalks and a host of items in between, the courthouse – a National Register of Historic Places site – has most certainly been under construction this summer

And county officials continue to coordinate those projects moving forward in addition to following up on what has already been completed.

Commissioner Jeff Eggleston said that the sidewalk and parking lot contractors met with county staff last week and discussed “stuff that’s come up as part of the sidewalk project that will affect the (courthouse lot) paving project.”

He said they came to the conclusion that there is “no way (we are) going to pave” the lot by “the end of this year.”

Eggleston noted that the sidewalk contractor, Swanson & Son, is “doing a fantastic job on the sidewalk” and is “going to tear through that job pretty quick.”

He said that setting the sidewalk will result in having to “cut the pavement out a few feet.”

While the plan was to “patch different parts of the parking lot and do it in sections, try to take care of the worse areas,” Eggleston said, “because of the way the sidewalk is being built,” they have settled on completely re-paving the lot.

Eggleston said the paving contractor, Huber Blacktop, will set up the project to be “the first thing we’re going to do in the spring of next year.”

The commissioners will have to approve a couple of change orders to accommodate the change to the spring but Eggleston noted it is essentially “shifting cost from one job to another.”

While the sidewalk is currently in process, the Durable Slate Company, which completed roof repairs, will be coming to next week’s work session – at noon in the commissioner’s conference room at the courthouse, open to the public – to deliver a presentation on the work completed.

Eggleston said that would include before and after pictures as well as a time for them to “explain everything that was done” and answer questions before conducting a walkaround of the building at 5 p.m. to “point out all the different work.

“(I) think that’s a really good close to the project which has come in under budget, on time and everybody has been thoroughly pleased by it,” he said.

In addition to the paving, another element of the overall renovation will be delayed.

That means an order for roof-top HVAC units for the jail and courthouse are delayed and he said the county is “not going to get them in until mid-November.”