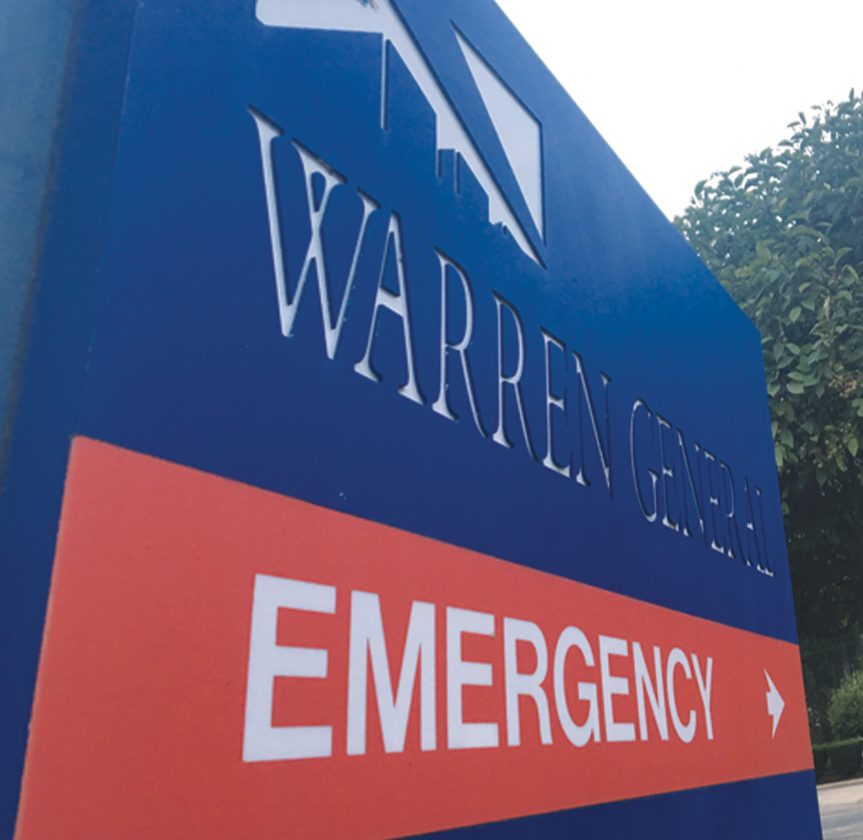 Times Observer photo by Dave Ferry Warren County’s Emergency Services were the focus of Monday’s commissioner work session. Some of the ideas discussed included a task force designed to put the “best minds” together to come up with cohesive solutions that will “support and augment” the county’s current EMS plan.

In 2018, there were about 2,200 calls for emergency medical services in Warren County.

And according to Warren County Commissioner Ben Kafferlin, “only about half of them were answered on time.”

An additional one-fourth were answered after 10 minutes.

Those “were not answered at all by the primary dispatch agency,” according to Kafferlin.

Kafferlin said that discussions at recent town hall meetings have revealed a theme of “concern” regarding “the future of emergency medical services in the county.”

He noted that City of Warren crews are responding to “calls outside of the city (and) not being fully compensated” and that the outlying areas have challenges with the “number of volunteers” and “call times that are increasing.”

“This is not new,” he asserted, noting McCorrison and Pascuzzi have been “raising the alarm bell for several years.

“One of the things Paul (Pascuzzi) and I talked about (is) having a task force set up specifically for EMS,” Kafferlin added. “This is not to trump or take away anything from the agencies” involved in EMS service.”

He said the goal would be to “augment everything that they are doing” and “collaboratively put it into one single document.”

“Warren County has always stepped up to a lot of challenges,” Paszucci said, citing the county’s involvement in the computer-aided dispatch and radio systems. “Now it’s time for the county to hopefully put that kind of energy behind the response of EMS across the county.”

He acknowledged though that volunteers at this point are “unable to meet the needs of the community” and “are relying on those that get paid, a model that up until now works fine.”

“Everyone has an opinion. Nothing can go forward unless we have some consensus on what we should be focusing our effort and energy on from a county perspective.”

He said he does not see individual departments and municipal officials solving these challenges on their own.

“(We) need to bring all the stakeholders together in some fashion,” he said. “We need to put together something that everyone can agree to that provides a rapid responses of EMS to the citizens of Warren County.”

He said he views this effort as “something to support and augment” the county’s EMS plan, which says that departments who are out of service are to call out of service and reach out to their neighbors for coverage.

“We find that 10 percent of the time that works,” Pascuzzi said. “(That) puts a significant amount of stress on the system…. People have an expectation that when they call 911 and need an ambulance it is coming and we need to solve that.”

McCorrison said he agreed with what Pascuzzi said and added that “it’s almost creating places to make mistakes within our system if the plan is not followed. When an agency is not able to cover calls, (they) designate another agency to cover calls. (There are) very few agencies that do that on a regular basis.”

Hoffman said that the concern for the city is not just financial but rather lost fire and ambulance capacity when city crews respond to calls outside the city. He said responding outside the city detracts from the protection that city residents are paying for.

“(There is) more to it than just a tax dollar tangible asset,” he said.

Freenock noted that “volunteers provide a valuable service to the community” and “have come in and helped on numerous fires we have had. We would do the same.”

She explained, though, that the city “can’t continue to maintain those costs” of the force size that is contractually bargained. “Our budget for fire is the largest segment.”

She noted the city hasn’t raised taxes for several years and said she finds it “unconscionable” to go to the residents of the city for a tax increase when the city is responding to calls outside of the city.”

Freenock went through some of the recommendations made by the state’s Early Intervention Program, which included taking an ambulance out of service, changes to subscription services and noted that another was “just not to respond to calls.”

“I don’t think any of those options particularly strike me as viable,” Kafferlin said.

“This is not a Warren County issue,” Hoffman noted, adding that it’s a state and national issue, as well.

Pascuzzi credited the work of the volunteers and said he wouldn’t want to diminish their service.

“This is a real puzzle,” Pascuzzi said, cautioning though that if the county waits for other or the state to solve it “God help us.”

Kafferlin said he met last week with the city, Pascuzzi and McCorrison and said they decided to explore the option of technical assistance from the state as well as municipal assistance program grant funds.

Pascuzzi said the county probably isn’t the first county to seek assistance in this area.

Kafferlin reiterated that the task force idea is “not meant to diminish any agency” but would pull the “best minds” together to create a cohesive document. He sees it as the county stepping into a “void and pull ideas together.”

“I don’t think we can solve this with volunteers alone,” Commissioner Jeff Eggleston said, suggesting “some kind of paid solution.”

He cited declining population as a challenge and said that it is “probably never going to be the way it was in 1972 again.”

“We can’t do half measures anymore.”

Kafferlin suggested that “regionalization doesn’t have to be a bad word,” explaining that it could include reforms such as cross-deputization.

He said it could be “Just working together more effectively.”

Pascuzzi said that some municipal officials are looking for someone to put a solution together.

“We need to think about this and be bolder,” Eggleston said, suggesting that no one would be opposed to paying higher taxes for timelier EMS response and put it through the lens of how long anyone would want their family to wait when an EMS response is needed.

“What we’re looking for is boots on the ground,” Pascuzzi said, to “get a response where (residents) expect us to be.”