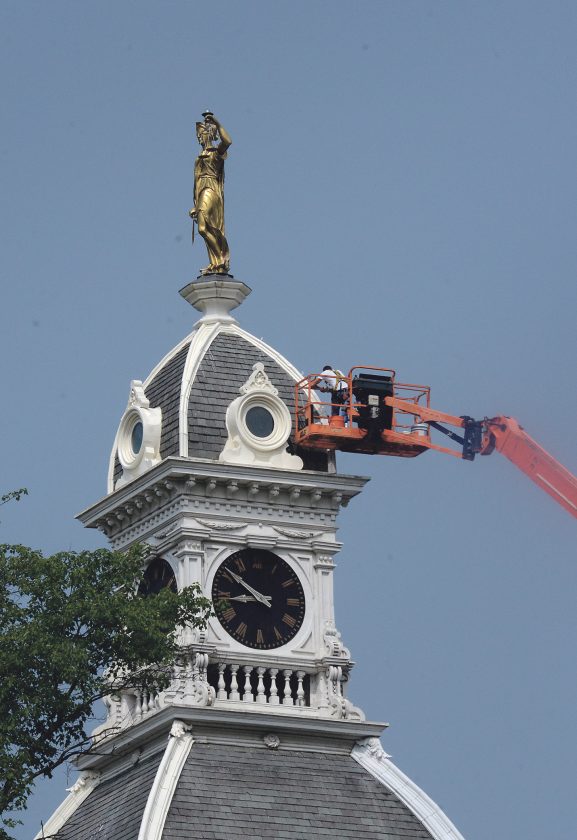 Lady Justice’s perch above the Warren County is looking better.

Earlier this year, the Warren County Commissioners approved a roof repair project for the courthouse.

The primary contractors, Durable Slate Company and McCreary Roofing, are ahead of schedule and within budget, according to the county commissioners.

“We are very pleased with the progress on the roof,” Commissioner Ben Kafferlin said. “Durable Slate has done a great job of restoring our historic courthouse and cleaning up some rough edges and making it look new again.”

“We’re fortunate to have two very professional firms that know what they’re doing working on this project,” Commissioner Jeff Eggleston said. “The work has been exceptional and they’re doing things right, so they won’t need to be redone any time soon.”

McCreary was in charge of repairing the metal portions on the top of the courthouse roof as well as replacing the rubber membrane on the 1925 addition, Eggleston said. “The coating applied to the roof will seal it and keep it watertight for the next couple of decades.”

Durable Slate was charged with repairing the slate portions of the roof and the seams around the slate, Eggleston said. The company has also done the bulk of the painting and cosmetic repairs.

“Every effort has been made to maintain the aesthetics of the building as well as ensure the long-term integrity of the roof,” he said. “According to a recent project update meeting, the entire roof repair project is projected to be done sometime in mid-August, ahead of schedule.”