Buddy the Dinosaur comes to the Warren Public Library 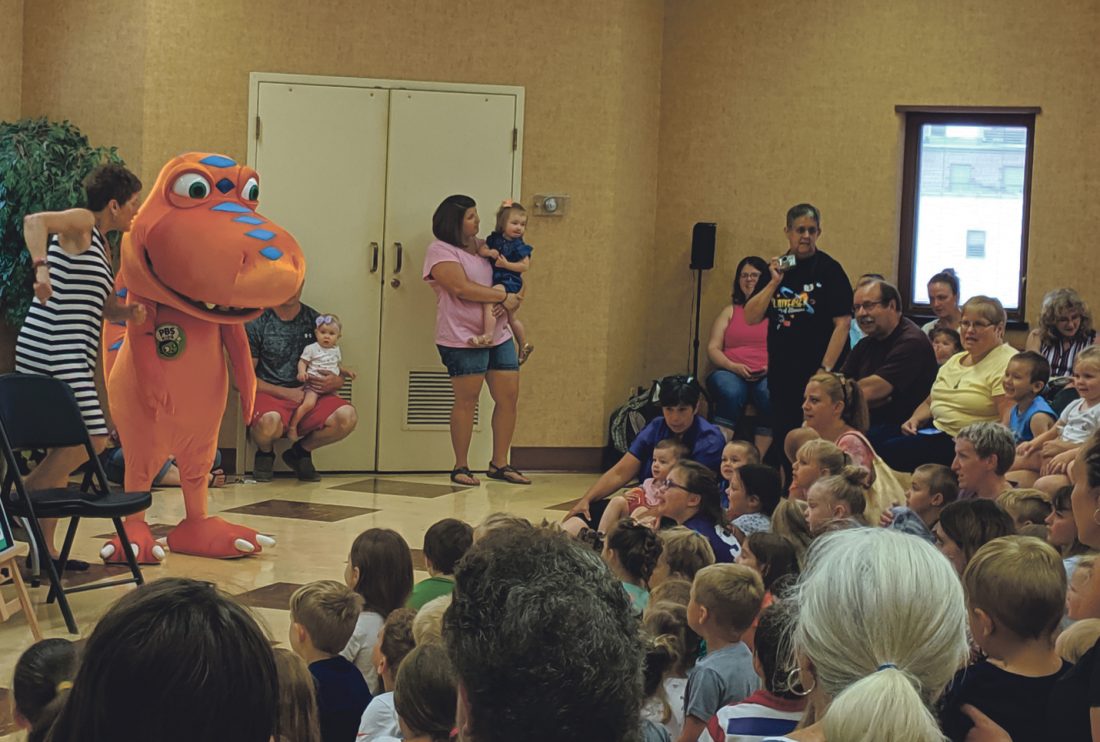 Times Observer photo by Lorri Drumm Buddy from PBS KIDS’ Dinosaur Train made a stop at the Warren Public Library on Thursday. Tons of his youngest fans came to visit with one of their favorite television characters.

It was standing room only, even with many in attendance choosing to sit on the floor, at the Warren Public Library on Thursday. Most of the very young crowd eagerly awaited one of their favorite celebrities — Buddy.

Buddy from PBS KIDS’ Dinosaur Train has been on the road with WPSU, public media for central Pa., this summer visiting libraries across the coverage area. Buddy hopped off the Dinosaur Train in Warren on Thursday to visit with some of his biggest fans.

Prior to his arrival, Susan Slater, librarian, read a book to the crowd. As she held up pictures of each of Buddy’s siblings the children immediately shouted out the names, “Tiny, Shiny and Don.”

Slater asked those in attendance how many watch Dinosaur Train. A vast majority of young hands went up.

Shortly after Buddy’s arrival, the crowd joined in a rendition of a song that changed the lyrics a bit to fit Buddy’s membership in a Pteranodon family.

Not long after Buddy made his way to the front of the room, a line formed to have pictures taken with the popular character. Those in attendance also received a free PBS KIDS book.

Dinosaur Train is a children’s animated series created by Craig Bartlett, who also created Hey Arnold and Ready Jet Go. The series features a curious young Tyrannosaurus rex named Buddy who, together with his adopted Pteranodon family, takes the Dinosaur Train to explore his time period, and have adventures with all kinds of dinosaurs.

Buddy’s adventures are sparked by his curiosity about his heritage. Buddy was adopted by Mr. and Mrs. Pteranodon. Buddy learned that he is a Tyrannosaurus during his travels on the train. As an adopted kid in a mixed-species family, Buddy is curious about the differences between species and vows to learn about all the dinosaurs he can by riding the Dinosaur Train. The dinosaur species featured in the show are actual dinosaurs discovered by paleontologists.

The show is set in a prehistoric world of jungles, swamps, active volcanoes and oceans, filled with dinosaur and other animal life, and connected by a train line known as the Dinosaur Train. The train can be customized for dinosaurs of all kinds: windows accommodate the long-necked sauropods, there’s extra headroom in the Observation Car for the larger theropods, and the Aquacar is an aquarium for water-loving species.

The train itself is run by Troodons, known as the smartest dinosaurs in this fictional universe. The Dinosaur Train circles the world with stops to visit undersea prehistoric animals. It can travel through the entire Mesozoic Era, the “Age of Dinosaurs”, passing through magical time tunnels to the Triassic, Jurassic, and Cretaceous time periods.

While some programs at the library are self-funded, Thursday’s event was made possible through local donations, according to Slater. It was sponsored by the Sokolski Family Fund and the Northern Pennsylvania Regional College.