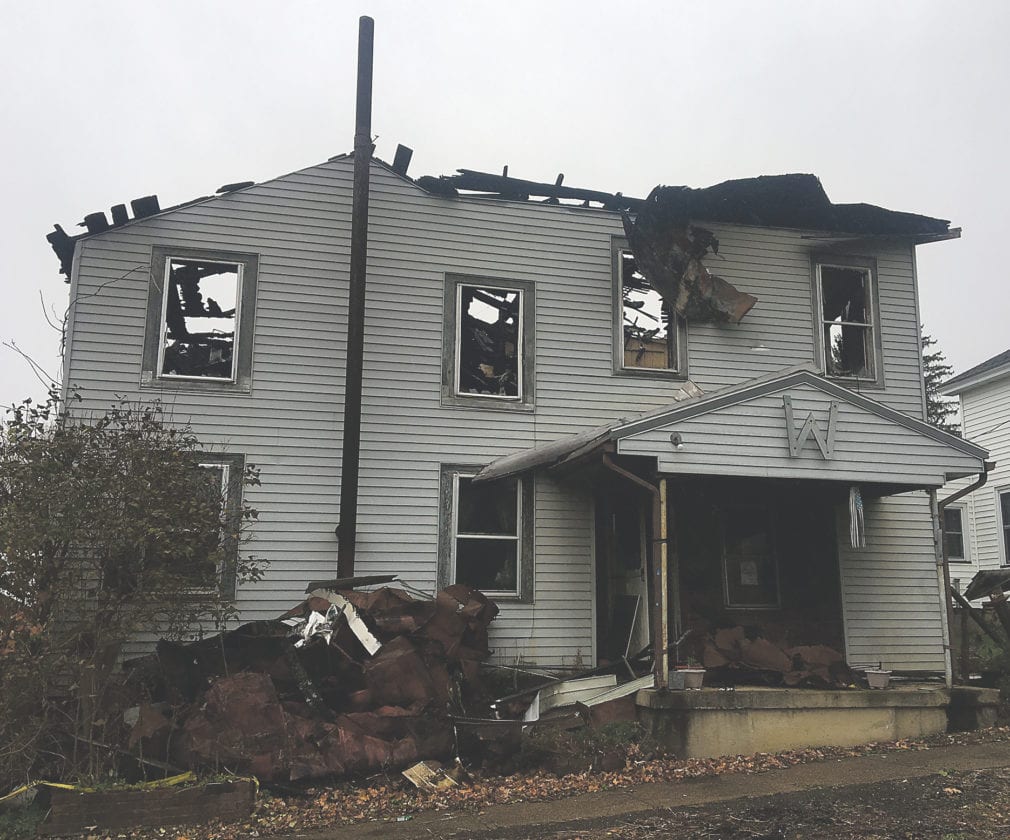 Times Observer file photo This burned-out structure on Economy St. in Tidioute Borough kicked off the discussion during the RDA meeting on Wednesday. The property has been in the RDA’s crosshairs for a while.

No one argues that Warren County doesn’t have a blight problem.

How the Warren County Redevelopment Authority is going to handle it is proving to be a much taller task.

The RDA on Wednesday discussed several properties on their list but spent the vast majority of the meeting talking about options it does – and, in some cases, doesn’t – have.

The property that kicked off the discussion has been in the RDA’s crosshairs for a while – the burned-out structure on Economy St. in Tidioute Borough.

Commissioner Jeff Eggleston said that property is “at the top of the list of demolition” for the RDA.

He said he had a conversation with a municipal official in Deerfield Township who was interested in collaborating on that demolition. Eggleston said the township is looking to remove “massive stones” from Althom Road and will need an excavator.

He said the township initially sought a ground which the county “isn’t in the habit” of doing but discussed the possibility of sharing the excavator rental as a means of reducing overall costs.

Eggleston then updated the authority on an initiative he’s undertaken to work with the City of Warren to develop a knock-down crew. He said city staff are working on a proposal to collaborate with the RDA.

“The goal here is to come up with a process we can use to demolish (properties) every year.”

Chief Clerk Pam Matve, who chaired the meeting, said legal counsel and action might be needed against an Exchange St. property in Clarendon where no progress has been made but Grants Administrator Lorri Dunlap said that may not be necessary as state officials told her that some municipalities are sending multiple notices to an owner and then proceeding with tear down without court involvement.

“(We) got to figure out a way to be more efficient with these properties,” Eggleston said. “In the next year, (there are) things we are trying to put in place that are going to address some of those things.”

Eggleston outlined changes in state law that would permit the county to approve a new ordinance that would allow the RDA to function as a landbank and “allows the RDA to use its funds to function like a land bank.”

That would allow the RDA to purchase and demolish properties, using the proceeds from the sale of those lots to roll back into addressing other blighted properties.

The authority approved a motion that would give Eggleston, Dunlap and Matve one month “to put a proposal together,” according to Eggleston. “(We) have CDBG funds we want to utilize as part of this process….I feel like I’m close… on the knockdown crew bit. There are some things we have some questions about.”

Matve said the county solicitor would need to review documentation in this effort.

“If we re-do the ordinance for the RDA to be a land bank, we have to think about where were going to get the funding for that.”

Dunlap suggested that the commissioners have the authority to implement a $15 fee on deed transfers that would go into a fund for blight initiatives.

“The issue is money,” she said.

Eggleston said the board of commissioners has no interest in passing that fee.

“You pass the fee and it isn’t a tax, some small group has to deal with it. I think that it sidesteps the responsibility of the community” to address blight, Eggleston said, noting he’d be willing to allocate tax money to address blight.

He said that the question is what is the fairest way to distribute resources.

“Warren County has always functioned with ‘What do they have that I don’t have?’… We’ve got to pitch the blight process continually to these municipalities.

“We have to understand there are municipalities in poverty that don’t have the means to (address) this problem,,” Eggleston said. “(We are) going to have to ask yourself ‘What quality of life do you want in Warren County?'”