Times Observer photo by Brian Ferry Forester Ken Kane of Generations Forestry directs attention to the forest canopy during a forest health tour at a location on the Allegheny National Forest in Mead Township.

Times Observer photo by Brian Ferry Forester Ken Kane of Generations Forestry directs attention to the forest canopy during a forest health tour at a location on the Allegheny National Forest in Mead Township.

The Allegheny National Forest has some health problems and a group of interested stakeholders went out to see some of those this week.

Among the 80 people that participated in the event were Warren County and Forest Area school district students, teachers, administrators, and board members, Warren and Forest county commissioners and other officials, city and township officials, foresters, a representative of a state senator, and the Allegheny National Forest deputy forest supervisor.

Warren County School District board member Arthur Stewart hosted the event at Cameron Energy where a 60-acre area of the ANF and a much larger, privately managed area are in close proximity.

“The Allegheny National Forest is enormous,” Stewart said. “It’s half-a-million acres. It has an enormous impact on our lives.”

He said the ANF was “basically a brush pile,” when it was imagined about 100 years ago. 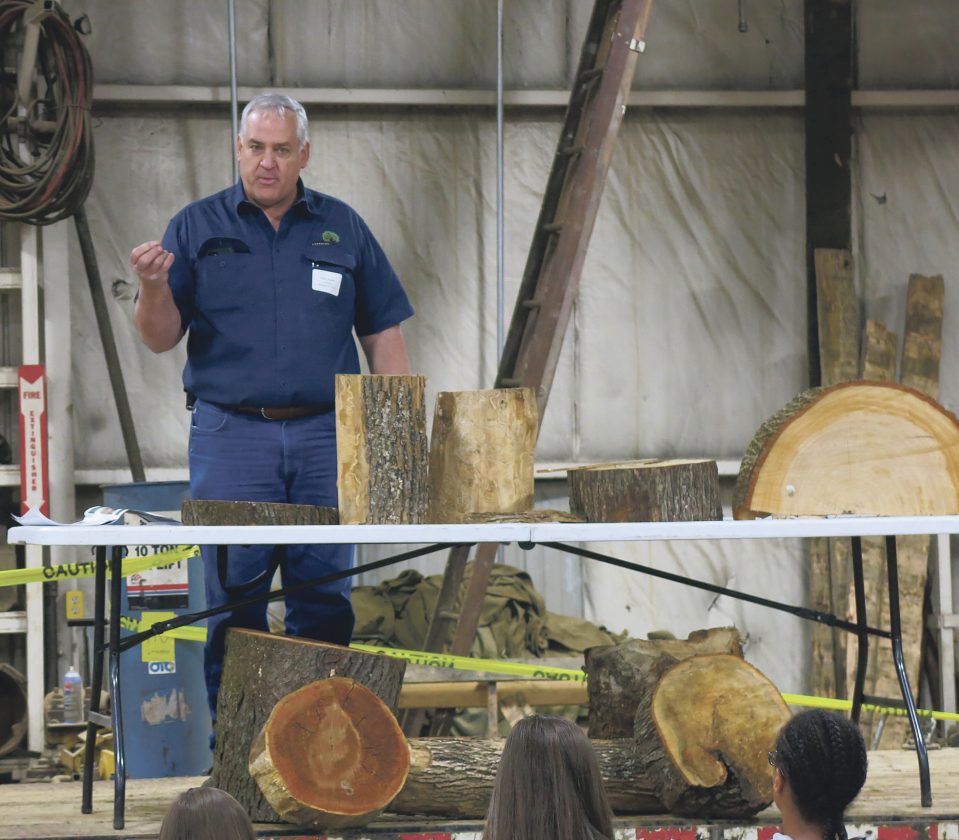 When the forest was created by the Weeks Act of 1911, officials realized that taking away the property tax revenue from school districts and municipal governments would be a hardship. The solution was to give those entities “25 percent of the revenue” generated by the forest, Stewart said. The overwhelming majority of that revenue “comes from harvesting trees.”

According to Forest Area School District Superintendent Amanda Hetrick, five percent of the district’s budget came from forest receipts at one time.

Then, “the money from the Forest Service was drying up,” Stewart said.

“That was having an enormous impact on school districts and townships,” he said.

The Allegheny Forest Alliance was founded to help reverse that trend, he said, and several AFA members were in attendance Thursday.

He said the latest concern is the death of ash trees due to the emerald ash borer. A large majority of those trees have been harvested on managed private lands, he said. A very small percentage of those trees, all of which will be dead and have no value within a couple years, have been cut on the ANF.

“There are about $40 million in white ash out on the ANF,” Stewart said. If that goes uncut, that is $10 million that the districts and townships will never see.

He and fellow board member Jeff Labesky were so impressed when they went out to see the situation on the forest that they invited more board members. Then, they decided to hold the forest health event.

Ken Kane, president of Generations Forestry of Kane, gave a brief history of the Allegheny National Forest and explained some of the challenges and problems on it.

Action could be taken swiftly in the 1980s. After a 1985 tornado cut a large swath through the forest, the salvage of the trees blown down “was done in a year,” Kane said.

Things started to change in 1994. At that time, the “first appeal of an ANF timber sale” was filed, he said. “You’ll see a steady decline from that point forward.”

“Environmental interests attacked (forestry on) the national forest,” he said. “The emphasis went into the process because of the challenges.”

The National Environmental Policy Act became the guiding force for projects on the forest. Under NEPA, some plans take years to get into motion. “As the ANF continues to be attacked, productivity drops,” Kane said.

Another problem is leadership transition, he said.

“We’re bringing professionals in (to ANF leadership positions) that aren’t familiar with this unique ecosystem,” he said. Many of those leaders move on quickly.

Several times, Kane acknowledged that the people at the ANF are not at fault for delays, particularly in the case of ash trees. “It’s no one’s fault but our own,” he said. “We can’t blame the ANF. They’re doing their jobs.”

“Challenges keep the Forest Service caught in the process,” he said.

After the introduction, participants boarded the three school buses brought to the event and were taken into the forest.

The first stop was the ANF location.

Several trees were marked, showing diseased and damaged trees (orange), ash trees (red), and trees that were healthy, mature, and ready to be cut (green).

Stewart pointed out several of the ‘orange’ trees that seemed healthy from the road, but had obvious rot visible from the other side.

The ‘red’ trees were “dead trees standing,” he said. The green have value and should be cut before they lose that value.

“It’s time for that to be turned into computers and iPads,” he said.

Doing so would also allow sunlight to reach the forest floor and encourage seedlings of species that need that light to grow.

He said if the forest is left to its own, the next generation of forest will be less diverse as birch and beech species that can tolerate shade will grow faster under the canopy of the existing giants and prevent the oaks, cherries, maples, and poplars from regenerating.

Forest animals need that diversity of food sources. “Fauna will decline as long as we see flora decline,” Kane said.

The ANF Forest Plan sets targets for age-balance in the forest. Kane said about one-third should be young, another third mid-age, and a third mature.

“In 2007, when the Forest Plan was new, early successional was at 8 percent,” Stewart said. “The Forest recognized that’s not enough young forest. When they checked it again in 2013 it was 3.8 percent.”

At the second location, the managed private land, Kane said “this forest has been replaced once since the one we just left.”

He said it is common to see accelerated growth in trees under active management conditions due in part to the presence of more sunlight.

Stewart said proper management of the forest would leave it as a better resource for future generations. He held up his granddaughter and said, “we’re not destroying it for her, we’re improving it for her.”

ANF Deputy Forest Supervisor Chris Cook was one of the participants in the event.

“We were very pleased to be invited,” Cook said. “We encourage the public to get involved with us.”

He told the group one of the best ways to do that is to submit meaningful comments during comment periods related to ANF activities.