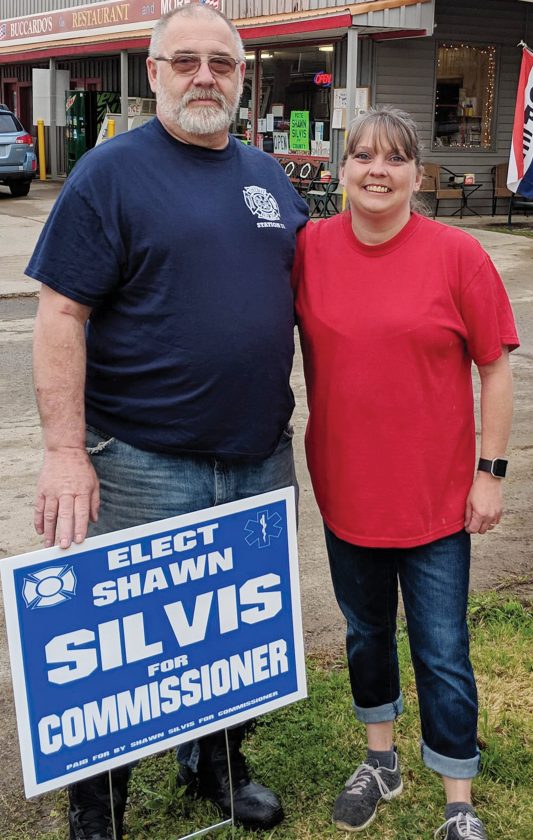 ¯ Give us some background on who you are.

¯ What experience do you bring that specifically prepares you for this position?

¯ What do you like or dislike about the job the current board is doing?

¯ What prompted you to run?

¯ What do you see in the future for Warren County? What do you hope to accomplish if elected to a term?

Of the five Republicans throwing their hats into the race for county commissioner, there is one who likes to think of himself as ‘The Lone Ranger.”

Shawn Silvis of Tidioute has been Warren County Deputy Coroner for the past two years. In addition to that, he has been with Titusville Emergycare Ambulance for the past fifteen years. Originally from Pleasantville, Silvis married his high school sweetheart, Tammie, whom he met when he was fourteen, just months after graduating from Titusville High School in 1981. They settled in his wife’s hometown of Tidioute and raised four children; Brandon has served in the US Navy for the last sixteen years. Mason lives and works in Virginia. Kaitlon lives in Tidioute with her fiance and 2 daughters. Morgon lives at home and will graduate from Youngsville High School this year.

As a volunteer firefighter since the age of 12, Silvis feels it is his 44 years of experience caring for the people of Warren County that most qualify him for a spot on the Board of Commissioners.

“I have thought about this a lot over the years, “ Silvis said as he explained his primary motivation to “bring the county together.”

As an active, certified EMT for 27 years, Silvis is well aware of the shortage crisis of first responders in Warren County. He is currently the Second Assistant Chief and Ambulance Coordinator with the Tidioute Volunteer Fire Department as well as one of the Board of Directors.

“It’s a nation-wide problem,” he said, “and it’s not just volunteers, but the city” also seems to have a shortage of people and equipment, according to Silvis. “Thirty years ago, the state of Pennsylvania had something like 370,000 volunteer firemen, now it’s down to 30,000.”

His first priority would be to look into “setting up a fund for first responders,” claiming that whenever there is a need, there is “no money to help out,” and the commissioners seem like they “don’t want to support” first responders.

“My wife asked me, ‘what do you know about politics?'” To Silvis, “this isn’t about politics, it’s a job that needs to be done.” According to Silvis, a commissioner should be able to “fill up more than a couple hours a week, this would become my full-time job.”

“It may take a while to go over the budget,” he says, expecting to put in some long days, but he looks forward to the opportunity to address some things line by line and just asks “why?” when he sees a need that is not being met.

“I scrounged to beat hell for 100 signatures,” he said. “I went door-to-door and got each and everyone myself,” He figured, “if I couldn’t do that, I shouldn’t be running.”

Silvis envisions a future where Warren County as a whole can “come together and support each other.” He laments that “everything gets concentrated on the city” and the outer boroughs are often marginalized as a result.

In addition to funding first responders, Silvis would the county commissioners to have more of a presence at all monthly fire department meetings around the county.

“The commissioners need to put more time in.” According to Silvis, on the rare occasions that the commissioners to appear at a meeting, “The first thing you hear is, must be an election year.”

He says it wouldn’t take much more effort than what the current commissioners are putting in, adding that, “Just a phone call from one of the commissioners” would make all the difference.