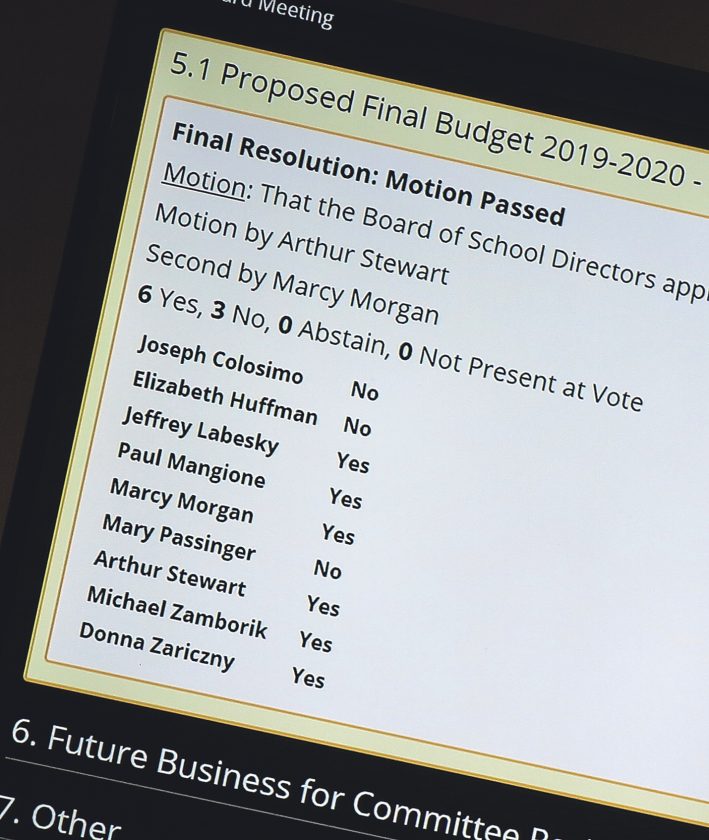 Times Observer photo by Brian Ferry The board voted by a six-to-three margin with to approve the proposed final budget — with the red line and tax increase as presented. The final budget must be approved by the end of June.

A one-mill tax increase made its way to the school district final budget vote which will take place by the end of June.

School board members discussed ways to eliminate or reduce the proposed tax increase during Monday’s regular board meeting.

Those discussions did not result in a change to the final proposed budget.

But there is still time to change that budget and it appears that the board will discuss that possibility.

Board members talked about “moving the red line” down to save money instead of raising taxes. The board takes a look at possible adds and cuts, prioritizes them, and a red line is placed by administration at a point that seems to reflect the will of the board. That line then becomes a starting point for where budget cuts and adds are set.

“The red-lining and choosing where to put that red line needs to be discussed more at the board level,” board member Joe Colosimo said.

He pointed out that one of the items just below the line was a cut to central administrative office. “It doesn’t make it to the line because administration probably doesn’t want to lose that position,” Colosimo said.

That position is supervisor of secondary education, left vacant since Eric Mineweaser took over as director of curriculum, instruction, and assessment.

That kicked off a discussion of the history of cuts in the district.

“I have to bring up the central office thing again,” board member Mary Passinger said. “That sets the tone of what the board is trying to do, For at least the last 10 years, we have been absorbing job after job. We’ve been laying off teachers, custodial, cutting numbers. The rationale has always been, ‘we’re losing students.'”

“We have a job that has come open in central office through attrition,” she said.

“About 12 years ago we had three people doing that work,” Superintendent Amy Stewart said. “We’re down to two. You’re asking us to go down to one. To go down to one-third of capacity of where we were in that department… you would be disappointed.”

Stewart said the perception that the district has constantly cut teachers is not true. “We have more than we had five years ago,” she said.

“We have cut more central office staff than we have cut in any of the other contractual areas,” Arthur Stewart said.

The discussion returned to taxes and the budget.

“We’re going to the community and we’re saying the financial situation is so dire… we need to raise your taxes again,” Colosimo said. “The majority of the board has said we want to cut that position and it doesn’t make it to the line. That’s an opportunity to save some money in a year in which we’re raising taxes again.”

“I also questioned the placement of the red line,” board member Jeff Labesky said.

He suggested that moving the red line down, regardless of what is on the lines, would be in the best interest of the district and the taxpayers.

“If we can get out of that orange column whatever it takes to avoid a tax increase…” Labesky said.

As approved, the first items below the red line are delaying the purchase of secondary English language arts textbooks ($300,000), eliminating the central office position ($93,681), reducing the elementary teaching staff by the equivalent of three teachers — keeping class size maximums at their current levels ($511,668), and reducing the secondary teaching staff by four — in social studies and music.

The proposed tax increase of 1 mill would bring about $400,000 in revenue to the district.

“We have to do something as a school board to start changing the way we do business,” Labesky said.

According to a five-year budget projection prepared by Director of Business Services Jim Grosch, the district could be millions of dollars in the red after the 2022-2023 school year.

“Three or four years from now, that 1.86 mills (the maximum allowable increase this year) is going to be meaningless in terms of balancing the budget,” Labesky said. “Even with the tax increase… that’s still just a drop in the bucket.”

“I agree about the lack of palatability of raising taxes,” Arthur Stewart said. “I would vote for the expenditures, holding the red line where it is, with no tax increase.”

“I know that would throw us further into a deficit,” he said. “I look at some of the things that are below that red line… I don’t want to cut more teaching staff. I see the administrators are taxed to their capacity.”

“We’ve been taking every extra penny and throwing it in the bank for a rainy day,” Stewart said. “This is that rainy day.”

He said there is movement to pressure the state to come through with some kind of break on districts’ payments into PSERS — retirement accounts for state employees.

“Maybe we should deficit spend a little bit to help turn up that pressure,” Stewart said.

Labesky said he would not be opposed to deficit spending, but still wanted to look at the red line. “I’m confident that, as a group, we could come up with three or four or more of that list that could go away and that tax increase would not have to happen. I think we need to discuss it before we put this out to a final, final vote.”

The board voted by a six-to-three margin with Colosimo, Passinger, and Elizabeth Huffman voting against, to approve the proposed final budget — with the red line and tax increase as presented. The final budget must be approved by the end of June.