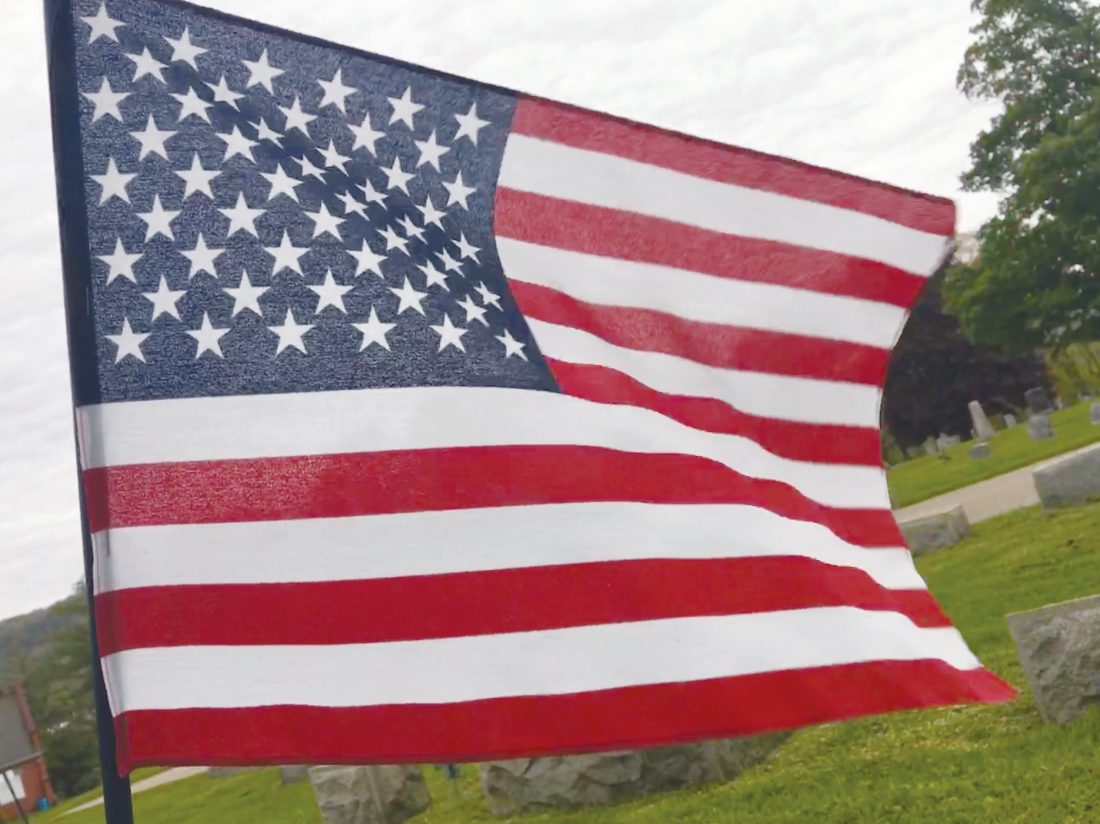 Times Observer photo by Dave Ferry An American flag’s broad stripes and bright stars gallantly stream above a grave belonging to a veteran at Oakland Cemetery. Between now and Monday, May 27 workers and volunteers are making sure there are American flags standing over the graves of all veterans in Warren County’s cemeteries.

In preparation for Memorial Day, workers and volunteers are making sure there are American flags standing over the graves of veterans in Warren County’s cemeteries.

There is a lot of work to be done between now and Monday, May 27.

According to Veteran Service Officer Delores Stec, the county code requires that the grave of every veteran will be decorated with a flag, “They have to be up from Memorial Day through Veterans Day.”

According to Stec, the Warren County Veterans Affairs Office gave out 8,271 flags this year.

That is down from last year’s 8,695. The number of graves is not decreasing. Instead, some of the flags are in good shape following a year of use and are reused, Stec said.

Some cemeteries only get a handful.

“There are about 183 cemeteries here in Warren County,” Stec said. “Some of them are family burial plots.”

And some are much larger. More than 1,600 of those flags went to Oakland Cemetery.

Stec has 31 contacts she reaches out to when it is time to put up flags.

At some locations, personnel employed at the cemetery take care of the flags. It is a job for volunteers — Scouts, organizations, family members — at the vast majority of the cemeteries.

As an example, 11 Scouts from Boy Scout Troop 13 of North Warren planted flags at veterans’ graves in Wetmore Cemetery along Route 62 and Westview Cemetery off Wiler Road in Starbrick.

The Scouts perform that task “as a community service activity and out of respect for those who served,” Troop 13 Scout Leader Dan Glotz said.

It is possible that there are veterans who are not on any list and the county is not counting them toward the flags. “If they come across a veteran that does not have a flag or a holder, contact us,” Stec said. “If I have records for them or they can show me their DD214 or Separation Papers” she will not hesitate to make sure that veteran is properly honored.

Flags that are broken should be replaced by calling the office. Flags that fall may be respectfully put back into the holder.

Individuals or organizations interested in being in charge of a cemetery may contact Stec. “Right now we have all the cemeteries covered,” she said. “I keep them on file until the time comes. We just want to make sure it gets done.”

The ‘snow’ must go on: Winterfest Saturday and Sunday at Chapman