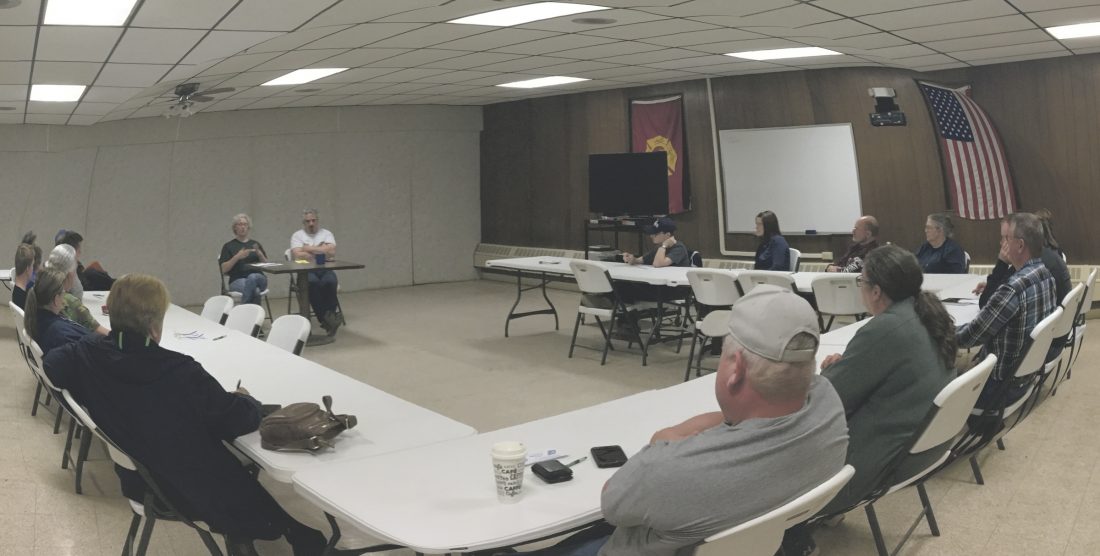 Times Observer photo by Dave Ferry Close to 20 residents of the Farmington Township area convened at the Lander Fire Hall to discuss possible solutions to lagging internet speeds. Elaine Bailey and Kevin Custer of WestPA.net were on hand to answer questions and provide their insight into the whys and hows of lousy rural internet.

On its surface, the head-scratching conundrum of the rural internet problem seems needlessly complicated. Especially if you’ve ever experienced anything remotely approaching what the Federal Communications Commission (FCC) deems minimum broadband upload speeds of 3 to 5 megabytes per second. If you haven’t, chances are pretty good that the internet doesn’t play a very significant role in your everyday life… at least not in your home.

As reported by Josh Cotton in the Feb. 24 edition of the Times Observer, only 10 percent of Pennsylvania residents meet the minimal requirements. And that’s not just in our home state; according to the FCC, the 2018 Broadband Deployment Report ranks the U.S. 10th out of 28 countries for download speed with elevated rural areas reaching only 61%.

So, it’s a problem. But why is it a problem?

That is just what 20 residents from the Farmington Township area set out to solve Wednesday night at the Lander Fire Hall.

About a year ago, Damion Wise of Farmington Township set out to find an explanation as to why his internet service is so poor. “I pay for 3mbps,” he said. But whenever he would perform an internet speed test it would only register “2.1% or as low as 1.5%, and that’s with a mini-booster tower.”

Wise works with Warren General Hospital and recently built a house at the top of a hill. If bad internet was a deal-breaker, he might have packed up and gone to where the gigabytes flow like water, but instead he was determined to find answers.

He began by “putting flyers in mailboxes” hoping to discover a latent interest. Along with his neighbor, they followed- up by going door to door to people’s homes and asking them how they feel about their internet.

“Everyone complained” about their internet, “except one” lady who claimed to hate the internet so much that she threw out all of her computers, according to Wise.

At that point he realized lack of interest wasn’t the issue, at least not in his immediate vicinity.

The next step was phoning the various Internet Service Providers (ISP) in the area to get more information. After speaking with representatives with Atlantic Broadband, Verizon and WestPA.net, the rough figure that kept coming back from each one was somewhere in the range of $50,000/per mile to outfit the existing utility lines with the appropriate fiber optic network that could service everyone.

But hold on…you might be asking yourself: with all the telephone poles stretching as far as the eye can see, wouldn’t hanging new lines on them be relatively easy? Sure, it will take time and money, but $50,000 per mile?

Despite the apparently ubiquitous challenge of providing internet service from sea to shining sea that seems to discourage most ISP’s from tackling the issue, WestPA.net agreed to appear before the Farmington residents to answer questions and offer solutions.

“I feel so many communities’ pain,” Elain Bailey of WestPA.net said.

WestPA.net provides service to Warren County School District, including Eisenhower High School on Route 957. But that fiber network was only built to service the schools, and “not designed to connect to homes,” according to Bailey.

“Those lines were put in years ago,” she said. In some cases they may even be older than our parents’ parents.

That means not only is the existing wiring substandard, but the actual poles themselves would require modifications in order to accommodate new facilities. If, for example, WestPA.net wanted to string lines up alongside the existing telephone and electrical lines, it would absorb the engineering costs of upgrading the poles to fit their needs. And if that wasn’t enough, the poles themselves are owned by companies such as Penelec, Verizon, REA, etc., and require yearly rental fees.

“It wasn’t always that way,” Kevin Custer — with WestPA.net — said. According to Custer, there was a time when you might have been able to add new services to any existing utility pole at lower costs, but now the need is too great in order for to make sense fiscally.

Rural “Pennsylvania’s lines were not done properly” to accommodate modern internet traffic, according to Custer.

That could be one of the reasons why we see better broadband speeds in more dense, urban centers such as Pittsburgh or Philadelphia. Their original networks were designed to serve much bigger populations and made upgrades relatively more cost effective.

Many people have found compromising solutions to their internet woes. Whether it’s your cell phone, satellite dish, or throwing it all in the garbage, most people are willing to put up with a lot. But there is no question that a direct fiber optic network to the home would be a vast improvement.

Wise’s neighbor, Dave Genung, is Operations Superintendent with Exxon Mobile. When he’s not farming it up in Farmington Township, he works all over the world.

“I’ve been in Nigeria, where there are no lines, no telephone poles.” Genung said. “If people want power, they have a generator and they still have better internet service than (we do here).”

The question he asked was about the feasibility of installing a wireless transmitter, or tower that could service everyone.

Custer added that our unique topography and dense foliage of the trees absorb and reduces the Radio Frequency (RF) strength. This might explain why wireless signal strength seems to fluctuate along with the weather and seasons.

“There would need to be a tower at the top of every hill,” Bailey said, in order to reach everyone. One lightning storm could potentially knock out service.

The representatives with WestPA.net view any possible solutions to this dilemma one community at a time. They have provided traditional CableTV and fiber to the home internet access to small communities sush as Ludlow, Swede Hollow, and most recently in Lander.

Due to the cost prohibitive nature of adding services to existing facilities, they suggest the best solution is to install new utility poles just for their network. This option presents a potential complication if any residents don’t want to see more utility poles.

“We don’t want property owners upset about poles on their property,” Bailey said.

With a required distance between poles of 120 feet, that factors into 43 poles per mile. So, not only would the interest in improving internet speed need to be there, the willingness to add more utility poles is necessary for any action to be feasible.

When asked about the possibility of applying for federal grant dollars to offset some of the cost, Bailey said it’s not that simple.

Applying for grants is a long and complicated process, and Bailey suggests they would need to hire at least “two full time equivalents” just to process the applications. After that, even if they were awarded the grant dollars, the actual work would need to be open for bid, meaning there’s no guarantee they would be able to utilize the vendors they have known and trusted for years. On top of that, the agency dispersing the grant dollars then could have a say in how it’s used.

Other questions, such as running lines underground through conduit, could only be considered on a case-by-case basis. Underground installations cost five times that of aerial, according to WestPA.net. In the instance that a property owner doesn’t want a utility pole near their home, they would consider going underground with permission. But the chances of someone mindlessly digging up the buried lines adds to the cost when considering the relative ease of repairing aerial lines.

So, until such time as some new technology provides a simpler solution, it remains an on-the-ground, one-step-at-a-time process that would require action and from nearly every community member to see any real change. Both the residents and the WestPA.net reps were optimistic that they could see improvement in their neighborhood by the end of the year. But what about the rest of the neighborhoods?

Only time will tell.

By the end of the meeting, conversation began to drift into the various services that WestPA.net provides. Some in attendance began to glaze over talk of megabytes, and bandwidth, etc.

“I just want to be able to send an email,” said Joe Hedman of Farmington Township.