Freedom of the press 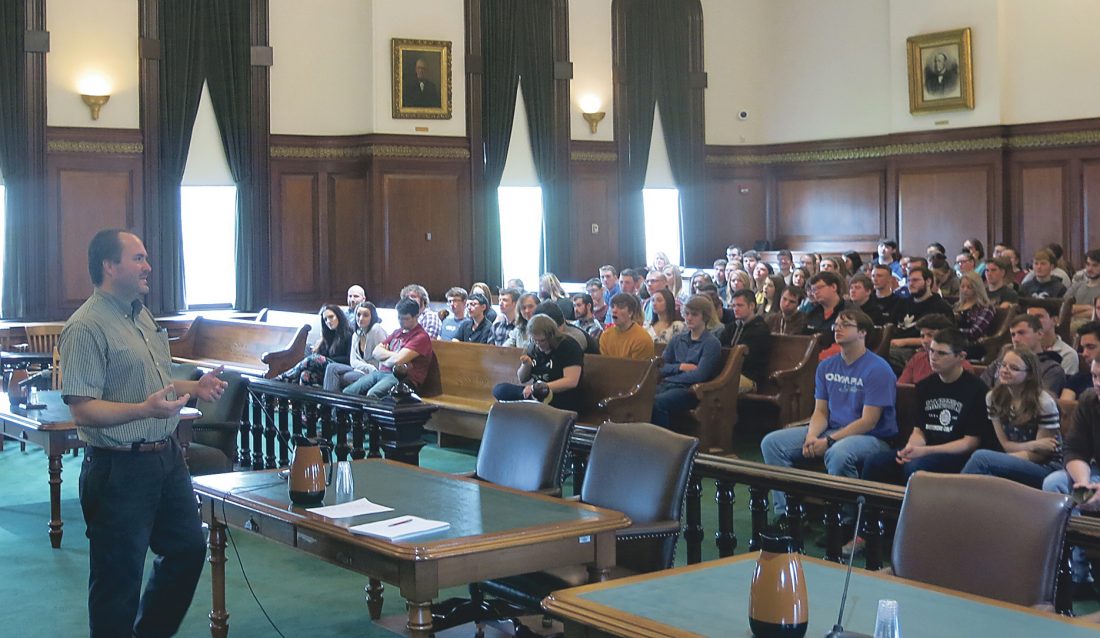 I’ve been to Law Day a number of times.

It’s always been fun for me. I get to wander around more than usual and use a camera in the occupied courtroom.

I learn more about the law and those who uphold it.

And the stories about the history of our courthouse, the shooting of a judge in his courtroom, the bullet holes that are still there, never get old.

This year was different. Assistant District Attorney Cody Brown, president of the Warren County Bar Association, asked me if the Times Observer would participate and talk about the freedom of the press. I immediately agreed despite knowing there was at least a decent chance I would end up doing the presenting.

That’s how it went.

I went to the courthouse Wednesday morning, outline in hand, hoping to say something not stupid related to freedom of the press.

As I told the couple hundred students in the audience, I usually sit in the back corner and listen to what’s going on, not stand at the front and do the talking.

Brown called my colleague Josh Cotton and me down. We had split up the event. He would cover it and, mostly because I had been the initial point of contact for Brown and I had spent three minutes making an outline, I would do the presenting. I knew I could call on him when I got tripped up or just stammered to a halt (only two or five times).

Outline in hand, I figured I could take up 10 minutes if I really had to and a little more if students had questions. It turned out I made it well past 10.

Freedom of the press is big for people in my business. It is a check on government power. It allows us to feel confident that we will not suffer official retribution for doing our jobs well.

I have no more (legal) access to the activities of government than anyone else, but I am the one who is there to tell the citizenry what is going on. Because of freedom of the press, those governments I’m reporting on can’t tell me what to do or not do.

There are limits. Skerda asked me to cite some examples of times I have had to exercise discretion. There are plenty.

The power of the press is such that stories can impact lives. People can lose their jobs. Families can be broken up. If I have done my job right, those impacts are not my fault — the actions I’m reporting on caused the problem. I don’t want them to ever by my fault.

Further, our readers have sensibilities. There are things they should not have to see nor read. We do approach those limits and, not infrequently, we upset some people.

I have limits. There are things I don’t want to cover.

My bosses (and their bosses) have limits.

Sometimes, the public good is served by me not running with a story right away. If a public document says someone is wanted for a serious crime and I go with the story, that person might take off or hide.

We often protect the identities of victims and people under the age of 18.

How freedom of the press works in the case of the traditional press is relatively familiar.

Since I was talking to young people and those who had spoken before had already discussed social media, I had to go there. That was tough. I’m confident everyone in the audience knew more about social media than I.

Dougherty said social media is “the easy way out.”

It can be a useful news tool. I have found out about stories more quickly because someone posted on Facebook.

But I have also chased a lot of invisible rabbits down bottomless holes.

When I write something, I want it to be accurate. I want readers and sources to trust me to do that.

I see very little concern for that on social media. I don’t like that there has to be the term ‘fake news.’

News should be news.

After my presentation, I hung around. I sat in the jury box — pretty comfortable. I moved on to the witness box — not comfortable. I chimed in once or twice to help answer student questions.

It was odd being the news… the subject of news reporting. It wasn’t terrible, but I think I’d rather sit in my corner and listen.