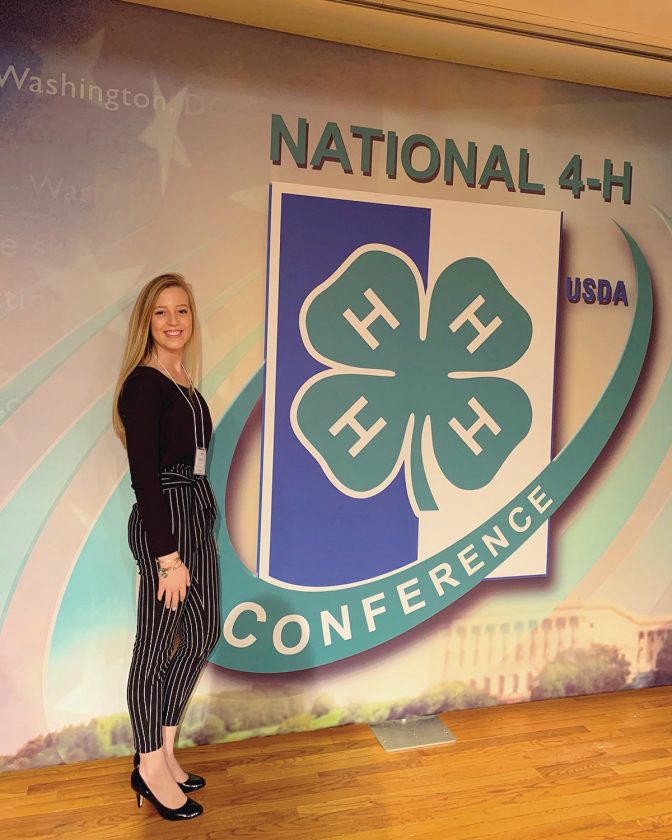 Photo submitted to the Times Observer Audrey Ferrie was chosen to represent Warren County 4-H at the National 4-H Conference held near Washington D.C. in April. She was one of three 4-H club members chosen from the state to attend the event that included more than 300 delegates from across the U.S. and its territories.

The saying “two heads are better than one” indicates the combination of two brains working together to solve a problem.

So what happens when you bring 14 heads together? Audrey Ferrie, of Warren, is hoping her recent brainstorming session results in positive social change right here in our own community.

Ferrie was chosen to represent Warren County 4-H at the National 4-H Conference held near Washington D.C. in April. She was one of three 4-H club members chosen from the state to attend the event that included more than 300 delegates from across the U.S. and its territories.

During the conference, the delegates choose a topic relevant to society then break into groups and brainstorm ideas to address it. Each group has a college student function as the facilitator. Following two days of coming up with ways to tackle the topic, each group presents their briefing to federal officials around the Washington, D.C. area.

There were 14 delegates in Ferrie’s group.

“We came from diverse backgrounds,” she said. “One boy lives on an island that’s only 14 miles long.”

The topic her group chose to address — cyberbullying.

Ferrie cited some disturbing statistics she learned during the conference. “One in six high school students are bullied electronically,” she said. Unlike physical or verbal bullying, cyberbullying often takes place outside the school environment, leaving school officials unable to deal with it, she said.

According to the Pew Research Center, 59 percent of U.S. teens have been bullied or harassed online, and a similar share said it’s a major problem for people their age. At the same time, teens mostly think teachers, social media companies and politicians are failing at addressing the issue.

Ferrie’s group focused on finding ways to educate both youth and adults about the issue. They came up with ads in the form of a poster and magnet that let victims know they are not alone. “Magnets can be hung in a bathroom,” she said. “It’s a discreet way of letting victims know that help is there.”

With the conference behind her, Ferrie is awaiting more direction from federal officials who were very receptive to the group’s presentation. “They’re the key decision makers,” she said.

In the meantime, she is finding ways to share her message through local presentations.

“I will be serving through community service and connecting with the Federal Trade Commission on this nationwide problem,” she said. “I will share my experience and spread the positivity the conference left me with.”