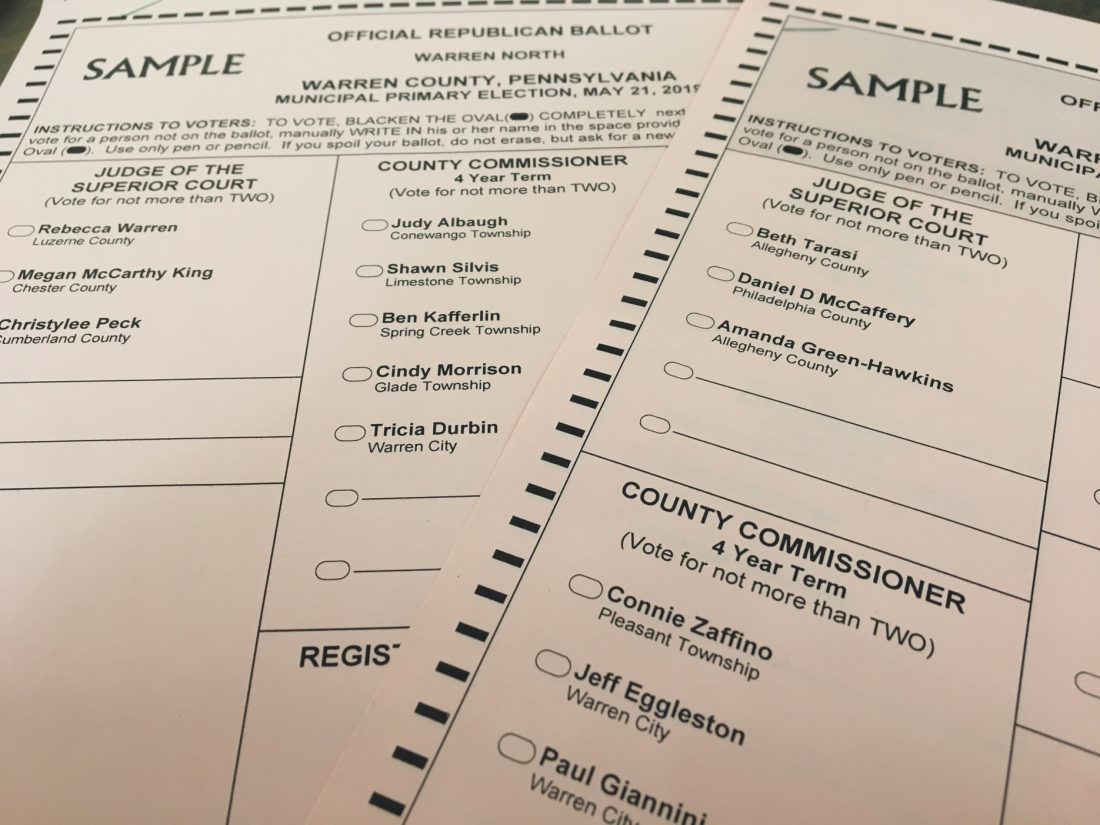 Times Observer photo by Josh Cotton Primary polls open at 7 a.m. and close at 8 p.m. Unofficial results will be posted om warrenvotes.com throughout the day.

Polls in this cycle’s primary election in Warren County will open at 7 a.m. and will close at 8 p.m.

As the results come in Tuesday evening, they will be posted to warrenvotes.com. County Elections Director Lisa Rivett said, however, that the results posted there will be unofficial.

The most notable contest in Tuesday’s primary are the contested nominations for county commissioner.

While there have been exceptions, the two Republicans selected today are likely to be among the top three vote-getters in the fall general election, given the political demographics of the county. Those demographics also typically result in one of the two Democrats selected in the primary assuming office.

The remainder of the offices up at the county level are unopposed. Republican incumbents including Lori Bimber for register & recorder, Ken Klakamp for sheriff, Dennis Munksgard for treasurer, Sue Swanson and Rick Hutley for auditors (the sole race where you can vote for two candidates) and Jennifer Phillips for prothonotary are on the ballot and unchallenged by any other Republicans as well as any Democrats. Heleena Swanson is seeking election, unopposed as well for the seat as the third auditor.

While there’s no race yet, the primary for Warren City Council – where three seats are up for grabs – will set the stage for a race in the fall. Democrats Phil Gilbert, Aaron Stearn and Douglas Hearn, as well as Republicans John Wortman and Christian Zavinski, will all presumably move through to the fall general election.

Locally, a host of municipal offices – such as supervisor, auditor, tax collector, etc. – will be part of Tuesday’s ballot.

One state-level race will also be included – two seats on the Pennsylvania Superior Court. Voters will select a maximum of two and there are three Republicans and three Democrats seeking election to the post.

The Pennsylvania Bar Association has made recommendations regarding the candidacy of each of the six individuals.

Both King and Peck were given the status of “recommended” by the Pa. Bar Association. Those recommendations detailed that King is currently a deputy district attorney and was found to be fair, well prepared, intelligent and articulate and Peck, a Court of Common Pleas judge, was found to be a hard worker, articulate and approachable with legal opinions that are considered “logical, well reasoned (and) thoughtful.”

Warren was deemed “not recommended” by the Association because she did not participate in the reviewing process.

McCaffrey, a Common Pleas judge, received the highest designation from the association – that of “highly recommended” – citing his “judicial leadership,” the quality of his writing, his experience, a “high degree of professionalism” and a “good judicial temperament.”

The other two Democrats were rated as “not recommended.”

According to the Pa. Bar Association, Tarasi, an attorney in private practice, “failed to exercise oversight of plagiarized content on her social media website” and “failed to accept responsibility” when challenged by it, “leaving the commission with concerns about her character and integrity.” Green-Hawkins, an attorney with United Steel Workers, was found to have a strong work ethic but not the requisite experience and preparation needed for the Superior Court, the Association concluded.

The count will be finalized and write-in votes will be counted on Friday morning at the Warren County Courthouse by the Warren County Board of Elections – comprised of County Planner Dan Glotz, HR Administrator Kim Exley and Veterans Affairs Director Ed Burris.