Allegheny Forest Health Collaborative: Out with the old and in with the new

Times Observer photo by Josh Cotton This shows the challenge that foresters face – this vista may look like a disaster. But this is early successional habitat. It’s a younger forest. This is the challenge that private foresters and federal officials face – educating the community that vistas like this will be more prevalent moving forward and are good for the health of the forest. 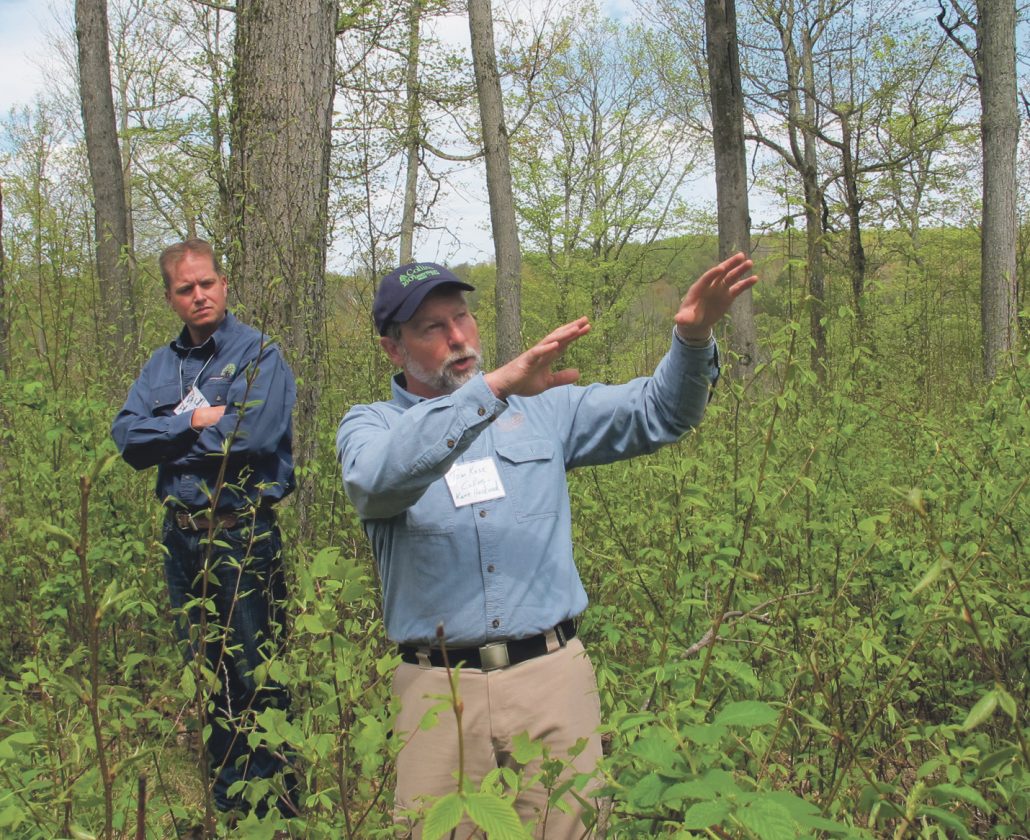 It’s easy to assume as we drive by that a forest stand with tall trees must be healthy.

But as the age of the forest on the Allegheny Plateau – which includes the Allegheny National Forest as well as surrounding land in Pennsylvania and New York – increases to a “mature” and “very mature” state, a set of serious forest health problems are emerging.

And those challenges don’t stop at the boundary of the ANF. The solutions are going to require collaboration among all the entities that work, live and play on the region’s forests.

And that’s where the Allegheny Forest Health Collaborative fits in.

A media event was held on Wednesday at the University of Pittsburgh at Bradford – which included field stops on Bradford City Water Authority and Allegheny National Forest property – to highlight the health issues. 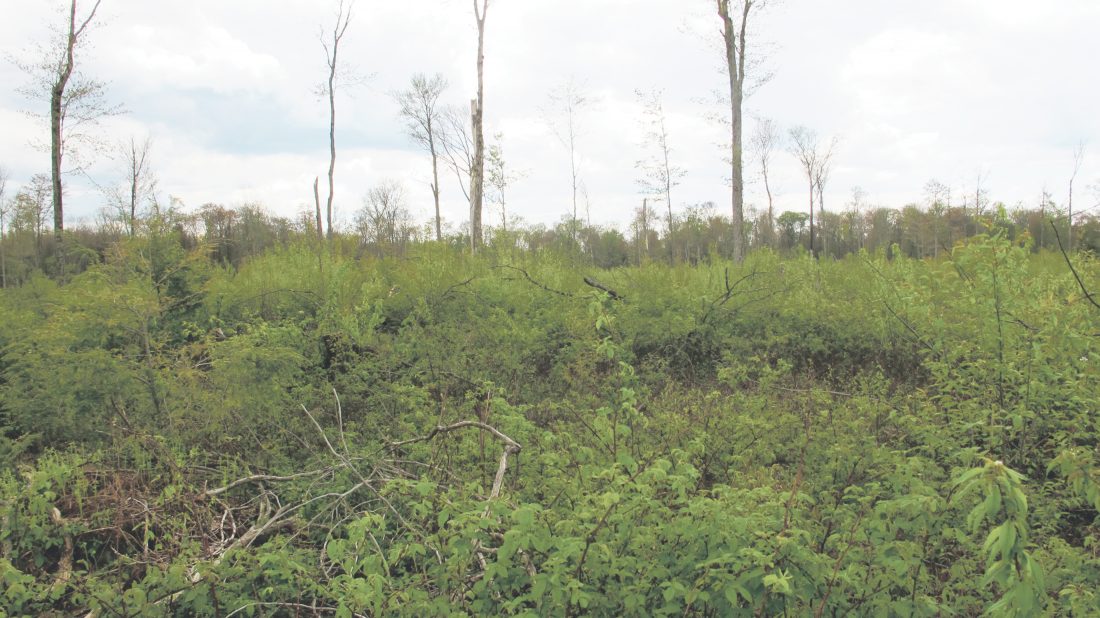 Times Observer photo by Josh Cotton This shows the challenge that foresters face – this vista may look like a disaster. But this is early successional habitat. It’s a younger forest. This is the challenge that private foresters and federal officials face – educating the community that vistas like this will be more prevalent moving forward and are good for the health of the forest.

To understand where we are requires an understanding of where we’ve come from.

Andrea Hille, silviculturist with the ANF, noted that the original forest that was here was primarily beech, hemlock, sugar maple – species that were tolerant of share. The timber industry essentially wiped that forest out starting in the 1880s into the early 20th century. The current forest, she explained, – cherry, red maple, etc. – is less tolerant of share and “more strongly influenced by human activity.”

She said the ANF is “very focused” on balancing those age classes. That includes “slowly ramping up the timber plan,” which is one of the most valuable on the national forest system.

She said the goal is to “work across ownerships, focus scarce resources where needed” and “collectively try to understand things together” from different perspectives. “All of this is tied to what we call a community of practice” and a “common vocabulary” in how the plateau’s forests are managed.

A series of strategies were developed to respond to those issues which turned into working groups.

That’s included numerous recommendations and research ideas, including the federal NEPA process, to look at “how can we be more responsible, more nimble,” Hille said.

The Collaborative has continued to meet twice annually to share information.

“We want to continue this work toward shared stewardship of our landscape,” Hille said, noting the recommendations of the AFHC are consistent with the ANF’s Forest Plan.

The first site on the Bradford City Water Authority property was left in decline as a teaching tool.

“It’s a very over-mature forest,” John Saf with Generations Forestry explained. “It’s time we try to rehab this site (and) get the forest healthy again…. This is the human equivalent to someone on their deathbed.”

The stand was dominated by diseased beech trees which carry no commercial value. “(We) would like to see a mix,” Saf said, noting that many places on the ANF resemble that stand’s current condition.

“(We) need to be thinking hard about that next generation,” Saf said, noting that the Collaborative’s goal is “to try and head these off. As foresters, (we are) trying to come up with new techniques” thinking “totally from a forest health perspective.”

“Do nothing in the worst thing,” he said, noting nothing is happening in many places on the Plateau.

To contrast a stand on its “deathbed,” the stand across the road clearly shows what proper management can look like.

Saf said the beech were moved and said they “left anything desirable.”

As a result, maple and cherry trees that were left have seeded the stand naturally.

“Natural seedlings are going to be the most competitive seedlings in the future,” Saf explained, creating “as diverse a situation as possible.”

Those are more economically viable species but Safe noted “it’s a much more vibrant stand” for wildlife, as well.

Perhaps the most obvious indicator of that are the songbirds heard in the second stand that were nowhere to be found in the first.

Saf called this taking a “disaster and turning it into something very productive” and doing their job as “land stewards.”

But here’s the rub – taking a stand from a mature of over-mature forest is a drastic change.

“To the average person, this looks like a disaster,” Saf acknowledged. “This is the future.”

“We have to go through a lot of change to get here,” he added. “There are so many benefits that come from proper management.”

That kind of drastic change isn’t solely happening on private forest lands, though.

The ANF is also now creating those early successional stands.

Josh Hanson, silviculturist on the Bradford District, noted that the ANF is going to be changing drastically in the coming decades.

The group went to the Greater Stickney project area which, Hanson said, was a shift for the Forest Service to an “even age regeneration” similar to what was done at the last site.

Arriving at the site, the faces of the foresters lit up.

It’s a place that also now looks like a “disaster” but, to the trained eye, is an example of an approach that will ultimately improve the health of the forest.

“The conditions (are) going to change,” Hanson said, acknowledging that to the “average person” the site looks “pretty rough.”

“The whole purpose is to create early successional habitat,” he said. In addition to a younger forest, it also results in wildlife habitat.

“This is going to be much more common” on the forest, Hanson noted.

Hille speculated that the 8-10 percent goal of early successional habitat can be met within a decade as efforts are increased to address forest health.

“It’s on us to try to communicate what is happening,” she said, acknowledging that this kind of forest management is “something that is very visible.”

Hanson said the projects he’s been involved in during his time working on the ANF have been “so focused on forest health” where federal officials are “responding to ‘Where do we need to act now while (it’s) not too late?'”

And as these efforts to regenerate the forest continue, there will need to be a strong relationship between forest management and research efforts.

Susan Stout, a retired forest researcher, talked about research initiatives into the regeneration of black cherry and the various hypotheses that researchers are developing to explain what the foresters are seeing on the ground.

“We have a perfect storm of forest health (issues) that are urgent (and) converging on this area,” Stout said. “What’s the best way to respond? Bring every brain together so we can all adopt best practices as they emerge.”

“We want to sustainably manage these forest,” Hille added.

“We have a responsibility as land managers to hand off to future generations and bring it back to a healthy condition,” Tom Kase, land manager with Collins-Kane Hardwood said. “(We’ve) got to constantly regenerate them.”