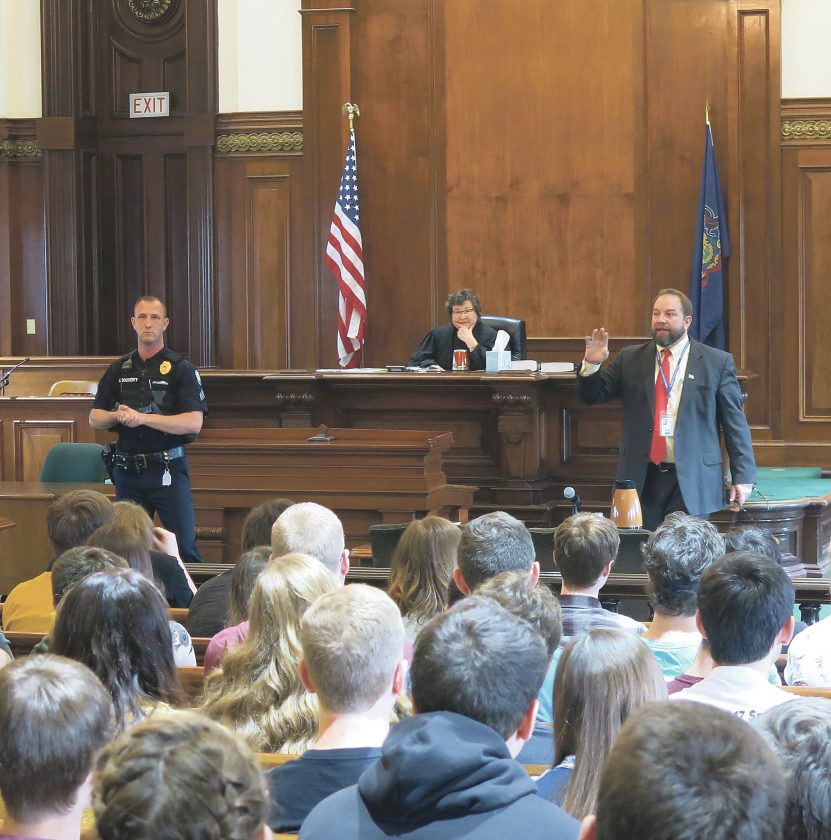 “The law” can be an abstract concept.

But on Wednesday at the Warren County Courthouse – Law Day – high school seniors from Warren and Forest counties heard from court officials on much more practical issues.

The focus of the event – which included students from Warren, Youngsville, Eisenhower, Tidioute and West Forest high schools – was the First Amendment, and specifically how social media fits within that construct.

President Judge Maureen Skerda told the students that Law Day was created by President Dwight D. Eisenhower as a response to May Day celebrations in Communist countries.

“We hope to challenge you about the first amendment,” she said.

The case initially debated centered around a student that created a forum online as a means of insulting another student. The student was ultimately suspended from school and the question was whether that speech should have been protected under the First Amendment.

Chief Public Defender John Parroccini told the students that “posting things is no different than saying them.”

District Attorney Rob Greene added that the First Amendment is “absolutely” the most important but cautioned the students that “your speech is restricted in some ways,” specifically when it causes a “substantial disruption.”

First Assistant District Attorney Cody Brown, who is also president of the county Bar Association, noted that images and messages deleted can be retrieved by law enforcement.

City of Warren Police Community Service Officer Sgt. Jeff Dougherty specifically addressed threats either spoken or posted online and talked about how society has taken that language far more seriously than they did 20 years ago in light of some of the incidents that have occurred.

“If you know not to say it, don’t say it,” he said. “We get a lot of complaints about social media. It gets abused a lot and when people abuse it, you get in trouble.”

“How many times do I hear, ‘I didn’t mean it. It was just a joke,'” Greene added. “(You) have to be very, very, very careful what you say” regarding acts of violence.

Discussion then shifted to relations with law enforcement, especially in light of all the incidents that have occurred in the last couple years.

“Law enforcement (officers) truly care,” Greene said. “They are not all out to make arrests” and aim to “serve the public” and keep people safe.

Dougherty encouraged students who may be pulled over by law enforcement to “stay calm,” be courteous, tell officers if you have a weapon, keep your hands on the steering wheel and turn the dome light on if the stop occurs at night.

“Our job is dangerous,” Dougherty said, calling for “Compassion.”

“They’re scared, too,” Greene said. “Do whatever you can to eliminate their fear.”