‘Call it a tornado’

Officials size up the aftermath of Sunday’s storm 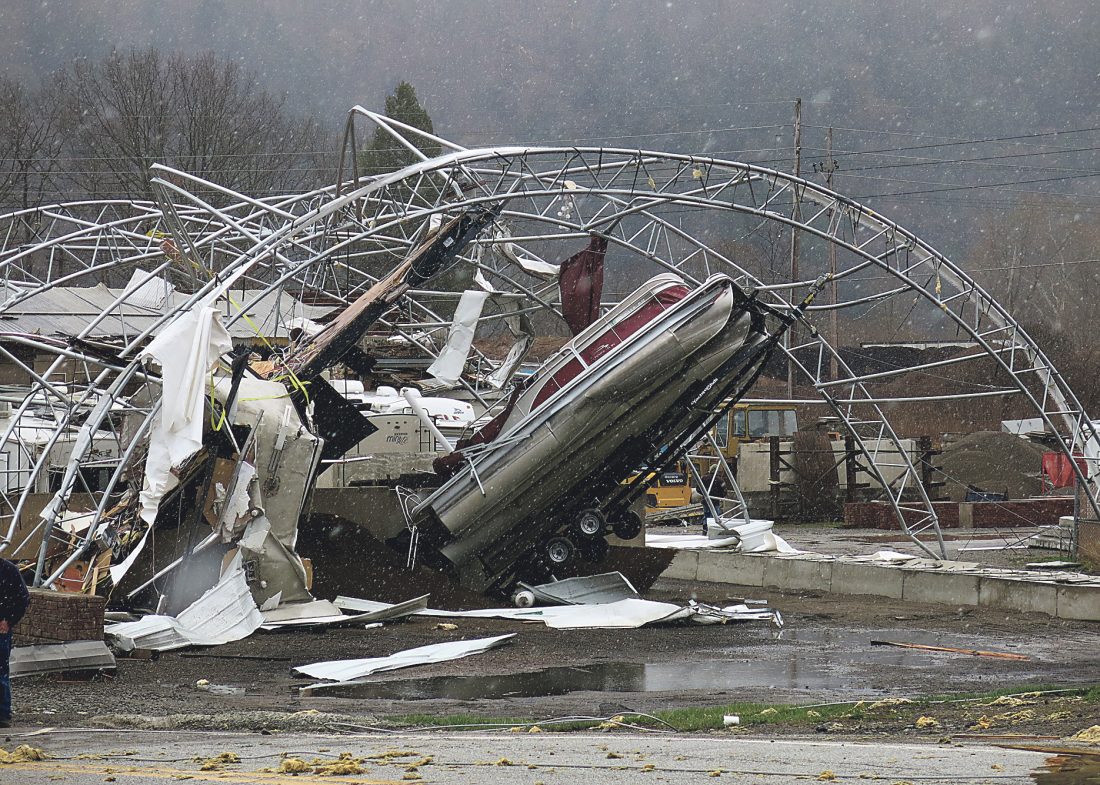 Times Observer photo by Brian Ferry A boat stored in a Whitmire Block building in Starbrick hangs from the rafters Monday after an EF-2 tornado ripped the roof off the building Sunday night.

Sunday’s storm generated an EF-2 tornado that carved up about 16 miles of Warren County, particularly at Carter Lumber in Starbrick.

On Monday afternoon, Warren County officials and visitors from the National Weather Service in State College evaluated the damage left by the storm.

“We’re here to take a look at the damage and try to establish the wind speeds,” Meteorologist Pete Jung said. “This is my first tornado survey in the snow.”

Although Starbrick was their first stop in the county and they had been examining damage for less than an hour, they had no doubt; “We’re going to call it a tornado,” Jung said. 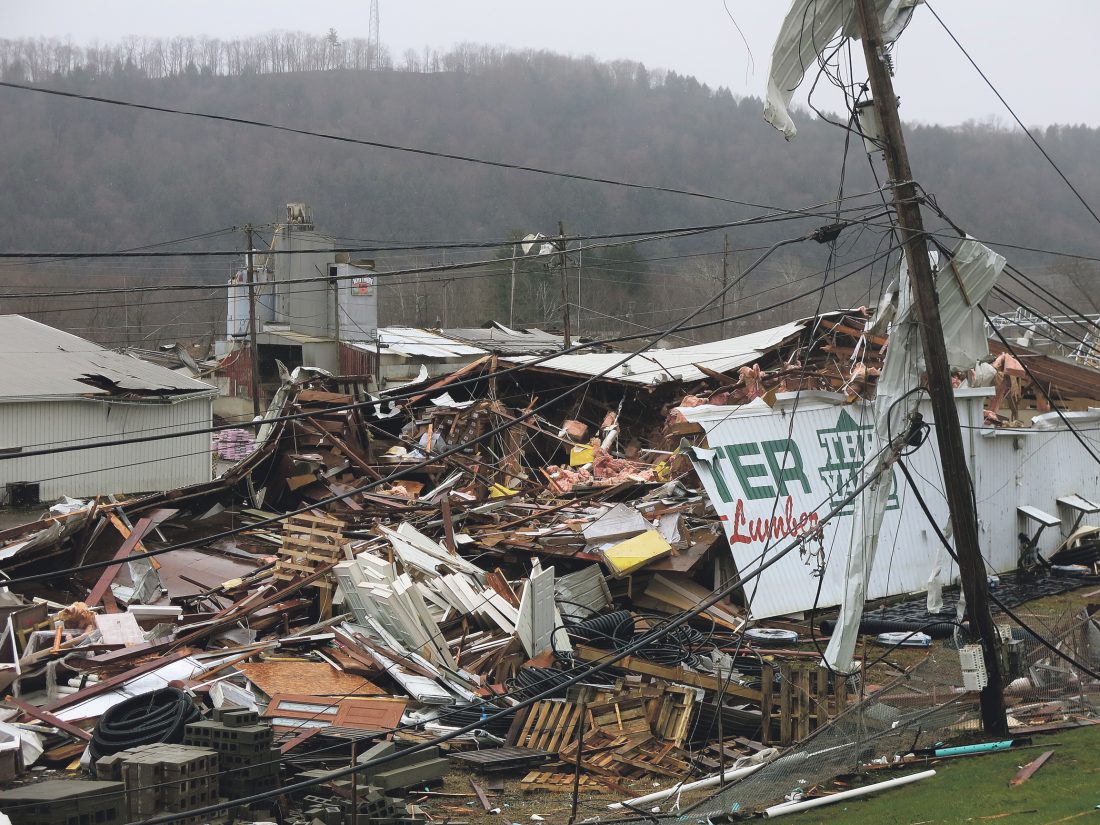 After spending hours in the county, looking over the damage from Pleasant Township through Elk Township, Jung and meteorologist Mike Jurewicz determined there were top wind speeds in the 120 to 130 mile per hour range, which, combined with evidence of rotation, indicates a tornado at the top of the EF-2 range.

That tornado touched down at about 8:18 p.m. in Pleasant Township a little southwest of Starbrick, came down the hill from Lenhart Road, and crossed the Allegheny River.

A number of houses along the eastern end of River Road were damaged. A recent addition to one of those was ripped off and a roof truss from that structure tossed onto the front of the house. Numerous large trees were down in that area, including some that fell on houses, vehicles, and outbuildings.

That end of the road was closed and with all the power lines down.

Two of the four buildings at Carter Lumber, while still standing, were effectively destroyed, and one of three at G&H Oil was demolished.

Portions of the roofs at Carter Lumber were gone or peeled back. Building contents were sent flying. Walls were missing.

A G&H employee who was cleaning up said there seemed to be only minor damages to the vehicles stored in the building.

A manager at Carter Lumber who was surveying the damages said the company would not be giving any comment on Monday.

Jung and Jurewicz spent some time at Whitmire Block, looking over the contents of a fabric building. The roof had been torn off and was spread northward.

“This almost looks like a tornado went right over it,” Jung said at that location.

Insulation material, probably from Carter Lumber, was found as far away as Scandia, according to Warren County Emergency Management Deputy Director Scott Rose.

A piece of a sign or building bearing part of Carter Lumber’s name was found along the Bike Hike Trail in North Warren.

Corrugated metal was hanging in trees and scattered on the ground and along Route 6.

The scattered metal caused Route 6 to be shut down Sunday.

According to Rose, metal was strewn across all five lanes at the intersection with Preston Road, some of it reaching 10 feet high. Crews worked for hours to remove that rubble and make the road passable.

From Starbrick, the tornado continued northeast over the hill, largely skipping over North Warren, before touching down again near Conewango Creek and the northernmost part of the City of Warren.

Jung estimated the wind speeds as the tornado crossed Conewango Avenue at between 80 and 90 miles per hour.

There were, again, numerous houses and vehicles damaged by falling trees.

At its widest, the path of destruction was about 400 yards wide, Jung said.

As the tornado reached the end of its life, the path of destruction in the Scandia area was about 25 to 30 yards wide, Jung said.

The county’s 150-foot communication tower near Roper Hollow was blown down.

The final signs of damage attributable to the storm were seen at Blueberry Hill Golf Course, he said.

In all, the tornado crashed through about 16 miles of the county and was on or near the ground from 8:18 to 8:35. The storm carried it at a speed of about 60 miles per hour.

“It sounds like there were no injuries,” Jung said. “That’s very fortunate.”

Times Observer photo by Brian Ferry A boat stored in a Whitmire Block building in Starbrick hangs from the rafters Monday after an EF-2 tornado ripped the roof off the building Sunday night.