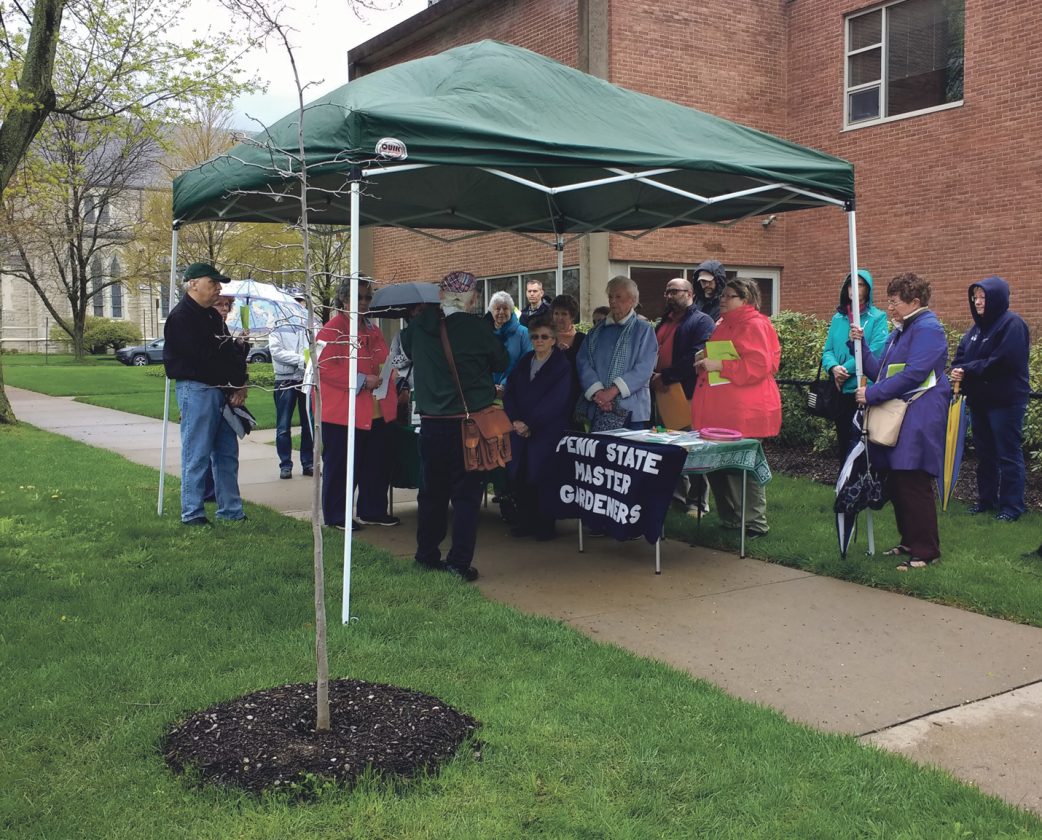 Times Observer photo by Lorri Drumm Members of area groups and organizations and tree-enthusiasts gathered on Friday to celebrate Arbor Day with the dedication of a Black Gum tree in front of Pennsylvania General Energy at 120 Market Street in Warren.

A downpour held off just long enough on Friday for a group of people to celebrate Arbor Day with the dedication of a tree known for its longevity and multi-season display of color.

A Nyssa Sylvatica tree, also known as a Black Gum or Tupelo tree, was dedicated in an official ceremony held Friday in front of Pennsylvania General Energy at 120 Market Street in Warren. The tree was purchased by the Warren Garden Club.

Josie Gerardi, chairperson of the Warren City Street Landscape Committee and Arbor Day Committee, welcomed those gathered for the ceremony. “Warren is known for its beautiful street trees,” Gerardi said. “This is another feather in our cap.”

Following the reading of an official proclamation by City Council Member Paul Giannini, an official Tree City flag was presented. The flag was presented by Cecile Stetler of the Pennsylvania Bureau of Forestry. Stetler noted that Warren has maintained its designation as a Tree City for 31 years. “It’s the second oldest designation in northwest Pennsylvania,” Stetler said.

The Tree City USA program is a nationwide movement that provides the framework necessary for communities to manage and expand their public trees.

Alene Wolf, a member of the Warren City Street Landscape Committee, then told those gathered what the future holds for the new tree.

It is predicted to have a 30-to-40-foot spread and grow to approximately 50-feet in height, according to Wolf. “In May to June it will have white/green flowers, then glossy black leaves,” Wolf said. “Then it will produce a black/blue fruit that will provide food for birds and nectar for bees.”

The tree will transform to a scarlet red color in the fall with some branches possibly having three colors, according to Wolf.