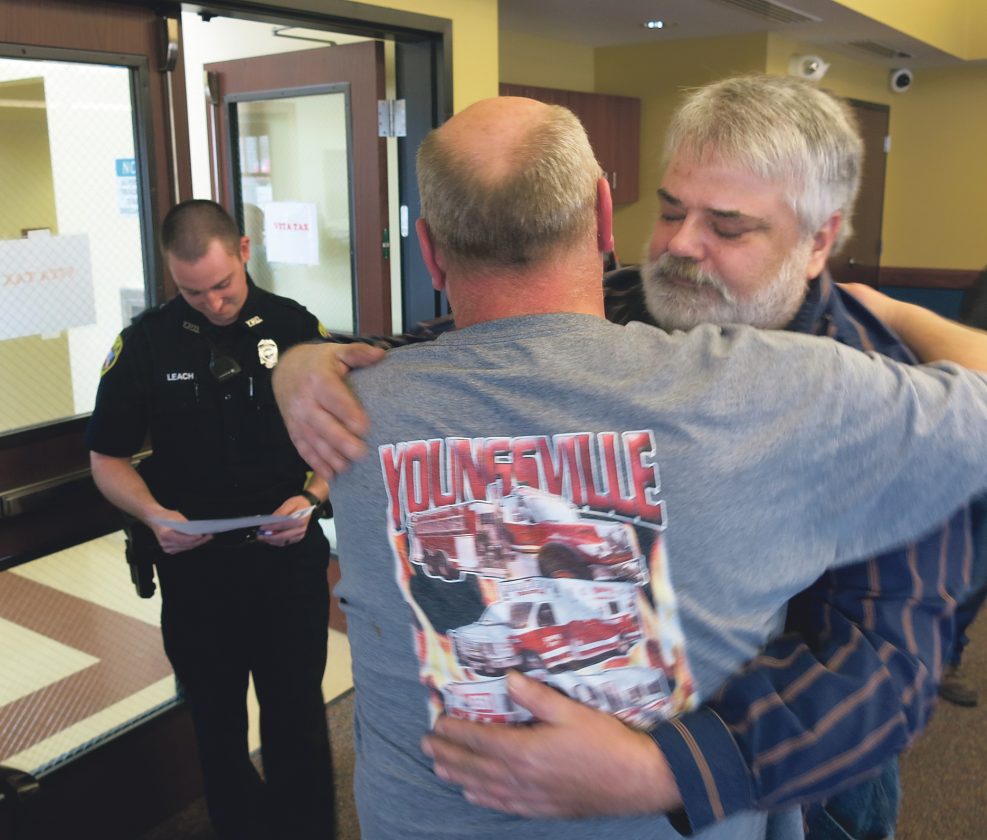 In attendance at Monday’s meeting of Youngsville Borough Council was one man who wouldn’t have been there without the actions of two others.

While council honored Youngsville Borough Police Officer Ben Leach and Youngsville Volunteer Fire Department Chief Vern Edmisten for their actions at an April 3 fire on Robertson Drive, so did the man they brought out of that burning home.

“Without these two guys, I wouldn’t be here,” Richard ‘Zip’ Young said. “You’re looking at two heroes right there.”

When the fire broke out that Wednesday evening, Young was sound asleep.

He said neighbors told him his alarm was going off and they had been beating on the door, trying to wake him.

“I had no idea until these guys showed up,” he said. “These guys had to bust the door down.”

Leach said he was the first at the scene, followed immediately by Edmisten.

He had been dispatched to a structure fire with entrapment. “His truck was there,” Leach said. “I was told if his truck is there, he’s inside.”

“I saw flames coming out through the front door,” he said. “I went around to the back and tried to get inside. Vern was right behind me.”

“The door was locked,” Leach said. “I kicked it in and went inside.”

When he yelled, Young responded. “He said he heard the door go in,” Leach said.

He and Edmisten found Young in the back room and made sure he made it safely out.

“The whole thing happened within about a minute,” Leach said.

The smoke was thick.

“I wouldn’t have lasted much longer,” Young said. “I’d have been a goner. They saved my life, as simple as that. I call them angels among us. You can’t see their wings, but they have them.”

“I got a new lease on life,” he said. “I have another birthday and a lot of plans.”

“It was the act of these two men and their bravery that saved one of our own,” Mayor Scott Nelson said. “Thank you very much for all that you do.”