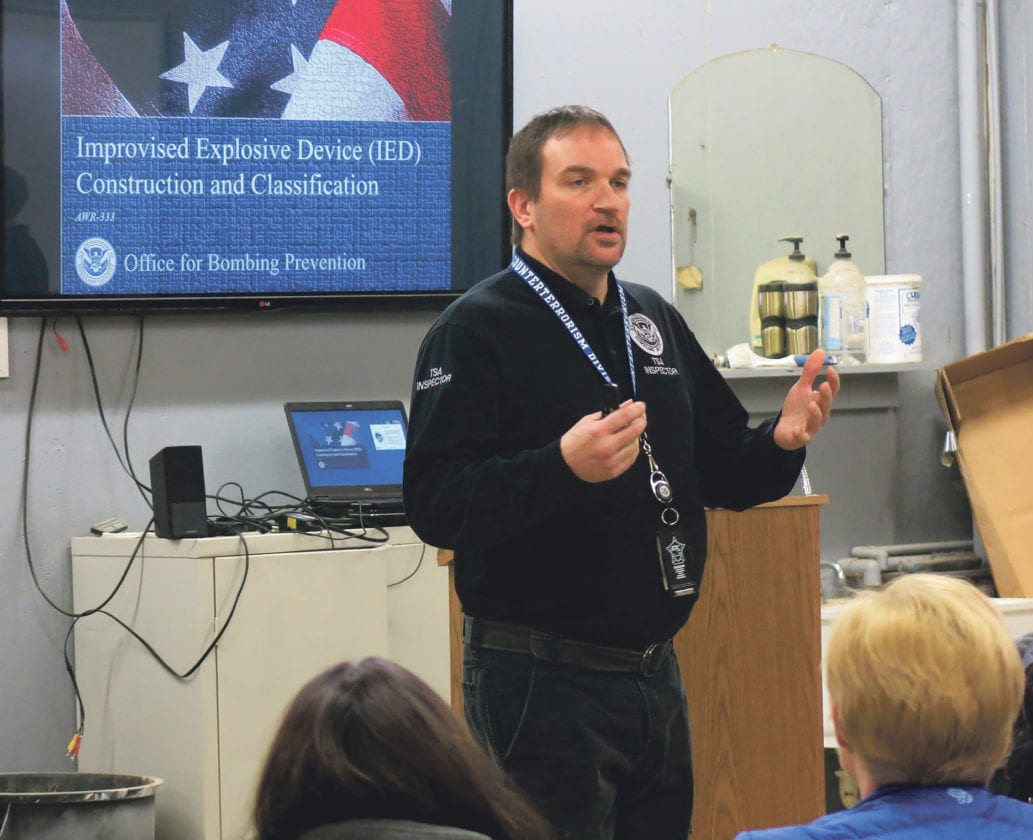 Young people spend a lot of their time at school.

Warren County School District has been spending time training its people and allowing professionals to practice in the buildings to keep those students safe.

Now, another group that sees the students daily is receiving training.

Jonathan Fadzen and Joseph Larkin, Transportation Security Administration inspectors out of the Pittsburgh field office, worked with a group of about 30 drivers Tuesday morning.

One driver said he found a duffel bag on his bus on Monday that had not been there on Friday. But, he also said, the bus was driven by someone for a field trip that weekend.

He found an unfamiliar name on the bag and a phone number with a (412) area code. He said that tipped him off to it being not from his students.

Larkin suggested that drivers who think their lives are in danger call 911.

Otherwise, following protocol and contacting the bus office is a safe way to go when they see something suspicious.

The backpack planted next to a chair during a break in the presentation was quickly identified as out of place by the person sitting next to it.

In the backpack were a sample pipe bomb and a sample pressure cooker bomb.

Larkin made suggestions about what drivers can do if there is an active killer on the bus.

The district does not allow guns on its contracted buses, so drivers were encouraged to be aware of other items at hand that can be used as weapons.

He also advised drivers from stopping at locations where there is an armed person.

“If you can get away, do so,” he said. And don’t go back for items. “You have nothing on you that’s worth your life… that worth you not getting back to your family.”

“If evacuation is not possible, find a safe place to hide,” he said. As a last resort, drivers were advised to gather up weapons and fight. “I’m doing to fight with all–out commitment. I’m going to fight to live.”

“Safety continues to be on the forefront of our minds in everything that we do,” District Transportation Manager Mike Kiehl said. That extends to the time students spend on their way to and from school. “Certainly we’re incorporating our contractors in the training.”

“We’ve offered it to all our contractors,” Kiehl said.

“Anything we can do to make it safer for the kids — for the district,” Warren Bus Lines Fleet Dispatcher Jeff Blair said.

For the time being, “there are no direct threats on transportation,” Larkin said. “We’re trying to be prepared. Don’t be scared. Be more aware.”