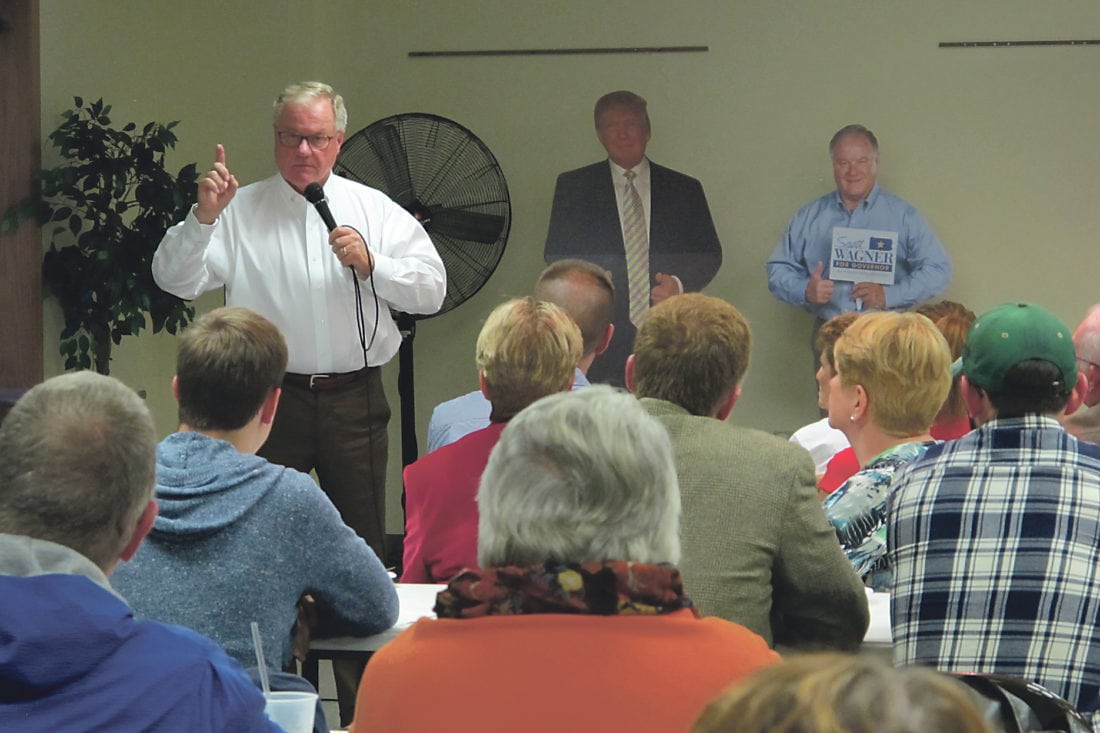 According to the Warren County Young Republicans, the next governor of Pennsylvania visited the county on Tuesday.

Republican nominee for Governor, Scott Wagner, traveled through some severe weather conditions in northwestern Pennsylvania to the Eagles Club Tuesday evening for a meet-and-greet event.

After speaking with individuals and small groups at the event hosted by the Young Republicans, Wagner spoke to the assembled group.

Wagner resigned from his Pennsylvania Senate position he won in a write-in candidacy after receiving the nomination for governor.

“I took my responsibilities as senator very seriously,” he said.

He said he felt he had to run against Gov. Tom Wolf. “I said, ‘I’ve had enough of this guy.”

He said he was “tired of a lot of experiences” he had had with Pennsylvania agencies including the Department of Environmental Protection, Department of Labor and Industry, and PennDOT.

“We need to get these regulatory agencies under control,” he said. “There’s an impression in Harrisburg that you in the independent oil industry are just dumping stuff all over the place. I didn’t see any of that.”

“It’s a very old industry up here and it needs to be supported,” he said.

Farmers, too, need support, he said. “The farmers in Pennsylvania need help, especially the dairy farmers.”

“We have the highest gas tax in the nation,” Wagner said. “I’m ok with that, but I expect really good roads. We have more potholes that we’ve ever had.”

“There’s a lot of stuff that needs to be cleaned up in Pennsylvania,” he said. “Education, to me, is the most important thing for any person.”

Wagner said he would add $1 billion to education spending “without raising taxes” while eliminating “school taxes on your home.”

“Gov. Wolf will tell you how much money he put into education,” Wagner said. “He didn’t sign a budget for three years. He didn’t put a nickel in.”

He said $2 billion “went into schools,” but $1.3 billion of that went into pensions.

He said he is spending time and focusing efforts in Philadelphia. “We have opened up our ‘Democrats for Wagner’ office” in Philadelphia, he said. “The level of poverty in some areas of Philadelphia is just breathtaking.”

Wagner said education could help the state cut down on poverty and the number of inmates in state prison — 48,000.

“If we can start solving some of these issues with education… It’s easier to build a child than prepare an adult,” he said.

He said in order to prepare a new generation of entrepreneurs, it is critical that schools focus on math and English.

Wagner spoke in front of cardboard cut-outs of both himself and President Donald Trump that had been placed there prior to his arrival.

He referred the the image of Trump at one point.

“There have been federal tax cuts,” Wagner said. “He has taken a huge stand behind the military and law enforcement.”

“I think we in Pennsylvania are seeing a lot of good things because of what he’s done,” he said. “I think we’re in a good place and heading down a good path.”

Wagner said he has been to more than 600 events like the one in Warren since he started the campaign.

“What motivates me every day is every single person in this room,” he said. “You are a small Pennsylvania town, but you are just as important as every other town.”

“The Warren County Young Republicans have knocked on between 8,000 and 10,000 doors for this great man,” Jared Villella said in introducing Wagner.

“My gut tells me we are somewhere between down three and up three (points in the polls) because of what the governor’s doing,” Wagner said.

He said his relationships developed in the legislature — including with Rep. Kathy Rapp, who was in attendance, will enable him “to get things done… when I become governor.”