The moment I knew 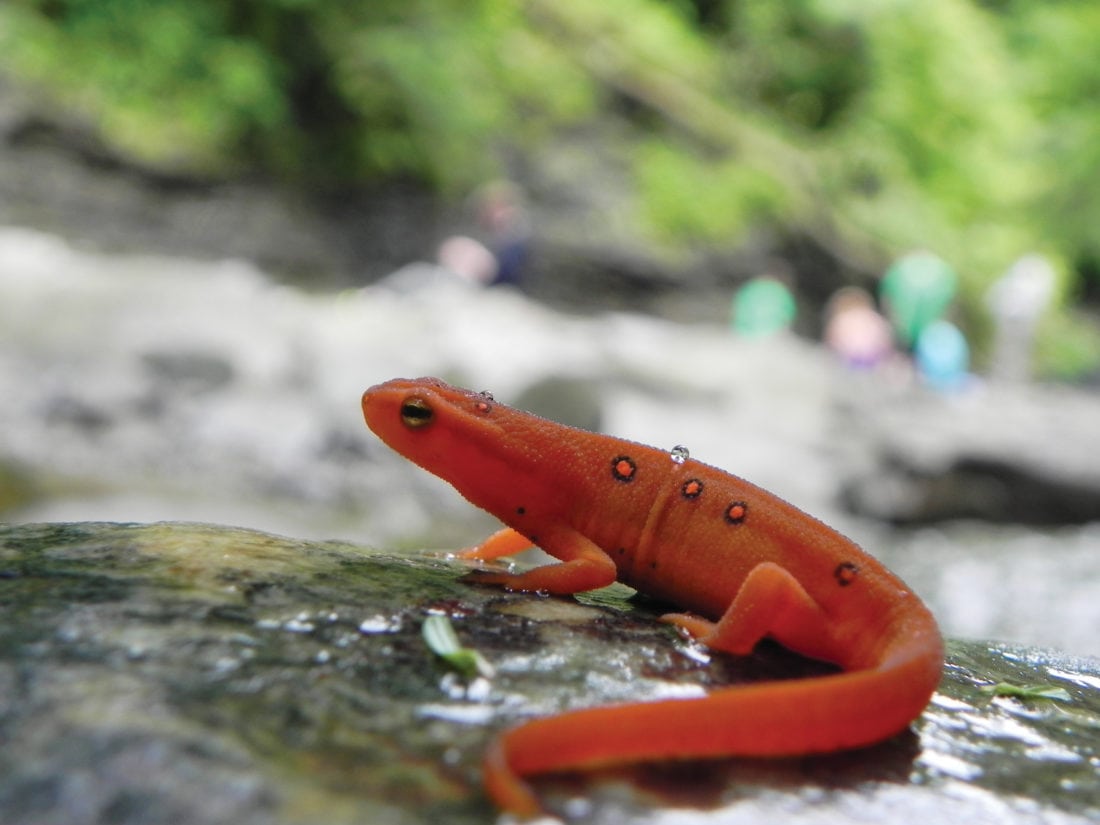 Photo submitted to Times Observer Red efts are known for their bright orange color and black-boardered orange spots along their backs.

Growing up my sister, Clare, and I spent a lot of time catching creatures in the pond behind our barn. We would head out with our pond nets and notebooks and spend the day trying to catch as many crayfish as we possibly could. Most days we would catch a maybe a dozen crayfish and maybe a tadpole or two, but occasionally we would catch something we had never seen before. For me, one catch stands out among the rest.

Clare and I had spent the morning catching crayfish, when I suddenly caught something slimy squirmy and green in my net. At first, I thought the creature squirming around in my net was a tadpole, but as I looked closer I noticed that the creature had four legs and a long skinny body. It looked like some kind of salamander, but I had never seen anything like it before. It was slimy olively-green color and it had two rows of orange dots that looked just like the orange dots that I’d seen on the back of Red Efts.

If you spend much time in the woods you’ve probably seen a Red Eft or two. Red Efts are small, bright orange salamanders that have black spots and two rows of black-bordered red spots down their backs. Red Efts are common to New York State and can be found walking around on the forest floor from late spring until early fall. Unlike most animals that live on the forest floor, efts don’t use their color to blend into the leaves and dirt, they use it to stand out. They secret a toxin called tetrodotoxin or TTX for short. TTX is a nerve toxin that causes irritation and, in extreme cases, paralysis and death to any animal silly enough to eat this little creature. The bright coloration is a warning sign, a message to all predators that this little creature shouldn’t be eaten. Luckily, their bright colors make them easier for children to find too.

Anyways, I knew Red Efts didn’t live in the water, so I ran down to my nature center, a little wooden playhouse that my dad had filled with nets and collection jars, and grabbed a field guide on reptiles and amphibians. I flipped through the book, looking for the olive salamander-like creature with red spots on it’s back until finally I found my answer. It was an Eastern Newt. By the end of the afternoon I had discovered that the Red Efts transform into this little green newt and return to the water to live out the rest of their life.

A few weeks later my younger cousin, Lucy, was over at the house catching things in the pond with us when she caught another Eastern Newt. Again, I ran to the nature center and grabbed my field guide, but this time I already knew the name of this creature. This time I used the field guide to teach my cousin about what she had found. That was the moment I knew I would spend my life teaching people about nature.

The thing about nature is there is always, always, always more to learn about it. Just when you think you know everything about a plant or an animal you see or read something that forces you to question what you know about that thing. That’s exactly how I feel every time I run into a Red Eft.

Last week I was out hiking at Dobbin’s Woods Preserve, a Chautauqua Water Conservancy preserve out in Ashville, when I stumbled upon a little Red Eft waddling across the trail. As I continued walking I ran into more efts, some walking through the leaves while others hid beneath the trees. I ran into seven individuals before I finally decided to stop and watch the little creatures. Their little bodies and the way they moved reminded me of dinosaurs. I continued watching until it started to get dark.

As I started back to my car I stumbled across something I had never seen before, an olive-green Eastern newt walking down the path. As I stopped to watch the newt waddle across the dirt I realized that I still don’t really know very much about the Eastern Newt. Like how long do Red Efts live on land before they return to the water? Are adult Eastern Newts toxic like the Red Efts? When do their colors start to change from that beautiful bright red to that dull olive-green? It was time to do a little bit of research.

After doing some reading online and in field guides I discovered that efts can actually live on land for three to four years before they return to the water as adults. As adults, Eastern Newts are still toxic, but research shows that the toxin levels are a tenth of the amount found in efts. Another interesting thing I learned? When the newt returns to the water it doesn’t grow gills, it still has lungs for breathing air.

Of course, if you’re anything like me every answer just prompts more questions. Let’s just say I’m happy I found a career that makes sure I’m always learning.

Margaret Foley is a naturalist at Audubon.