Jill Kelly, wife of NFL Hall of Famer, shares her story of faith and football 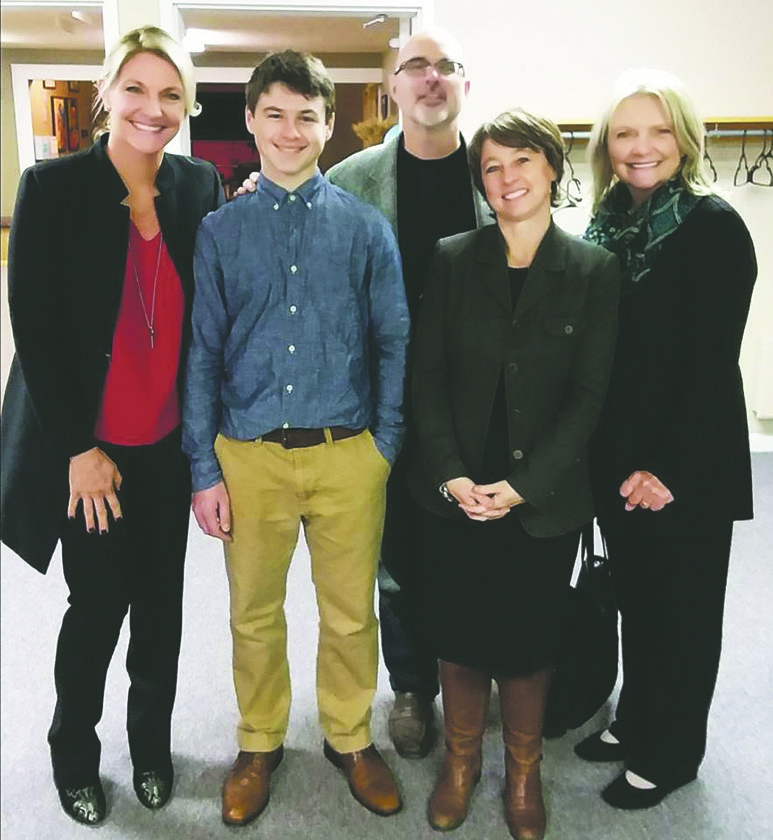 With a combination of quick wit, profound depth, heartfelt emotion and well-timed football references, Jill Kelly gave attendees at Praise Fellowship Church a glimpse of what living life “Kelly tough” is all about.

Jill Kelly, the wife of Hall-of-Fame NFL quarterback Jim Kelly, shared a story — her story — of faith and football during a special event held there recently.

Christin Borger, the event’s coordinator, wanted to bring Kelly to the Warren area after reading her books and hearing Erin, the Kelly’s oldest daughter, speak during an event.

“After Erin spoke at the youth conference, my husband and I had the opportunity to meet Jill,” Borger said. “We talked easily, as if we had known each other for a very long time.”

Borger said she asked Jill to speak at Praise Fellowship and Kelly immediately accepted. It took a few months to get the scheduling worked out, but a date was found that worked for both Jill and the church.

Jill’s ability to connect with people was evident during her short time at Praise Fellowship.

“She was brilliant in how she connected with her audience,” Praise Fellowship pastor Rick Rohlin said. “As she spoke, it seemed like we were best friends talking over a cup of coffee.”

“Jill has encouraged me in my faith and journey,” Borger said. “The emotion she expresses on her pages is raw, it’s real, it’s human emotion. The conversation with her was no different than reading her words spilled on to her pages.

“She is real,” Borger continued. “She is humble. She is kind. She radiates hope… His hope.”

“I have been around quite a few famous people and fame does not impress me,” Rohlin said. “What impresses me is genuine people of character who happen to be famous. Jill Kelly is the real deal. Her relationship with Jesus and her love for people is so genuine and very contagious.”

While there are any number of stories Kelly could share to explain her deep faith, she focused primarily on the events surrounding the birth, life and death of their son, Hunter.

Hunter’s arrival was steeped in anticipation and excitement. Despite his hectic schedule, Jim had been able to attend every prenatal appointment with Jill, all but one. The couple had decided to wait until the birth to find out the baby’s sex. When asked during that one appointment whether she wanted to know, Jill caved. She learned Hunter was a boy and decided to keep that information from Jim until the birth.

Jim retired from the NFL in January 1997, and on Feb. 14, Jim’s birthday, Hunter was born. To say Jim was thrilled to have a son would be a bit of an understatement.

“He was more excited than if he had won the four Super Bowls and 10 more,” Jill said. “His big thing was that he had to call Thurman (Thomas) and brag because Thurman had all girls. He called Thurman, twice.”

Things seemed to be going well as Hunter passed all his newborn screenings and the family returned home.

After a couple weeks, Hunter became irritable and began having trouble eating. The Kellys tried numerous home remedies and routine changes, but nothing helped. Hunter was sent to a neurologist and the day the family received the results is one Jill said she will never forget.

The neurologist then told the Kellys that Hunter had been diagnosed with Krabbe Luekodystrophy, a disease with no treatment and no cure. They were told not to expect Hunter to live to see his second birthday.

“Our life had just ended,” Jill said. “Life as we knew it ended on that day.”

The news rocked the Kellys and Jill said she immediately thought there was no way the “no treatment, no cure” aspect of the diagnosis could apply to Hunter.

“In that moment, I’m like, ‘Wait a minute — This is Jim Kelly’s son. We can go anywhere, we can do anything. There’s got to be something. Right?,'” she said.

Jill said the fact there was no worldly thing able to help Hunter was a driving factor in bringing her to Christ. Had there been something at that time that would have helped Hunter, she would have found a way for Hunter to get it and she likely would not have a testimony to share.

“I’m thankful that was the case,” she said. “At the time, I wasn’t thankful. I was crushed in every way. I was devastated.”

Aside from dedicating her life to Hunter’s care, a full-time job in its own right, Jill continued to try to find something to turn to that would help both her and Hunter. She knew Jim wasn’t going to be able to mount a fourth-quarter comeback this time.

Knowing that Hunter could stop breathing at any moment, Jill said her life was “consumed with fear.” Desperate for hope, she started paying a little closer attention to some of the people in her life. Her uncle, the man who changed Hunter’s oxygen tanks, and a close neighbor were all Christians.

Her uncle would arrive at the house with a bag, which always contained a Bible, a concordance, an abundance of Christian CDs and other Christian items. She said the thing he brought that got her most interested in Christianity was joy. He would share Bible stories and his own testimony, but it was his joy for life that really spoke to her.

“He was just overflowing with joy… It was contagious,” Jill said.

She soon decided to accept Christ in her heart and things changed within the family almost immediately.

“We were treating Hunter like he was dying because that’s what we were told,” Jill said. “When Jesus intervenes, we started treating him like he was living.”

The Kelly home became filled with joy. Even though Hunter was still living on borrowed time, the Kellys began attitude and outlook on life was completely changed.

“As crazy as it sounds, we forgot Hunter was sick,” Jill said through tears. “Hunter needed so much, but he was a reminder of how much we needed.”

Hunter died Aug. 5, 2005, six years beyond his second birthday. Through his suffering, Hunter inspired his parents to create Hunter’s Hope Foundation, a non-profit focused on research on, and providing resources for families dealing with, Krabbe and other leukodystrophies. Hunter’s Hope also advocates for newborn screenings.

Jill said Hunter’s Hope serves as a catch-22 for her. She’s able to see the hope and joy of families who were able to slow or stop a disease through newborn screenings, but she also aches for those who discover their child is bound to suffer the way Hunter suffered.

“We see the joy, but we also see the heartbreak,” she said.

The event opened with lighter fare as Kelly, a western New York native, described the circumstances that led to her relationship with the then-signal caller for the Buffalo Bills.

Jill was invited to attend a postgame party hosted by Jim; he soon began talking with her and as she was leaving asked, “how do I get a hold of you?”

Since it was 1991 with social media non-existent and cell phones few and far between, Jill simply answered, “you don’t.”

Jim so impressed Jill by tracking down her work number, she agreed to start seeing him and the couple has been together ever since.

Jill and Jim have shared their story all over the world and have appeared nationally on television shows including: Fox & Friends, Hannity, Good Morning America, The Today Show, CBS This Morning, The Discovery Channel, The 700 Club, Oprah, ESPN, Fox Sports and others.

The Kelly family has also been invited to share their story via numerous speaking engagements.

“I have heard and been with some of the best speakers in the world,” Rohlin said. “I can absolutely say with confidence that Jill Kelly is on a very short list of the best I have heard.”

Jill is also a New York Times best-selling author and agreed to meet with attendees and autograph copies of her books following the event.

“She took almost two hours to sign books after the event,” Rohlin said. “She spent time with each person, listening to their stories — crying, rejoicing and praying with them as they hugged and took pictures.”

Rohlin is hopeful Jill will have a return engagement at Praise Fellowship, potentially with more of her family.

“We certainly hope to host her again soon,” he said. “It’s possible that we may be able to have Jim with her next time or one of their daughters.”