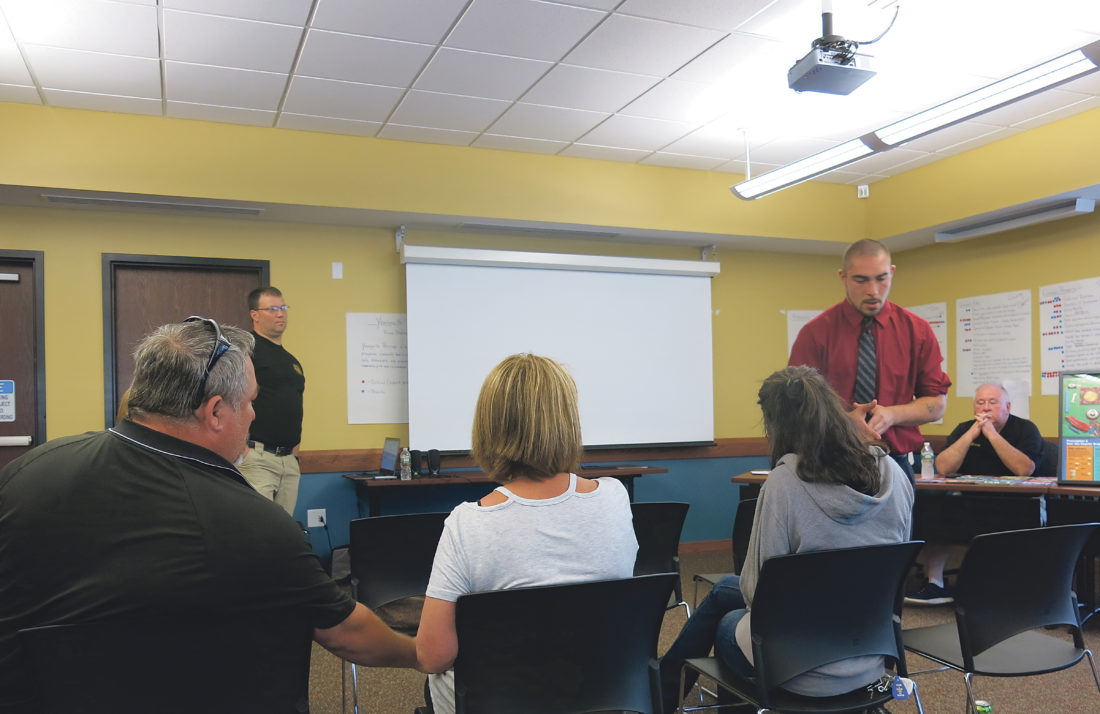 Representatives from local agencies were on hand Thursday at the Youngsville Borough offices to bring awareness of drugs in our community.

The event was one that Mineweaser said had been identified through the course of strategic planning meetings as one that was of great interest and importance to the community. Unfortunately, Mineweaser said, it is often the case that people want the information, but not until it’s become a crisis in their own families.

While the turnout wasn’t high for Thursday’s event, Mineweaser is hopeful that a continued effort on the part of local agencies to educate as well as to enforce would raise interest among county residents. The reason Mineweaser said he wants people to be more aware of the drug situation in the county is because, whether they know it or not, it does affect them.

To that end, Mineweaser said he invited people from the community with whom the Drug Task Force has had contact.

Anthony Pollaro spoke to the group, which included a handful of community members, about his struggle with addiction. The story he had to tell was compelling, and concerning.

Pollaro has had a significant run with addiction, including an episode in which he overdosed on heroin and physically died and was revived by Narcan on the way to the hospital.

According to an April 29, 2016, Times Observer article, “officers were dispatched on March 21 for an unresponsive male, Pollaro, in the upstairs bathroom of a Warren residence. There, police said, they spoke to two males living in the residence who reported that Pollaro had been a recovering drug addict for nearly nine months and that they believed Pollaro had relapsed.”

Pollaro had relapsed, after being given two stamp bags of heroin in exchange for a ride to a gas station.

Pollaro, during his presentation to the group on Thursday evening, talked about the ways in which addiction caused him to behave. In essence, what Pollaro described was a compulsion to seek and obtain drugs during “active” periods of addiction indiscriminately of who he needed to remove as an obstacle to obtaining them, or how he needed to do it.

Part of Pollaro’s recovery, he said, includes working two jobs — staying busy, and doing his part to educate people on addiction and the drug issue in the community, at the request of Drug Task Force representatives.

While Warren County may have a reported zero deaths as a result of heroin overdose, that’s not an accurate representation of the heroin situation in Warren County, said Forest-Warren Human Services Executive Director Mary Kushner. District

District Attorney Rob Greene agreed, stating that sometimes people are taken out of the county for treatment before they die of an overdose, and sometimes coroners aren’t reporting overdose deaths as specifically heroin-related because toxicology reports are showing multiple substances in the deceased’s system at the time of death. It’s too close to call as to which substance specifically was responsible for a death.

And sometimes, as in the case of Pollaro, the deceased is brought back to life through the use of Narcan.

But whether or not there is an actively addicted person in someone’s family, said Mineweaser, Pollaro’s story clearly illustrates that the drug issue _ a social issue in Warren County — is everyone’s problem.

Addicts are happy to target anyone they can in their search for drugs, said Klakamp, even going so far as to read obituaries for keywords that indicate a home will be empty and likely to contain drugs.

“Education is the key,” said Mineweaser.

It’s important for everyone to educate themselves on what’s out there, what to look for, and what to be aware of. Keeping kids on paths that don’t have a terminus in addiction, said Mineweaser, is how law enforcement is focusing on addressing the issue, along with targeting dealers and trying any way they can to get addicts the help they need.

In the end, Mineweaser said, it all comes down to everyone being aware and participating in the fight any way they can.

Plans to continue presenting drug awareness nights are ongoing, and law enforcement is always willing to present informative sessions at the request of a group, a family, or an individual.