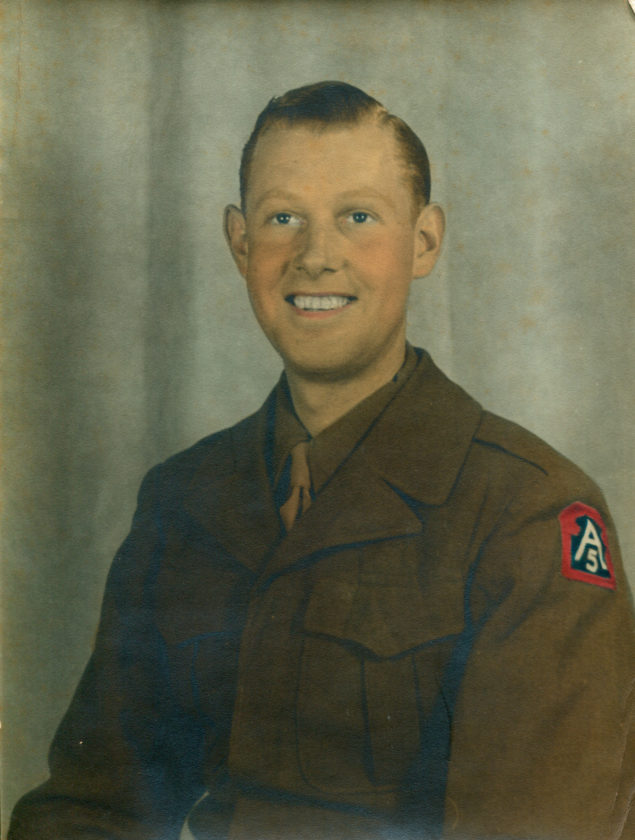 Jay Loomis gets choked up talking about his father’s stories from the service.

He listened intently on the rare occasions his father talked about World War II prior to his passing, and Jay recalled the name of a buddy his father had served with.

With Harold J. Loomis, Sr. having served as a cannoneer in the U.S. Army during World War II, Jay was trying to swap their father’s war stories with the son of Charles Mason.

When he found a phone number from where Mason had lived in Yakima, Wash., he called it.

He got Charles Mason himself.

That, in itself, gave Jay chills.

“In talking to Mr. Mason, I was crying,” said Jay.

“‘Did your dad ever tell you how he got wounded?'”

“‘He left the fire pit one day… When he was outside of the fire pit, a German shell came in and got him in the hip,’ and Mr. Mason said, ‘it took four of us to hold him down.'”

“Mr. Mason said they all loved him and he was a great guy,” said Jay, holding back the tears.

A son getting even closer to his late father through a phone call.

Jay has since shared a photograph with Mason — a photo with the words, “Dirty Dozen,” written on the back of it. It was his father’s artillery division.

And he knew the stories.

Pfc. Harold J. Loomis was drafted into the Army in December 1942, right off his parents’ farm on Paige Hollow Road.

He was a bit on the older side at 25, but “had never been away from home from Sugar Grove.”

“He was stationed in North Africa, then to the Italian campaign,” said Jay of his father, whose funeral display case included a Combat Infantry Badge and a Purple Heart for being wounded in battle.

“Dad started off in Infantry and they found out he was a farm boy and dealt with horses so they made him Artillery. Horses commonly carried artillery and supplies in WWII.

“He was there for the duration,” said Jay. “I think most of the photographs are from Italy.”

Jay doesn’t have many stories, because his father didn’t go spouting off about the war… but what he did say carried weight.

Jay was the closest sibling to his father in that regard, he said, as he was also later drafted only to fail the physical.

His dad’s stories started with the troops shipping out of basic training to North Africa, “and he hung over the railing all the way over.

“We were fighting the Germans in North Africa… then we went up and invaded Italy,” said Jay. “Churchill wanted to attack the soft underbelly of Hitler.”

The Battle of Monte Cassino (also known as the Battle for Rome and the Battle for Cassino) was a costly series of four assaults by the Allies against the Winter Line in Italy held by Axis forces during the Italian Campaign of World War II. The intention was a breakthrough to Rome.

Between January 17 and May 18, 1944, Monte Cassino and the Gustav defenses were assaulted four times by Allied troops, the last involving 20 divisions attacking along a 20-mile front. The German defenders were finally driven from their positions, but at a high cost. The capture of Monte Cassino resulted in 55,000 Allied casualties, with German losses being far fewer, estimated at around 20,000 killed and wounded.

It prompted a vivid letter home to his parents (see below):

Of the stories he’d tell Jay, one hit home.

“The incidents he told me about being overseas?” said Jay. “The corporal came up to him when he was laying on his poncho (as a pillow) and said, ‘Hey, Loomis, get up, you’re on guard duty.’ So dad sat up and he said he heard a German shell go off maybe a block away. He said he went to grab his poncho and it was gone… and his exact words were, ‘I found it maybe 10 feet away, and when I picked it up it looked like a screen door.'”

“He carried that shrapnel in his hip until the day he died. It was never removed,” said Jay. “He had more guts than I’ll ever have, believe me.”

Loomis witnessed soldiers die around him as a loader of an M155 Howitzer.

“He said they were called for a fire mission one day and they would always keep the guns loaded,” said Jay. “The lanyards just barely touched the ground… The whole gun crew goes running out and one of the guys stepped on the lanyard. Of course, it being loaded, the gun went off and the recoil knocked that poor guy15 feet and they never saw him again.”

Jay could see in his father’s eyes that he knew he was just doing what he felt he had to do.

And that his father was proud of that.

But he was still a 130-pound farm boy from rural northwestern Pennsylvania.

“He helped operate the ‘155’; that was it,” said Jay, “then basic camp duties. He said he always felt bad they got to ride (and not walk). They would be riding along and the infantry would be walking along the sides of the road and dad always felt sorry for them them. They would dump off their five gallon water cans for them because they couldn’t carry them.”

During basic training in Texas, Jay remembers his father singled out a man he always remembered.

“He thinks he had $1 in his pocket,” said Jay. “He stopped at a restaurant to get a cup of coffee; he said there was this big old Texan with a big hat, bought dad dinner and may have even taken dad back to the base. He remembered that… because the guy was so nice to him.”

But there were other stories.

“They would have to crawl under barb wire in basic training with live machine gun fire…. The machine guns would be locked to fire just above the barbed wire… Dad said they were crawling through it… and one of the guys raised his head.”

They had to be scared, but they knew what they had to do and they did it.

“You’ve got to be proud of somebody like that… a skinny farm kid from Sugar Grove, Pennsylvania, winding up in Rome,” said Jay. “It was just a different mentality. You were expected to do it, and you did it. I’m glad he’s being recognized, because there are so many people from then who are not recognized.

“Being in the Army, taking part in it, I think I remember him saying they were the best years of his life,” said Jay.

Standing side by side with his buddies, fighting for each other’s lives.

For Jay, it’s been a lifelong privilege to get to know one of those war buddies.

That skinny Sugar Grove farm boy was the breach loader of the M155, and Mason fired the gun.

But they were side by side.

World War II was the largest armed conflict in history, spanning the entire world and involving more countries than any other war, as well as introducing powerful new weapons, culminating in the first use of nuclear weapons. In total, World War II produced about 50 million deaths, more than any other war to date.

Upon Germany’s defeat, it altered the political alignment and social structure of the entire world.

“They were just glad to be home,” said Jay of his father and father’s buddies. “One more week he’d have been in Germany.”

Harold J. Loomis, Sr. went on to be married for 58 years and raise a family.

But, oh, what he had so many others had to endure. And some lived to tell about it.

“I swear to God I see my dad on the back of one of those tanks” in the Ken Burns’ series “The War,”‘ in a part about the liberation of Rome,” said Jay.

Monday morning a little after ten now. This morning is a little cool and it’s been this way for several days. Here is a little more about Cassino. The Censor says it’s Okay to write about that battle. Most of what I can write about the reporters have written. Those correspondents had lots of material out of that, for Cassino was pretty touch.

As you know the town itself sits on the side of a mountain and is across a valley with a river in front of it. I sometimes wonder how the dough feet ever crossed it. (They did only at night). Being in the artillery I could see it and did see it for plenty of days. So near and yet so far. The going was tough there, all the way. But it was really tough after they bombed the Abbey on Monastery hill. The Germans were in there before the bombing but our bombs were so good they had to send for reinforcements to hold it and they made it even stronger. Into Cassino itself we fired lots of rounds and made rubble out of the town. But the Heines learned from the Russians at Stalingrad to make a real fortress out of places like that. They did! Our troops fought through, inch by inch, rock by rock. It was a real slug fest with the Germans determined to hold.

I couldn’t really say why it wasn’t taken, and I know you are wondering. We do hold most of the town. It was just that it was pretty much awful up there, and I guess it really wasn’t worth it right then. Anyway it’s over now, and Cassino, I know, will be one for the history books.

The thing I’m so proud of is the way we stuck it out there and gave them back a lot more then we had to take. There’s an awful lot of (people) that won’t bother us when we start to Berlin again.

Things are rocking along in the same old one-two. We do get to see a show now and then, still get our PX and an occasional coke. Irving Berlin’s show “This is the Army” is here and I hope to get to see it.

Well, I guess this is all I have at this time. This is the longest letter I’ve ever written and since there’s nothing more I’ll close.