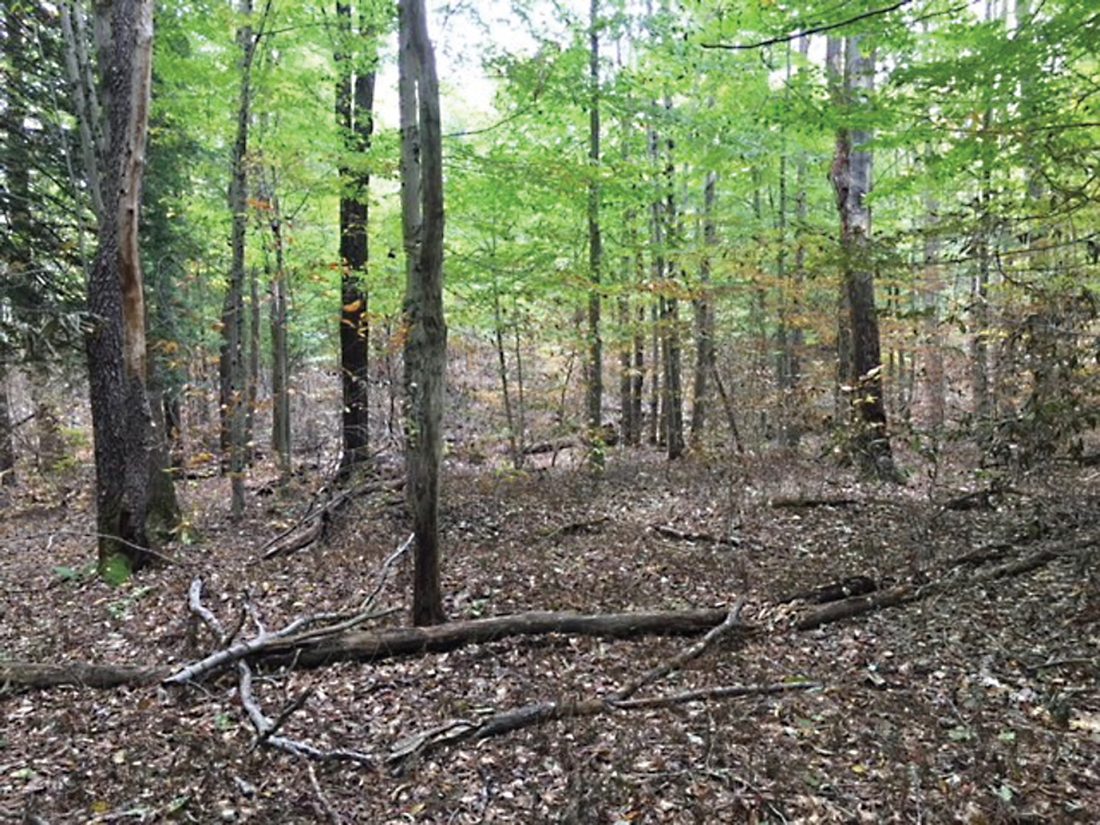 Photo submitted to Times Observer Cerulean Warbler treatment area after the spraying for the invasive herbaceous and woody vegetation. A distinct line can be seen where the spraying was completed. While the landowner (Vinnie Marold) was concerned about the use of the chemicals on the property, he understood that a temporary impact is far outweighed by the long-term benefits.

When he was young, Marold wanted to be a forester, according to a release from the conservation district. “Life took him in a different direction, but now he is returning to his dream.”

He now owns 220 acres of forestland in Cherry Grove Township and another 50 acres in McKean County.

“Vinnie always wants to do the best for the land and has educated himself through self-study and attendance at conferences and meetings,” according to the conservation district. “One of his greatest concerns now is protection of the ash trees and he has even invested in inoculating trees on his property in hopes of saving them.”

Marold has been working with the U.S. Department of Agriculture’s Natural Resource Conservation Service (NRCS) to help improve his lands since he approached the agency in 2015 about a forest management plan for his properties.

Funding for that plan came through in 2018. The objectives include: improving the health of both the forest overstory and understory, rehabilitating stands from past timber sales; enjoy the aesthetics of the property; provide riparian habitat; promote mammal habitat and habitat for songbirds, woodcock, ruffed grouse, and turkey; and “create a family legacy to pass on to future generations.”

That work became part of the management plan.

“The goals of the plan lined up with Vinnie’s goals for the property, and he decided to move forward with a federal contract to help with completion of the projects,” according to the conservation district. “Each of the planned practices are aimed at controlling noxious and invasive herbaceous and woody species and opening up the forest canopy to allow the healthy, desirable trees to continue to grow. The planned practices will enhance the Cerulean Warbler habitat and benefit the overall health of the forest.”

For the cerulean warbler, gaps will be created in the canopy in that area to improve habitat.

“In the time that he has been working with NRCS, it has been evident that Vinnie cares for the land and trees, and the wildlife that call it home,” according to the conservation district. “While a lot of work has been done in Vinnie’s woods, this is just the beginning. Vinnie has a long-term vision for the property: to enhance and protect it and to pass it on to future generations in better condition than when he started.”