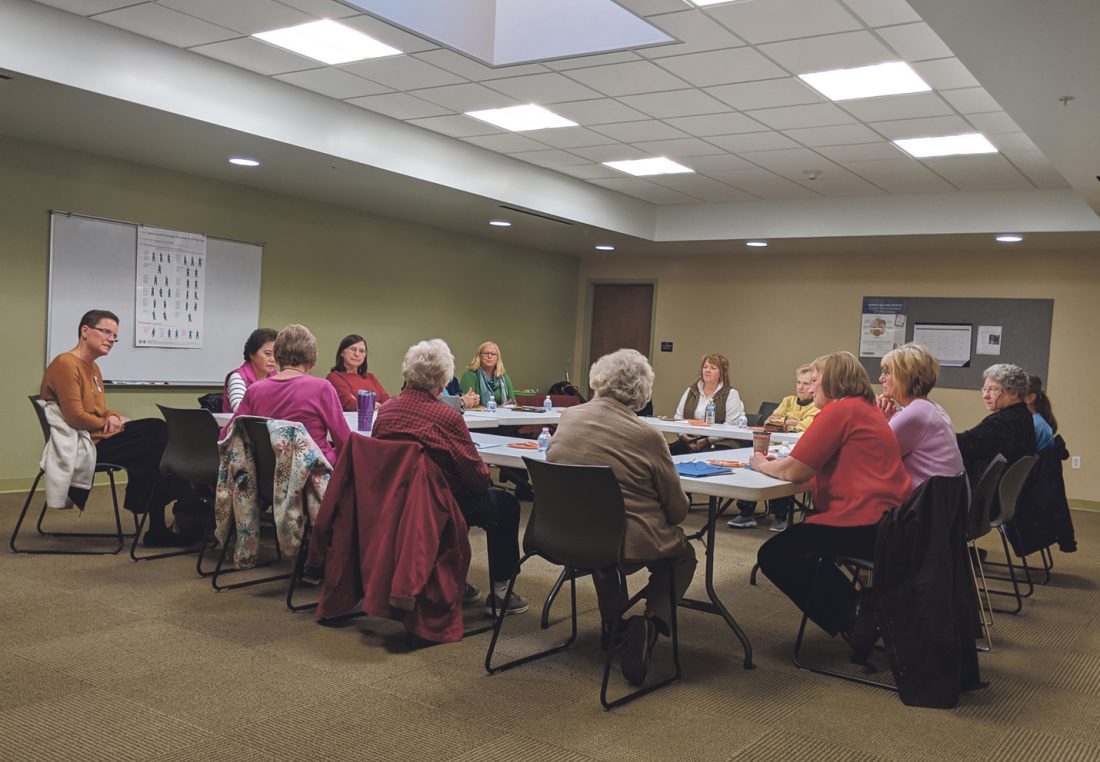 Times Observer photo by Lorri Drumm A group of women with expertise in keeping active in the community shared that expertise with some widows as the last workshop in a series called “Going Solo.”The free workshops were sponsored by the Schorman Center, Hospice of Warren County.

A group of women gathered at the Allegheny Community Center this week to learn about ways they can fill the hole left when they lose their “significant other.”

Tuesday was the final of four free workshops sponsored by the Schorman Center, Hospice of Warren County in a series called “Going Solo.” The title of Tuesday’s workshop was “Social Activities.”

The new series of four group workshops focused on everyday living for the “newly single” (those people whose spouse or significant other has recently passed away), according to Jodi Bevevino, bereavement coordinator and compliance officer.

The new series of workshops were held at various locations every Tuesday in November. Schorman Center grief counselors chose the topics based upon their experiences with past clients who expressed anxiety when faced with tasks that had always been done by their partner who died or who were faced with situations not encountered when part of a couple.

The Schorman Center partnered with community members with expertise in each workshop topic. People could register to attend one or more of the workshops. The Workshops were free of charge, as are all grief services offered by the Schorman Center. Each workshop included some sort of “take away,” be it a meal, a checklist or an activity pass.

On Tuesday, women heard from representatives of local organizations, agencies and churches, each offering ideas of ways to take that first step and get active in the community. Workshop participants heard about everything from reading to children at the Jefferson DeFrees Family Center to line dancing at the Community Center and a myriad of volunteer opportunities throughout the community.

Schorman Center Grief Counselor Ellen Scalise told those in attendance that it’s common to be uncomfortable trying to get into any sort of socialization when you’ve become used to being part of a couple. “It can be difficult, sad and even uncomfortable,” Scalise said.

She suggested the group of women “think about the time before they were married.” “How did you make friends?” she asked. “Wherever you met people, similar interests got you there.”

“Think about what you did together. What’s missing?” she asked. “It won’t be the same but we can fill the hole. You just need to take that first step.”

Tuesday’s gathering gave Kimberly Slocum the chance to let the women know what the Warren County YMCA has to offer that can “get endorphins flowing.” Slocum is youth and family coordinator, marketing coordinator and grant writer for the YMCA.

“Think about your talents,” Slocum suggested. “Maybe you play the piano, like to read or maybe you want to be an instructor. There are needs out there.”