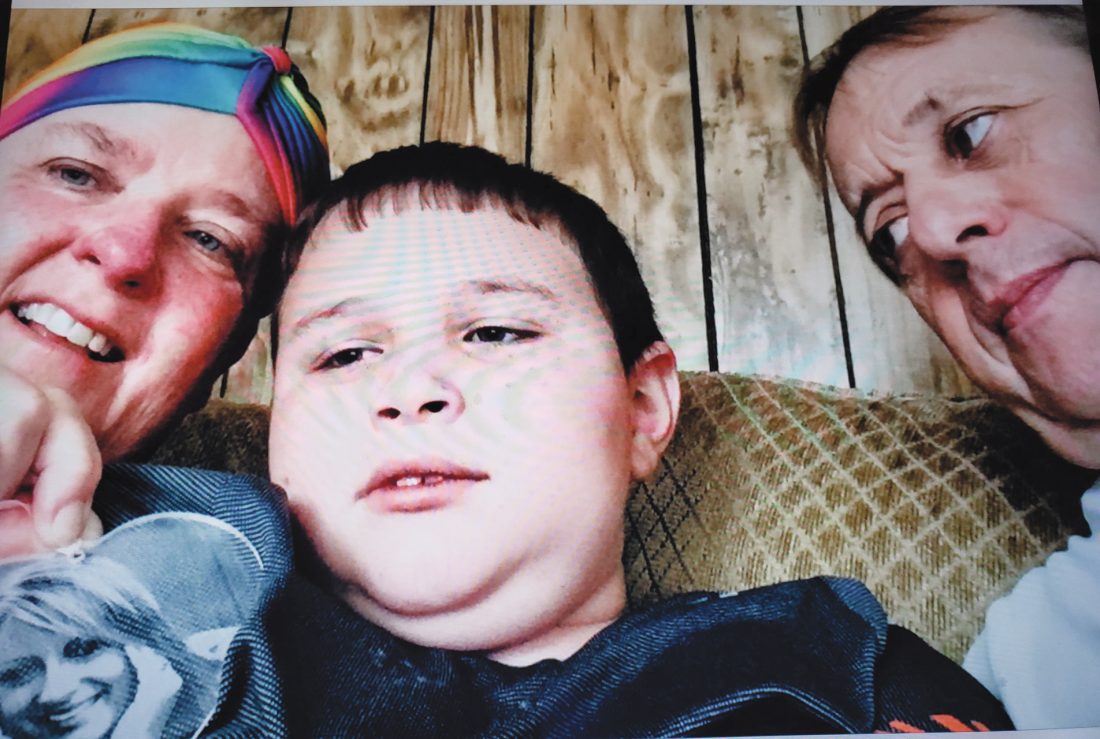 Photo submitted to the Times Observer From left are Joan Reist, her son, Peyton, and husband, Bob. Joan is holding a photo of their late daughter, Casey, who was killed when her car collided with a tractor-trailer tanker in North Warren in 2008. Joan was diagnosed with breast cancer in May. A benefit will be held for her family on Thursday, Oct. 24.

Joan Reist says she believes, “God only gives us what we can handle.”

In a little more than 10 years, she and her family have “handled” the sudden loss of a daughter she was very close to. Now they are “handling” a battle with cancer.

Joan was diagnosed with breast cancer in May, which led to a mastectomy.

“They found two different types of cancer in my tumors,” Reist said. “That meant a year more of chemotherapy.”

Where there’s a will, there’s a way. She and her family have the will to wage the battle, but they could use some help to win the fight. The cost of travel, medical treatments, lost days of work, and associated expenses add up quickly.

A spaghetti and meatball benefit dinner will be held from 4 to 6:30 p.m. Thursday, Oct. 24, at the Hessel Valley Lutheran Church, 166 Hessel Valley Road, Chandlers Valley. The cost of the dinner is a donation. Takeouts are available.

If you would like to donate, but can’t attend, donations can be sent to Hessel Valley Lutheran Church, 166 Hessel Valley Road, Chandlers Valley, PA 16350. Checks may be made to HVLC with “Joan” written in the memo.

All proceeds will go to help offset medical costs.

Joan is receiving treatments in Warren, but they have “traveled to Roswell.” Roswell Park Comprehensive Cancer Center is a cancer research and treatment center in Buffalo, N.Y.

“I get chemo on Thursdays,” she said. “After that, my counts really drop. Weekends are rough.”

Her next cycle of treatments will be for 12 weeks in a row.

“Then they’ll recheck,” she said.

Her doctors predicted her year of chemo treatments would be done by October 2020.

In the meantime, some of the daily activities most people take for granted have had to change in order to protect Reist’s immune system. Her desk in the Boy Scouts of America Chief Cornplanter Office was moved back.

“People come in and ask why I’m back here in the corner,” she said. “I have to try to avoid germs.”

She said everyone at the office has been very supportive. She’s had to cut back her hours. “Most of the time I just can’t come in until Tuesday after I’ve had chemo,” she said.

Her 10-year-old son, Peyton, has been adjusting to homeschooling, also to avoid exposing his mom to illness. The Reists, who celebrated their 39th wedding anniversary in September, adopted Peyton as an infant in 2009. At the age of three, he was diagnosed with autism spectrum disorder.

“He has always seen things as black and white,” she said. “So, for the first time, he struggled with why my mom and why can’t this just be black and white, an easy fix.”

Peyton misses his friends and after-school activities, Reist said. “Once this is over, we can put the wall back down.”

It’s not in Reist’s nature to watch her child be sad or disappointed. Peyton’s arrival in their lives seemed like a divine gift, according to Reist.

“In 1990, we adopted our daughter, Casey,” Reist said. “She was six weeks away from graduating (high school) when she was killed.” Her car collided with a tractor-trailer tanker in North Warren in 2008.

“Casey and I were very close so we had talked about how I felt I could never go on if something would happen to her,” she said. “As the amazing daughter she was, after the accident my angel went straight to work.”

“Before I could catch my breath after such a shock, a very special person had heard what happened,” she said. “He knew of a young girl who needed a home for her unborn child and wondered if we would consider adopting him.”

“For us, we knew the miracle of having (Casey) in our lives, so of course, we said yes (to Peyton),” she said.

“I’ve been very lucky to have such great kids and the support of family and friends,” she said. “Sometimes things don’t always seem fair, but I remind Peyton that when we lay down at night, we should pick out the good things that happened in our day and let the bad go.”