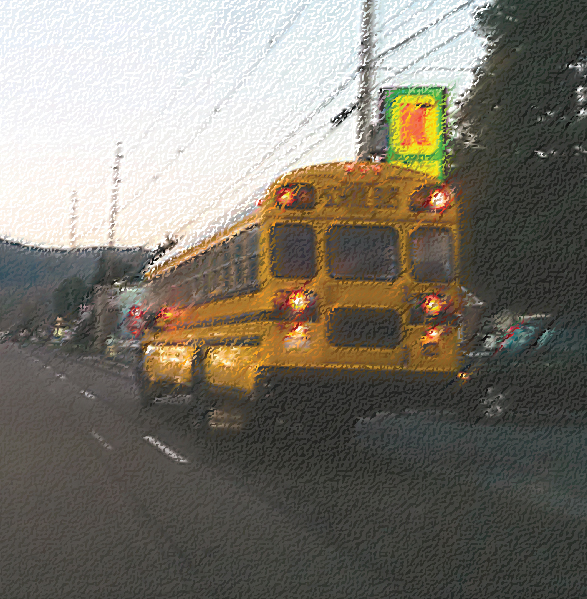 Times Observer file art The above image shows a WCSD bus with flashing red lights and stop sign indicating that all traffic is to stop while students get on or off the bus.

More than a month into the school year, many motorists are accustomed to seeing school buses during their daily commutes.

But, PennDOT, local police, and Warren County School District are working together to make sure that familiarity does not breed complacency.

Next Wednesday, Youngsville Borough Police, City of Warren Police, and Pennsylvania State Police will work with the district on Operation Safe Stop.

“Operation Safe Stop is an event designed to increase awareness of drivers when they are around school buses and stress the importance of stopping for the bus’ flashing red lights,” district Transportation Manager Mike Kiehl said.

“In Pennsylvania, it is illegal to pass a school bus when its red lights are flashing and stop arm is extended,” according to PennDOT. “If convicted of breaking this law, you could get a $250 fine, five points on your driving record, and a 60-day suspension of your license.”

“The National Association of State Directors of Pupil Transportation Services (NASDPTS) reports that there are over 17 million stop-arm violations annually,” Kiehl said. “That is a staggering number, made even more alarming when one considers the potentially life-altering consequences of this dangerous behavior. The Warren County School District asks that drivers please be vigilant when driving near school buses, as the safety of students is a priority.”

According to PennDOT, “It’s easy to get frustrated if you are behind a school bus as it makes a dozen stops to pick up students — especially if you are already running late. But, adding a few minutes to your commute should be a small price to pay for the safety of the more than 1.5 million students transported daily in Pennsylvania.”

“As part of the law, motorists are required to stop at least 10 feet away when behind the bus, meeting the bus, or approaching an intersection where a bus is stopped. Motorists following or traveling alongside a school bus must also stop until the red lights have stopped flashing, the stop arm is withdrawn, and all children have reached safety,” according to PennDOT. “It’s important to note that if physical barriers such as grassy medians, guide rails, or concrete median barriers separate oncoming traffic from the bus, motorists in the opposing lanes may proceed without stopping.”

The following pleas were entered before Judge Gregory Hammond during change of plea proceedings on Monday at the ...