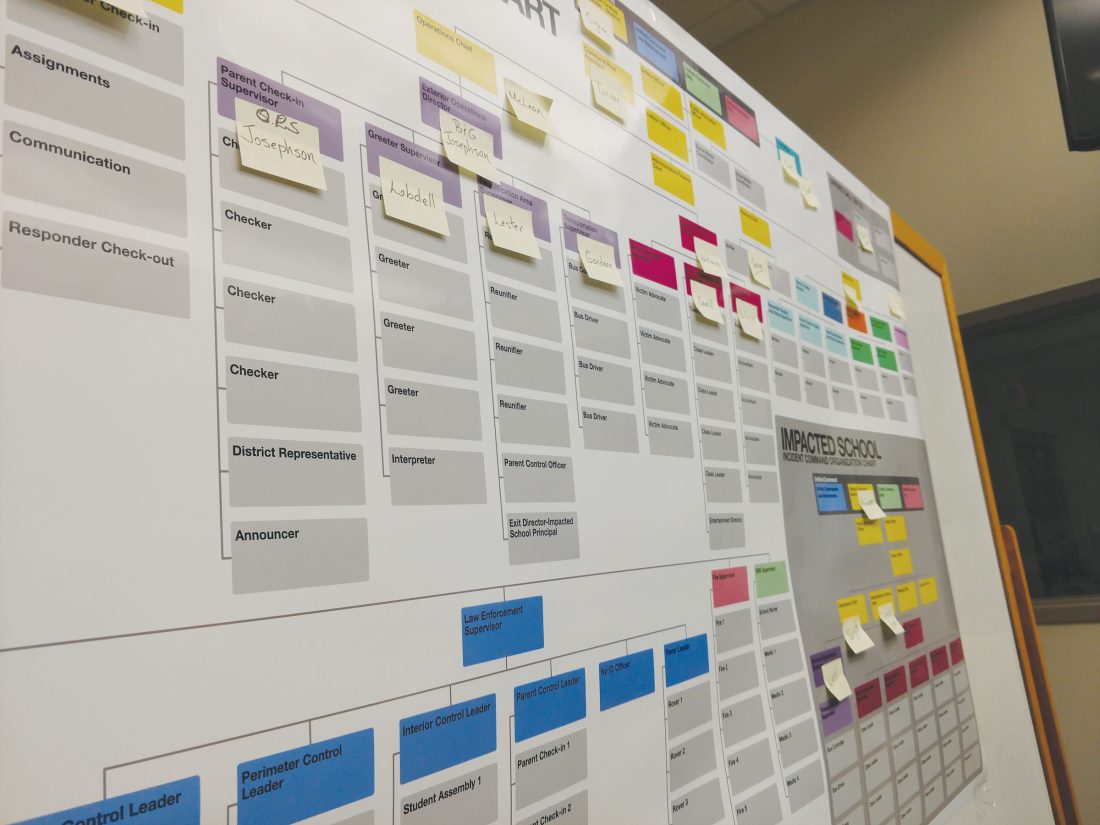 Times Observer photo by Brian Ferry Warren County School District officials are working on a reunification flow-chart for use during the August active shooter drill.

Tactical training for law enforcement was one of the steps along the way to an active shooter incident drill this summer in Warren County School District.

That event is in the past and involved agents from state, county, and municipal agencies as well as agencies in Chautauqua County, N.Y.

“Participants can expect each drill scenario to encompass a simulated active intruder incident in a school setting,” according to a district release. “The drill will begin with first contact, including the 911 call, and progress through all phases of an emergency situation which may include: emergency dispatch; law enforcement tactics; emergency staging; triage; rescue and removal; hospital coordination; and the beginning of student/parent reunification.”

There are two drills scheduled for the day — at 1 and 6 p.m.

Law enforcement agencies are asked to confirm their participation numbers in advance and individual officers are asked to check in an hour before their drill.

Participating EMS and fire responders are asked to check in at least 30 minutes before the drill.

District officials are hoping for a good turnout of fire and EMS responders, school officials, and others for the event. “We’re hopeful of a high level of participation,” Stewart said.

Buildings and Grounds Information Specialist Melissa McLean said she expects the participation to grow over time, and become popular with responders, much like the mock crash incidents held at schools each year.

The district is looking for volunteers to serve as victims, teachers, students, and others during the drills. Students in the district’s Protective Services program and City of Warren Police Explorers are expected to participate in the drill.

County Public Safety Director Ken McCorrison gave an update on the county radio project. He said he expects law enforcement to have the new radios in time for the drill and that testing — across borders and across agencies — has been very successful.

“There were a lot of different agencies represented there,” Chautauqua County Sheriff’s Office Sgt. Jon Desnerck said. “The agencies were integrated. Everyone just went out and did their job. As far as tactics, we’re all on the same page.”

“It was interesting to watch,” Warren County School District Superintendent Amy Stewart said. “Everybody coming together is a real positive.”

Trainers used a gun firing blanks during the training. For law enforcement, that was a popular change from previous drills in which the ‘bad guys’ used simulated ammunition like the ‘good guys.’

While simulated ammunition allows officers to shoot and see where those shots go, they do not result in much noise. “A big piece of active shooter is responding to the shooter,” Desnerck said.

“We want those blanks if we can get them,” Stewart said.