Village Missions Country Partners (Warren Christian Women) held its “Arrival of Summer” luncheon June 11 at the Allegheny Community Center. Lee Jones and Kay Gray greeted the guests at the door, and Lynn Espin led the opening silent prayer for the participants and friendships fostered at the center.

Karen Zurkan opened the meeting in prayer. Birdie Crandall, chair, stated that we are non-denominational and there are no membership or dues.

All guests are invited to a Friendship Prayer Coffee the third Tuesday of the month; this month the prayer coffee is at the home of Lee Jones at 9:30 a.m.

First-timers were presented with a candy rose by Helen Whitten.

The purpose of Village Missions is to provide donations to train pastors to serve rural areas in danger of losing its churches due to low enrollment, distribute Bibles to children, and teach those with little exposure to Jesus the scope of his love and his promise of eternal life if we get to know Him and accept Him as our Savior.

Two churches in N.Y. state have been helped by the group’s direct donations as reported by Rev. Bucci — one in Somerville, N.Y., and the other in Eden, N.Y.

To celebrate the Memorial Day holiday, Crandall shared the significance of leaving coins on a soldier’s headstone. A penny means respect, a nickel means that you and the soldiers were in boot camp together, a dime means that you both served together, and a quarter means you were there when that soldier died.

Mary Brown, of the Warren Women’s Care Center, was the featured guest who planned the mission of the center which is to love and support women through crises and women’s challenges during pregnancy. They are not an abortion service. The women take childbirth and newborn care classes, parenting classes, smoking cessation classes, and in return, the women earn credits to purchase diapers, wipes, baby formula, and other items. When faced with a new and unexpected pregnancy, women come to the center, and the center staff empower women and educate them to make clear choices best for them and their child and so they can become better parents. These women see only at the moment, and the center will educate them in a safe environment, love them, and help them get direction for their changes lives. The center is not pro-choice. It offers many services and support to make a woman feel not alone if pregnant or grieving after miscarriage or loss of a child.

Birchard sang her second song, “Ride Out the Storm.”

Following Birchard, Birdie introduced our spiritual speaker, Marilou Johnson of Lock Haven, who shared her message, “How did I Get into this Mess, and How Do I Get Out?” She said that we live in troubled times and under uncomfortable circumstances; therefore, these situations leave us feeling fearful, helpless, anxious, discouraged, hopeless, and they affect our past, present, and future. We need to put these situations in the hands of a faithful God.

Her own father became a preacher after a career as a pilot. She called him the Flying Evangelist. She focused on three different events where God stepped into hopeless situations. The message is “God is faithful for providing the way. The gift of God is the way to eternal life. The first was her orphaned father who was raised by an adoptive father. His wife ran off with a preacher, so his father had to raise his children alone, would not have anything to do with preachers nor taking his children to a church. Later in life, Johnson’s father eventually found and accepted Jesus and became a preacher himself. For Johnson, that was God persevering in a hopeless situation. A second situation involved a plane, for her dad was a private pilot. He let a cousin and his family borrow the plane. The plane was in an accident, and the family all perished and the plane was destroyed. He still had payment left on that plane that no longer existed. Years later an anonymous benefactor purchased a plane so her dad could continue his service of transporting people. Again, Johnson felt, it was a faithful God working his plan into our lives. Her third example of a faithful God was a story told by an African missionary of a preemie newborn fighting to survive in an underdeveloped country. The newborn’s mother died in childbirth, leaving a 2 yr old daughter, and the preemie struggling to survive. The baby needed warmth from a hot water bottle. There were none to be found as the only hot water bottle in the village exploded and tore due to tropical heat. There were inadequate medical supplies. Women of the village prayed for supplies from dropped packages and the children prayed for a doll for the 2 yr. old orphaned child. One day, a care package was dropped from the sky by service planes. The package contained bandages, a hot water bottle, and a dolly for the girl. It was a miracle the village women’s prayers were answered. Again, God prevailed.

Johnson closed with benediction and with Birchard’s ending song, “Life’s Railway to Heaven.”

The next luncheon, July’s “Patriotic Luncheon,” will be held Tuesday, July 9, from noon to 2 p.m. at the ACC with spiritual speaker Linda Fanton, Wellsville, N.Y., featured guest Gail Cowan of Youngsville with antique Marx toys, and musical guests Gary Wallin of Warren and Kay Jones of Clarendon. 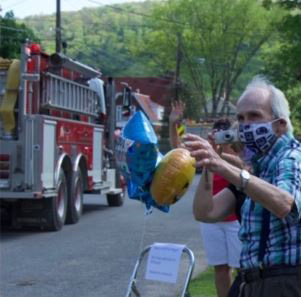