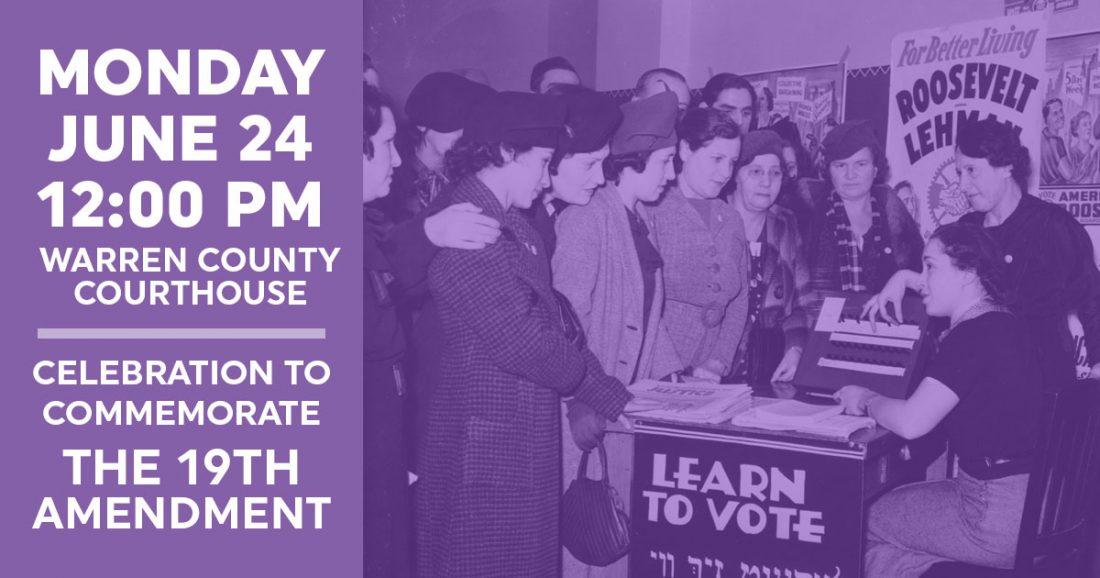 The bells will ring on June 24. Nineteen times, to be exact.

To commemorate the 100th anniversary of Pennsylvania’s ratification of the 19th Amendment to the United States Constitution — giving women the right to vote nationwide — the Warren County Commissioners, Elections/Voter Registration Office, and Warren County Historical Society have organized a Suffragette Centennial Celebration at noon on the courthouse steps.

Congress proposed the 19th Amendment on June 4, 1919. That, however, wasn’t enough to make it official. A total of 36 states needed to vote in favor of the proposed amendment in order for it to be formally ratified. Pennsylvania was the seventh state to vote aye, just 20 days later.

“Voting is one of our fundamental civil rights, and women suffered greatly to earn the right to do it,” said Lisa Rivett, Warren County Director of Elections. “Women died. They were beaten, jailed, and intimidated for demanding equal participation in the nation’s political process.”

Pennsylvania’s acknowledgment of a woman’s right to vote, she said, is an important thing to recognize.

In 1915, three years before Pennsylvania added itself to the roster of states willing to legitimize women’s participation in political process, the Justice Bell — commissioned by Katherine Wentworth Ruschenberger and cast by the Meneely Bell Foundry in Troy, N.Y. — was mounted on to a truck bed and toured through each of Pennsylvania’s 67 counties with its clapper chained, representing the silencing of women by the denial of their right to vote.

“This June 24,” said Commissioner Ben Kafferlin, “Warren County will ring its bells for all to hear.”

The event is to include the reading of a proclamation, as well as statements from local elected officials regarding the importance of participation in the political process by all citizens.

“Attendees are encouraged to bring a picnic lunch to enjoy on the courthouse lawn,” said Kafferlin.

In the event of inclement weather, a backup location will be determined and communicated to the public.