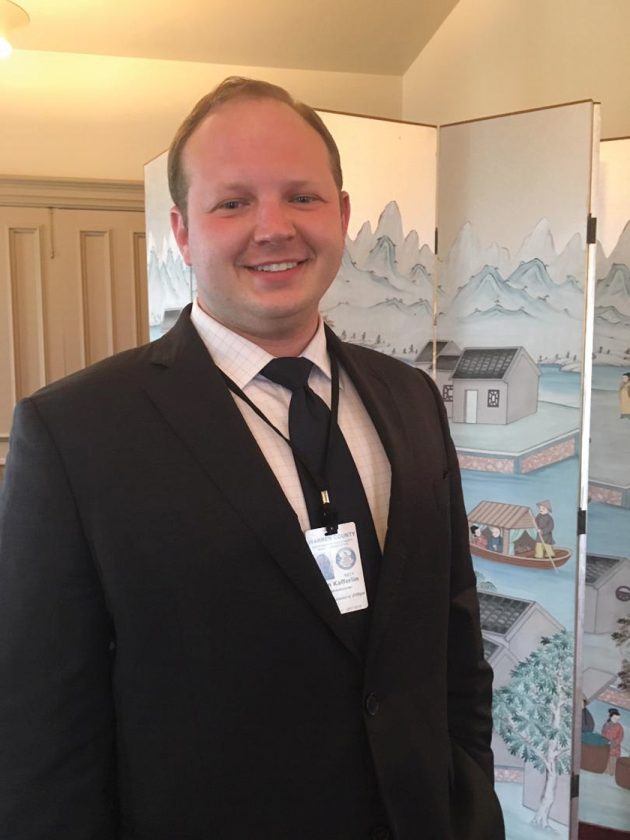 Warren County Commissioner Ben Kafferlin spoke at a recent meeting of the Woman’s Club of Warren on two subjects — The tornado which swept through the area the night before, and what he sees as the most urgent crises in Warren County.

In his capacity as Emergency Coordinator for Warren County, Kafferlin had been up for 30 hours straight, overseeing the response to the damaging winds that wreaked havoc on numerous businesses and residential properties. He answered questions about the storm and what emergency measures had been taken to address the various types of damage it caused.

After a brief overview of the county government’s function and the duties and responsibilities of county commissioners, Kafferlin spoke on the things he considers crises in Warren County.

First, he named pre-hospital care and the shortage of EMS volunteers. He stated that almost 50 percent of emergency calls are not responded to within 10 minutes. A regional call center may be the solution, he said.

Next, he addressed the county poverty rate and the effects it has on the community. Training is lacking among the least educated segments of the population, he said, and this demographic could potentially fill many of the unfilled jobs in Warren County.

He went on to state that helps for lower/middle-class citizens who want to own their own homes is needed, and also talked about the Local Economic Revitalization Tax Assistance (LERTA) program.

Finally, he raised the issue of behavioral health. The closing of Warren State Hospital released patients into the general population. Their difficulty adapting to life outside the hospital environment often leads them to commit crimes, and they wind up in jail. There, they cannot receive the help they need. Kafferlin said that re-opening the forensic component of WSH as a regional consortium might be an effective way to address this situation.

Club members adjourned to the dining room for “breakfast for lunch,” consisting of locally sourced bacon, eggs, and maple syrup, along with French toast. The meal was hosted by Karen Davis and Marge Himber, with food provided by Catering Plus. Daffodils, mini straw hats, and notecards featuring local sites decorated the tables.

Club president Carolyn Worley reminded members that the annual fashion show will be Thursday, May 9, at 5:30 p.m. “Let’s Go Retro” is the theme, and attendees are encouraged to dress in fashions from their favorite era. There will be a prize for best costume, as well as door prizes. Hors d’oeuvres and finger foods will be served. Tickets are available at the Woman’s Club office.

Walkers, canes, and crutches are needed for the Rotary Club, which ships these items to Africa. Other ongoing outreach includes collecting shoes for House of Hope and new or gently worn bras for “Free the Girls.” Donations of dry goods for the Salvation Army are always accepted.