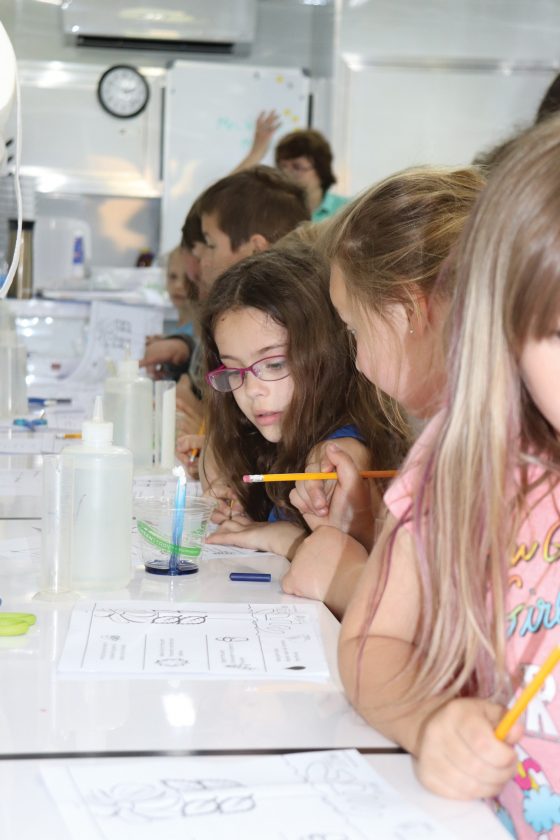 Students at the Tidioute Community Charter School (TCCS) have been buzzing like bees this week exploring everything from how the fruit is made to tracking down the source of contaminated well water in a simulation, thanks to a visit from the Mobile Ag Lab.

The Mobile Ag Lab, sponsored by the Pennsylvania Farm Bureau, brings agricultural sciences to students with hands-on experiments geared toward students K4-8. This year’s lab is being run by Cathy Vorisek in a brand-new climate-controlled trailer with twelve stations. Students work in teams of two to three students per station to identify a problem, research, hypothesize, and experiment to find a solution.

So far this week, TCCS kindergarten scientists learned about tree farms, while first and second-graders experimented with the capillary action that plants use to suck water through the roots up to all parts of the plant. Third and fourth-graders made butter. Fifth and sixth-graders used eggs donated from TCCS shop teacher Dave Manning’s farm to grade eggs according to FDA egg inspection criteria. Seventh and eighth-grade scientists tested well water samples and plotted results on charts and maps to determine how contaminants were getting into well water in an imaginary town.

Many students say they like the hands-on approach of the Mobile Ag Lab.

“I like the butter because we could eat it. It was good. I liked when we got to shake it. It exercised our arms,” said third-grader Haylee Riemenshneider.

Because TCCS is hosting the Mobile Ag Lab for the whole week, these budding scientists have the opportunity to complete as many as three different labs per age group. Some experiments let students explore how the foods they eat get to their table. Other experiments allow students to experience how farmers, government regulators, and scientists solve real-world problems in their communities.

“So far, I liked the egg experiment best. I already knew the anatomy of an egg from school, but this let me actually do something,” said sixth-grader Kenji Owens, 12. “I liked candling the egg and breaking it open to look at it.”

Vorisek adds that the students remember her as “The Bee Lady,” because she talks to them about the bee farm that she and her husband own. Bees are a frequent topic in the lab because pollination is crucial to agriculture. In fact, on Friday, Vorisek said she and her volunteer TCCS lab assistant for the week will be dressing up as insects for a Crawley Critter unit.

“We learned about bees and how the girls sting people when they die,” said second-grader Khloe Flick.

“Only the girl bees have stingers and the boys don’t,” fellow second-grader Gracie Mueller added, laughing. “The boys don’t have the right mouths, so the girls have to feed them. It’s kind of weird.”

TCCS has hosted the Mobile Ag Lab for more than six years. Mobile Ag Ed Science Programs has six mobile labs throughout Pennsylvania. They are so popular, that Vorisek says schools have to apply a year in advance for a visit. Manning says TCCS is applying for next year’s visit when the program will add four new experiments.