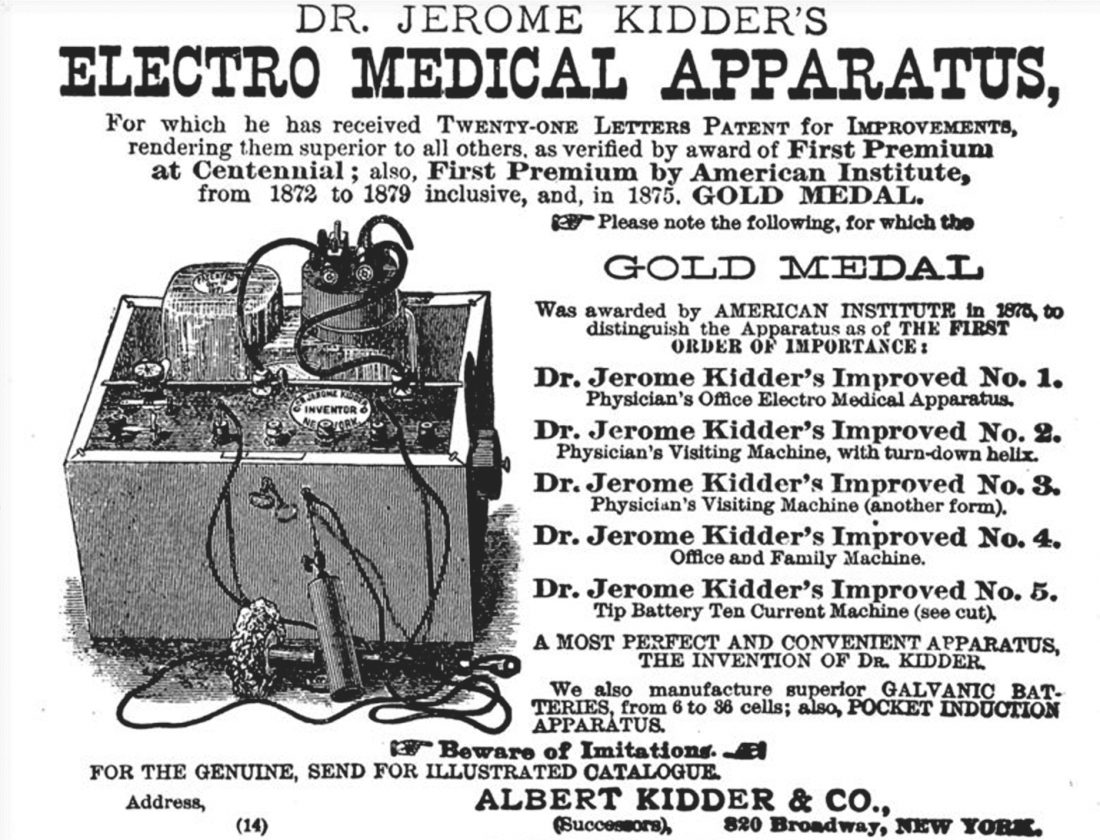 Many of the stories that occupy this space require connecting the dots. That’s the case with the story of Jerome Kidder, M.D.

We also know he died on May 13, 1879, at the age of 53 in New York City where the business you’re about to read about was located.

We know he’s buried at Oakland Cemetery and that his stone notes that he was “pre-eminent in electromedical science and invention.”

Here’s where the story gets weird – it’s tough to describe his inventions as anything but “quackery.” 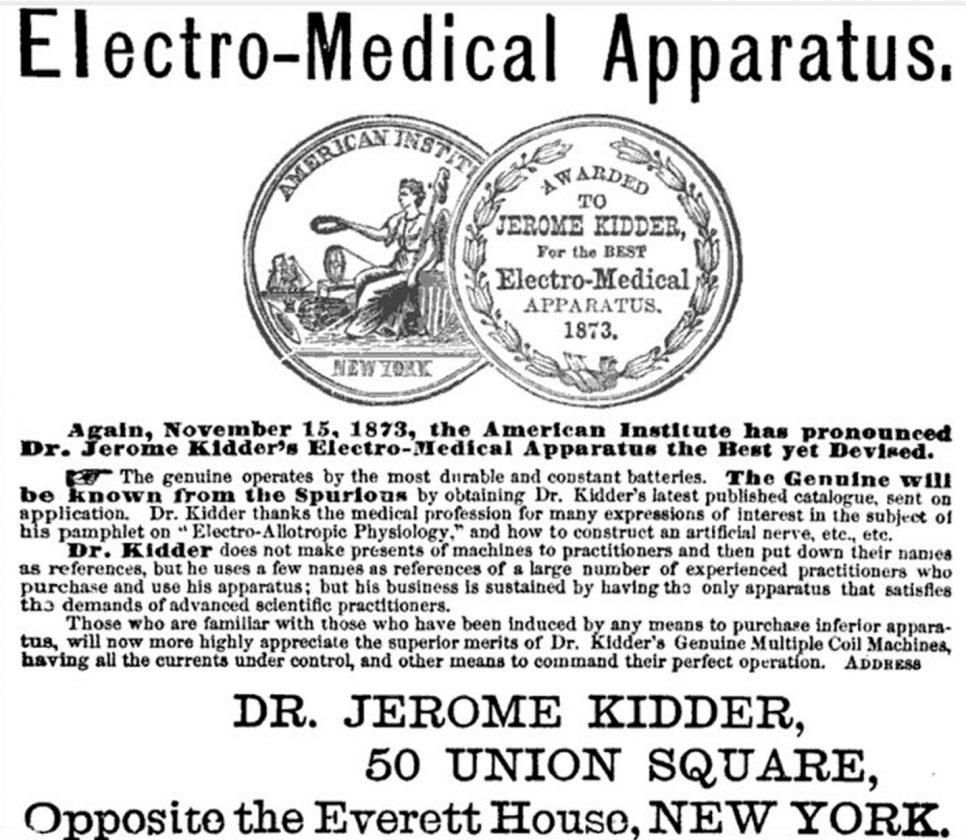 I can’t verify that Kidder actually went to medical school. I’m willing to give him the benefit of the doubt. Would you? Wait to read about his line of work before you decide.

The Wood Library-Museum of Anesthesia in Illinois gives some good background on one of Kidder’s machines that’s in their archive.

“Nineteenth-century Americans were fascinated by the promise and mystery of electricity,” the Museum states in a description of Kidder’s device. “In 1854, manufacturer W.H. Burnap produced a well-known electrotherapy device that was purchased by the general consumer as well as some physicians and hospitals: The Davis & Kidder Patent Magneto-Electric Machine for Nervous Diseases.” 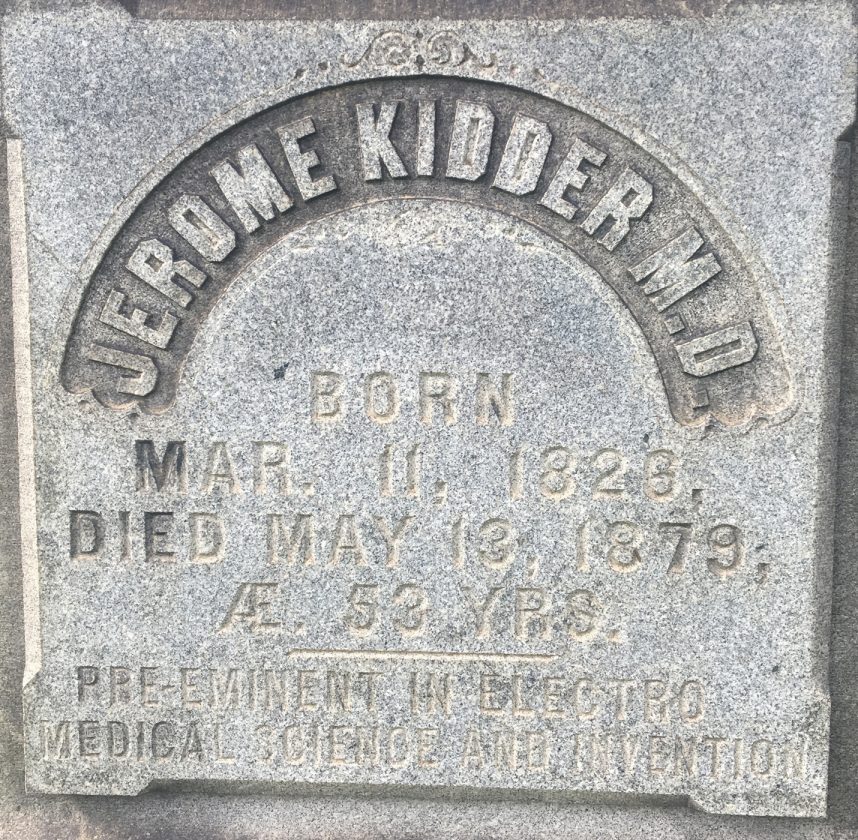 The Museum actually tells us how it works: “The operator of this electromagnetic generator would place handles in the patient’s hands or elsewhere on the patient’s body and then turn a crank to deliver a ‘mild’ alternating current to the patient. The force of the current depended upon the speed with which the crank was turned.”

Now when I first came across this story, I assumed that Kidder was an early state hospital doctor. But he died a year before the Warren State Hospital opened.

Then I concluded that with a name that includes “nervous diseases” that we were looking at early psychiatric treatment.

Well, that doesn’t appear to be what Kidder intended.

From the Museum: “The makers claimed that it could relieve pain, as well as cure numerous diseases, including cancer, consumption (tuberculosis), diabetes, gangrene, heart disease, lockjaw (tetanus), and spinal deformities.”

Can you see why I was hesitant to refer to him as a doctor now? By the way, the definition of quackery is “dishonest practices and claims to have special knowledge and skill in some field, typically medicine.”

If you don’t agree then please forgive my skepticism.

Apparently, I wasn’t the only skeptic as the Museum details the research that’s actually taken place on the therapeutic effects of electricity.

“Fortunately, serious study of electricity for medicine has also taken place,” they write. “Scientific investigations into the physiological and possible therapeutic effects of electricity have led to beneficial uses, including devices used by anesthesiologists to ensure that patients receive proper doses of certain muscle relaxants, to accurately locate nerves for the safe administration of nerve blocks, and to treat chronic pain.”

The Oxford University Journal of the History of Medicine and Allied Sciences published an article on electrotherapy history last year.

Referring to the device as the “medical battery,” they write that it “provided both direct and alternating current and was thought to cure a wide variety of ailments.

“The product occupied a unique space at the nexus of medicine, consumerism, and quackery: It was simultaneously considered a legitimate device by medical professionals who practiced electrotherapeutics, yet identical versions were sold directly to consumers, often via newspaper advertisements and with cure-all marketing language.”

The author notes that “medical textbooks and journals never mentioned (much less promoted) the home use of electricity” but added that the device manufacturers “sold a ‘family battery’ for patients to use on themselves at home.

That article notes that the “Jerome Kidder Manufacturing Company, a respected electromedical instrument manufacturer, devoted the first page of its catalogue to distinguishing itself from the “obvious humbugs and swindles,” warning readers to “beware of all the so-called electric pads, belts, bands, brushes, armadillos and garments, as they are made to deceive the public, and not for any Electrical effect.”

They also note that “even the Jerome Kidder Manufacturing Company, one of the most reputable manufacturers of high-quality batteries for the medical profession, occasionally took out advertisements in consumer publications stating that its product ‘conquered’ disease.”

Author’s note: In the name of full disclosure, there was another Dr. Jerome Kidder in the 19th century. He was a surgeon who traveled the world and is more known as an astronomer. I don’t think that’s our guy.