‘Are you challenging yourself?’ 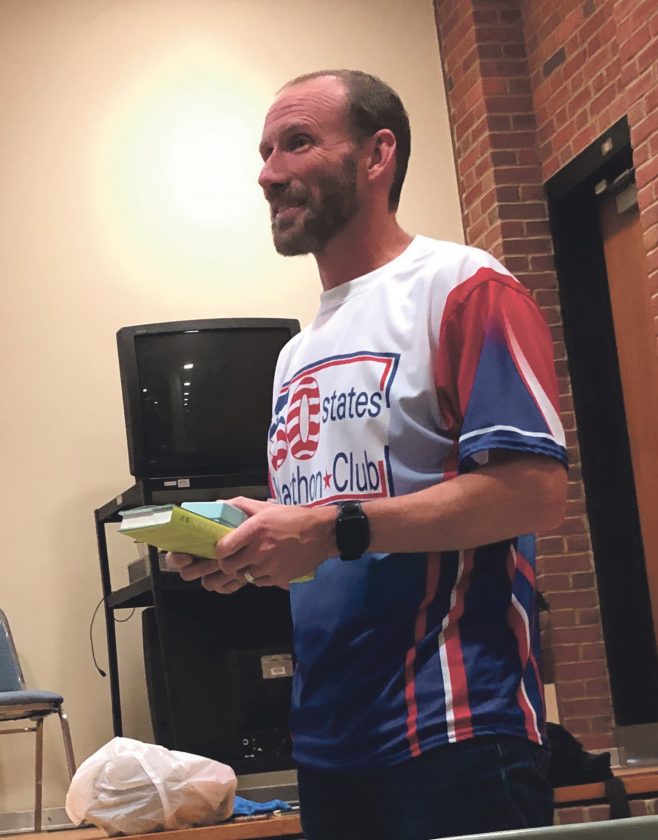 Running Revolution kicked off this past Thursday, April 25, with guest speaker Dr. James Roberts speaking on “Goal Setting and Achievement.”

Running Revolution is a 10-week training program aimed toward empowering women. It encourages women to move toward greater physical, mental, and social well-being.

Participants can choose to run, walk, condition, or a combination.

The “revolutionaries” meet every Thursday. This year’s programs will conclude on June 27.

Revolutionaries are invited to stay an extra half hour to get to know one another and enjoy a post-workout recovery snack.

The guest speaker who kicked off the 2019 Running Revolution, Dr. Roberts, has spoken in front of the revolutionaries each of the 10 years the program has been around.

Roberts is a Warren resident, and Edinboro University Exercise Science Professor and Chair. He spoke to revolutionaries on his recent accomplishment of a 16-year goal. He also spoke on goal setting and motivation.

Roberts completed the Maui Oceanfront Marathon in January of 2019, completing his goal of 50 marathons in 50 states. He is the 1,469th person to accomplish this feat. He finished first in his 45-to-49 age group with a time of 3 hours and 41 minutes. He placed 25th overall in the Hawaii marathon.

Roberts began his marathon journey with his first marathon in 1986 in the Erie Marathon on Presque Isle. He ran seven marathons in 2018 in the progression towards his goal. He has completed 57 marathons overall including running the original marathon course in Athens, Greece.

“It took me longer than my Ph.D. and pretty much any other goal that I’ve had in life, other than just keep living and breathing,” Roberts said of 50 in 50.

“I use a SMART acronym for goal setting.” (SMART stands for Specific, Measurable, Action, Realistic, Time-bound).

“I make a word document each year to set financial, athletic and relationship goals,” said Roberts. “I just keep working and checking them off, add to them, modify them.

“I’ve had a lot of failures also, but if you have 10 goals and you fail at four of them, that means you’re still making progress at six,” he said. “Life’s still pretty good.”

Roberts has set new athletic goals now that his marathon stuff is “done.”

He plans to set a personal record in a half-Ironman in June with a full one set for August.

“I previously signed up for an Ironman and didn’t finish it, that’s one of the failures. I tell a lot of people it’s my unfinished business and I don’t like having something sitting out there I wasn’t successful at,” said Roberts.

“You know people talk about who’s the greatest of all-time, who’s the fastest, but it doesn’t really matter. Are you challenging yourself? That’s what really matters,” said Roberts.

“If you’re challenging yourself to improve and you’re setting goals and you’re going there that’s great. Goal setting is hard work, it’s not whether you’re smart or not, it’s whether you keep getting back up and working towards those things.”