‘A small and brief utopian settlement... near Lander’ 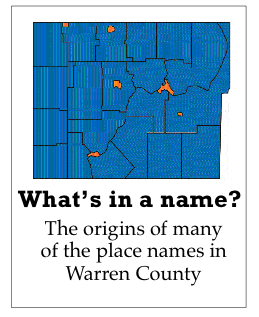 So far, we’ve written about the names of places that you know.

But there are many more that no longer exist.

In many instances, those towns/crossroads/communes present far more interesting stories than the places we know today.

Like Alcuin — named after an English scholar who aided Charlemagne in the 8th century.

Apparently, Alcuin caught Ernest Miller’s attention, too; he wrote an article about all of the utopian communities that have popped up in Warren County for the Western Pennsylvania Historical Magazine.

Miller — who was president of West Penn Oil “and a historian by avocation” — also wrote the place names article that served as an inspiration for this series.

So, what’s Alcuin, or the Alcuin Community?

“A small and brief utopian settlement on the Homer Preston farm, near Lander, Farmington township.”

We don’t often (with a few exceptions – Jonestown being one of them) think of self-proclaimed utopian communities as part of modern life but Alcuin came into existence right before World War II.

The commune described itself as “a craft agrarian community, in the spirit of Saint Benedict and after the patters of the Danish folk school.”

It was started in 1940 by transplanted Roman Catholics from New York City.

“The land consisted of 326 acres of farming land near the village of Lander, in Farmington Township, and was originally part of the Homer Preston farm. The place had been given to the Order of St. Benedictine, Inc., St. John’s Abbey, of Collegeville, Minnesota, in 1939 by Gilbert Winkelman who had previously joined that Order,” Miller wrote, explaining that a man named Ray Scott of Chappaqua, New York lead the group.

He came to an agreement with the Order on a series of conditions, according to Miller’s article: an application was required and, once accepted, individuals would be given “choice of any unallotted parcels” not to exceed two acres. They were then required to build a home on the property and “shall thereupon be given free use of the land so allotted so long as his family shall occupy said home.”

Plans for buildings required approval from St. John’s Abbey and “a proportionate share in common of the use of the common lands is guaranteed everyone holding tenure…” The plan called for the deed to be transferred to the community when 15 families took up residence.

The first six residents arrived in February 1940, “and made their residence in the large fourteen-room farmhouse on the place,” Miller wrote. “Most evenings the group held a brief religious service in the house… Upon arrival the group members talked with the community leaders in Lander, explaining what they had in mind, and they were cordially received.

“At the most, the settlement had six families plus two single men as members,” he continued. “Some came and come went. Some disagreed with the program, others could not stand the difficult work, all were inexperienced… One family started to construct a home on the farm, but this was never finished.”

And it impacted the commune tool.

“Some of the men were drafted, others who had become discouraged left to take good-paying jobs in a booming industrial activity short of help; when recruits could not be obtained due to the conditions at the time and the farm deteriorated,” Miller said. “From time to time, several religious objectors were at Alcuin; they objected not to being in the armed services but only against bearing arms and later they served in the medical corps.”

Miller interviewed one of the first arrivals, Mr. Robert Sukoski, in 1964. Sukoski reported entering the army in 1944, losing an arm in combat, and returning to the farm and purchasing it after the war. He sold it to Calvin Penley, and county assessment records include a Calvin Penley as once owning property in the area of Old State Road.

“Looking back a quarter of a century, Mr. Sukoski… reflected that while the war proved the beginning of the end for the Alcuin experiment, inexperience was certainly another important factor. The two acres allotted each family was insufficient and the brothers at St. John’s, from centuries of such experience, had urgently suggested that 50 acres be allowed each family rather than merely two. But Mr. Scott had wanted to stress the communal aspect of Alcuin and felt that a small acreage per family might tend to bind the group closer together.”